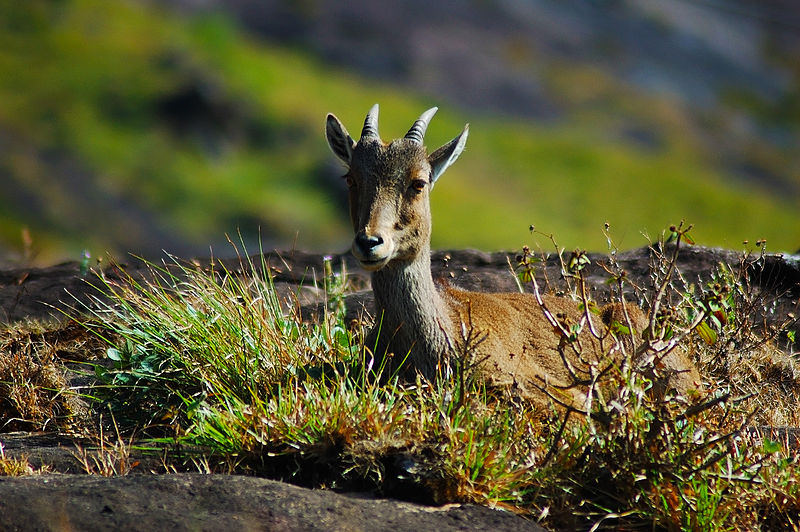 The Eravikulam National Park is located in the Idukki district of Kerala in India. The Park is spread over 97 sq. km of area that includes rolling grasslands interspersed with Sholas, which is the local name for the patches of stunted tropical montane forest found in the region. The area is rich in flora and fauna with some of them being endemic to the place. Due to these reasons, the park is quite popular amongst eco-tourists as well as those who appreciate wild facet of nature.

The Park is home to a wide variety of vegetation, which can be broadly classified into three sections: grasslands, shrublands and forests. The area above 2000m is predominantly covered by grasslands with small patches of forests found in the hollows and gullies, The deep valleys are almost exclusively forested. Shrublands are mostly found along the base of cliffs as well as in the rocky areas.The park is home to nearly 29 species of mammals out of which five are endemic to the region. Some of the commonly spotted animals in the Park are the Nilgiri Tahr, the Sloth Bear, Giant Squirrel, Nilgiri Langur and many more. The national park has also recorded approximately 140 species of birds, out of which 10 are unique to the Western Ghats. Some prominent species of bird in the park are the Nilgiri Pipit, White-Bellied Shortwing, Nilgiri Flycatcher and more. There are also more than 100 varieties of butterflies with 20 different species of amphibians in the area.

The Eravikulam National park is divided into three sections: the core area, the buffer area and the tourism area. The tourism area is also called the Rajamalai area. It is the region where one can spot the star attraction of the park, the Nilgiri Tahr – a cliff goat that is now an endangered species. One can also view the Anamudi Peak from this zone. However, entry to the peak is restricted.

One can also go for trekking along the Kurinji Trail, which is a soft trek through the Nilgiri Tahr and the Kurinji-filled grasslands. One can also choose the Cascade Walk, which takes tourists though lush forest paths that meander along the Lakkom Waterfall. An eco-shop and a cafeteria greet the tourists on their way. Those who believe in capturing live moments, the area around the waterfall suits them best. Tourists can also choose to stay at the Lakkom Log House that provides all the amenities to ensure a comfortable stay.

While most tourists prefer to take a safari tour on a bus, there are others who want to explore the place on their own and go for a day-long trek.

Photography is allowed inside the park

Where is Eravikulam National Park?

The Eravikulam National Park is located in the Idukki district of the state of Kerala in India. The Park is in the midst of the Western Ghats that run along the western coast of India.

Road: The closest major town to Eravikulam National Park is Munnar, which is about 13 km or approximately eight miles away. The park is well connected to other parts of Kerala as well as the neighboring state of Tamil Nadu. Inside the park, there are several roads, many of which are in the tourism area.

Rail: The railway station closest to the national park is Alwaye in Kerala.It is about 120 km or 74.5 miles away. The next closest station is Coimbatore in Tamil Nadu , which is approximately 160 km or 99.5 miles away.

Air: The nearest airport to the park is Kochi, which is about 148 km or about 91 miles away. Coimbatore Airport in Tamil Nadu is 175 km or about 109 miles away from the park.

Park remains closed in the months of February and March.

Except Lakkom Log House, there are no arrangements for accommodation inside the national park. However, the nearby town of Munnar offers plenty of options to tourists.

Tourists are free to visit any time. However, Eravikulam National Park is closed in the months of February and March. This is because of the calving of the Nilgiri Tahr.