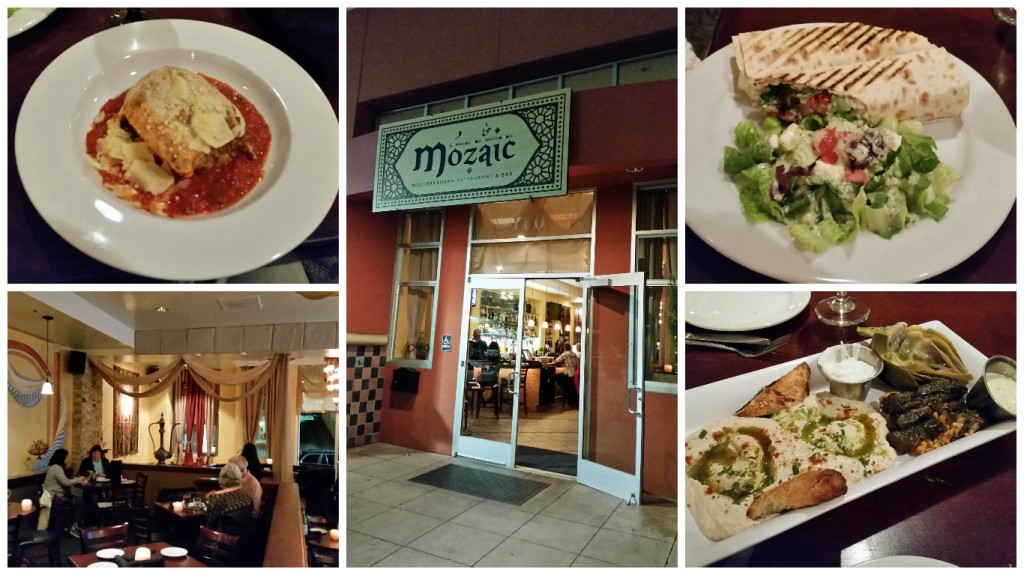 Mozaic is the latest incarnation in a location that’s seem at least three different restaurants in the past ten or so years. First, it was Clouds, a nice, upscale, downtown-business-networking kind of place. Clouds gave way to a New Orleans-themed place, which I reviewed – Louie’s Cajun. That place departed last year, to be replaced by a new place, Mozaic.

Downtown Santa Cruz, right off Pacific and right across the street from a parking garage. If you’ve got a credit card or two dollars, you’re all set for parking.

Still changing. To quote a newspaper article about the restaurant’s opening “Open at 11 a.m. daily, and closing time varies depending on how busy they are. For now, they’re estimating 9ish for weekdays and 11 or midnight on weekends.”

A nice, open two-level space which is sort of nondescript, except for the enormous, multicolored mural that encircles it, covering every wall. The bar is also enormous, and backlit, giving the place an interesting, modern feel. What would be a big, open dining room is divided up into several sections by low walls, railings and so on, which breaks it up nicely. The feel is contemporary and busy – not especially Mediterranean, but that’s fine – a little of that goes a very long way.

Fine. There was a team of servers, who worked well together and knew their stuff. This included the owner, who actually delivered our entrees. This same guy also specialized in serving an appetizer that was apparently some kind of cheese hosed down in something flammable and ignited, which was good pyromaniacal fun.

Moderate. $78 for two, without dessert but with drinks.

Nicely done proto-Mediterranean. The menu seemed to combine Italian, Greek and a few other things. There’s something there for everyone, but it’s not what one traditionally thinks of as “Mediterranean” – i.e. Greek. To some extent this is a good thing, but it’s also not strictly what they say it is, which merits mention as well.

At the suggestion of our server, we started with their big Mezza Platter, which is a sampling, basically, of everything they do. It included a lovely bowl of perfectly prepared, perfectly warmed pita bread, some hummus, some stuffed grape leaves, some baba ganoush, a baked artichoke, and some other items. This was a hearty, really delicious way to start a meal, and for two people who weren’t especially hungry (not us) this could actually serve as the entire meal. There was a LOT of very rich hummus, grape leaves that were perfectly prepared, and a general sense of abundance that was a really nice start to the meal.

My entrée was moussaka – a Greek variant of lasagna, basically, including eggplant, a crust, ground meat and apparently a béchamel sauce. This version was great because although the portion wasn’t huge, it was a rich, hearty, satisfying dish that didn’t include all the flaky/crustiness that sometimes makes Greek pastry dishes hard to eat. This was just plain good, and it lasted about one minute.

Beth had a kebab wrap, with a simple side salad. The wrap was nicely done – thick, heavy-ish pita bread, surrounding a kebab combination, perfectly done. Again, as with both the appetizer and my entrée, what made this dish work was the overall richness of it. This isn’t overly spiced or vinegary Mediterranean food. This is food meant to be eaten by hungry people, savory and substantial.

Mozaic is a winner. They tried hard, the food was great, and the prices was right. Recommended.