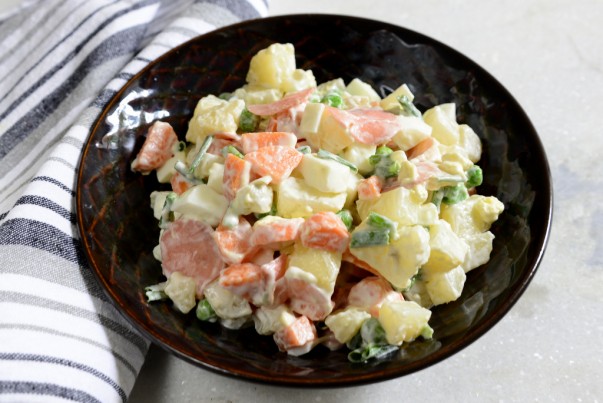 Russia is one of the northernmost countries with a harsh climate for most part of the year. Russian cuisine has its origin in the peasant population that used various meats, rye, barley, millet for making breads, beer, vodka, etc. Over the years, several ingredients made inroads into Russian cuisine and more varieties were included in its dishes.

Russian meals generally consist of soups along with main dishes and salads. The soups are served both cold and hot. Okroshka, Tyurya, Ukha, and Noodle soups like Lapsha, Shchi (cabbage based soup), and Solyanka are some common soups. The main course includes dishes such as Pelmeni, Kholodets, Kotlety, and Shashlyk. Breads are also common in Russia along with porridge. Some of the common breads include Pirozhki, Syrinki, and Blini. Salads such as Olivier Salad and Dressed Herring are also common.

For today’s recipe, I chose one of the most common salads called Russian Potato Salad or just Russian Salad. In Russia, this traditional salad dish is more popularly known as Olivier Salad. This salad is an absolute must for the New Year buffet in Russia and is prepared with mayonnaise mixed with potatoes, carrots, peas, pickle, eggs, and sometimes with added meat. It is quite a simple recipe and can be made in no time. Make sure to use this Russian Potato Salad Recipe in your next international buffet spread or just enjoy it any day for a perfect Russian taste.

How to Make Russian Potato Salad 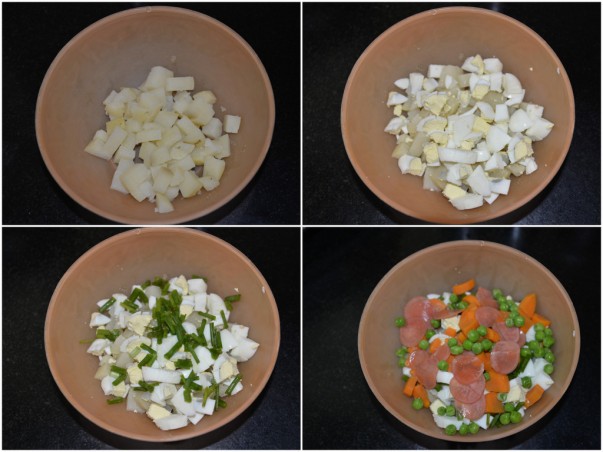