Home » 5 Weird Rituals and Traditions Around The World

5 Weird Rituals and Traditions Around The World

Continents are drifting. And so are people. Drifting along, and rubbing a little bit of themselves onto others. Food moved fastest. Indian Chicken Tikka Masala took Britain by storm while Indians fell head over heels in love with McDonald’s and KFC. Thereafter came economy and education. The world begrudgingly surrendered to China’s manufacturing might, and international student exchange programs brought beautiful European and African students to Asian shores. While the former kept choosing to quickly leave the latter kept choosing to never budge. TV shows like Citizen Khan, and Mindy Project became hugely popular in the USA- a sign of America’s gradual acceptance of Asians into mainstream American life.

The stereotyping though, refused to stop. Indians do not wipe, Dutch are the most tight- fisted of all, and all Brits talk either like a cockney or an aristocrat. The stereotyping often hurts, but it is also one culture’s way of sizing another culture up- the first step towards an amicable relationship.

So let us look at a few ‘shocking’ traditions in cultures around the world- and accept the rest of the world for what they are. If not, humanity would be one big colorless and mirthless race.

Where: Solapur, India
Why: Supposed to bring good luck.
In Defense: Practiced in a couple of villages in the heart of Maharashtra, 99.9 % Indians do not approve of this.

Babies are tossed from a 30- foot high temple balcony. Religious affiliations do not matter. Hindus and Muslims alike vouch for the positive fruits of this bizarre and extremely dangerous ritual. A person (mostly the zealous father) scales the walls of a temple, with his baby in a bucket tied to his back. As if being subjected to the hazardous journey was not enough, the poor little baby, held by his hands and feet, is swung to and fro as you would swing a sack of flour and finally, amidst a chorus of praises to the Almighty, heaved downwards. A group of 10- 15 alert men catch the bay on a spread out blanket, just in time to prevent any harm.

The tradition has been going on for generations now, and luckily, no baby has been harmed till date.

We say: Luckily these guys still retain a grain of logic, and hold out the blanket. Also, only babies up to two years can be blessed in this manner. Phew!

2. 'Blackening' the face of the bride/ bridegroom, Scotland

Where: Orkney, Aberdeen and Grampian, Highlands, Outer Hebrides, Angus and Dundee, Fife
Why: To dissuade competing suitors.
In Defense: Chill, it is no worse than the mad American bachelor party.

How desperate can you be to marry someone? Very- seems to come the answer from Scotland. In parts of Scotland, bridegrooms (and often, the bride too), are ‘blackened’ on the day before their wedding using all kinds of foul smelling stuff- egg, soot, flour. Anything you can think of that will uglify the soon- to- be- wed pair. Make sure the person is at his/ her unattractive best to shoo away over- optimistic beaus who simply refuse to give up.

We Say: Sure your stylist is going to charge you double on the marriage day- turning your stinky self to a paragon of beauty. 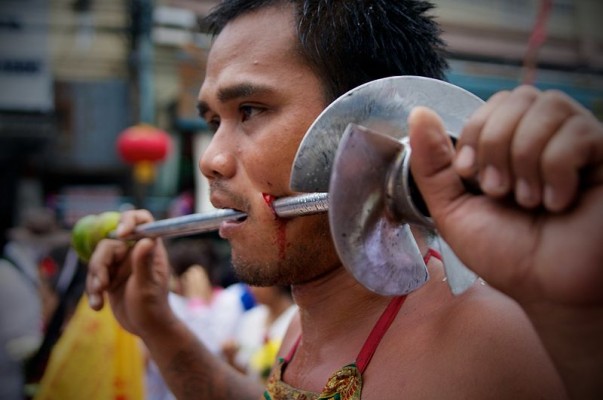 Where: Phuket
Why: To invoke blessings of the Hindu gods
In Defense: With all the mythological stories of famous saints putting up with great physical pain to please gods, doing the rounds, it is only fair that ordinary mortals too will try the same.

A nine- day vegetarian festival in the month of October that is said to have begun when a traveling opera group was struck by malaria, and changed to a vegetarian diet- after which they recovered. Hindu people in Phuket stick to a strict nine- day vegetarian diet to please the Hindu gods. But the antics the impassioned devotees perform definitely do not behoove a leaf- eating, mild- mannered crowd. People pierce their cheeks with knives, spears or anything they think is good enough to stab their faces with. They walk on burning beds of charcoal and up bladed rungs of ladders. Such penance please the gods, they think.

We say: Well, at least it takes our attention away from other things Phuket is famous for! 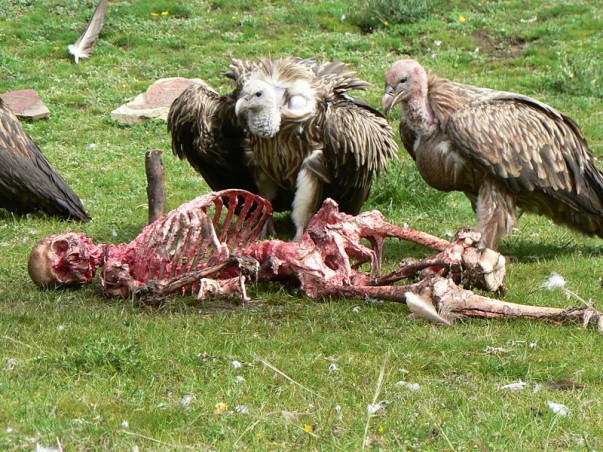 Where: Drigungtil Ogmin Jangchubling Monastery (Drikung Thil Monastery), and in a few other select locations.
Why: In keeping with the Buddhist philosophy of giving to the world, even after death.
In Defense: Keeping silly sentimentalism aside, this is most ecological and cost- effective way to dispose of a body.

The Sky Burial or Jhator as it is called in Tibet, is, perhaps, the most cold- hearted way of disposing of a dead body. Jhator means giving alms to the birds. The corpse is taken to a mountain- top and cut to pieces with precision- in a way that makes it easy for vultures to devour the body. Sometimes, the body and bones are cut to pulp to make it easier for vultures and crows to devour. In Tibetan folklore, vultures are angels who tear open the body to carry the soul to the angel. It was criminalized by Chinese authorities in 1960s as a barbaric act, but was again allowed after 1980. The sight though, of a body being cut to pieces, and then being fed to vultures, is too gory, for an outsider.

We Say: What about when paranoid nations burn alive millions of men, women and children, and wipe out entire towns? To add insult to injury, they even flaunt the mass massacre as an instance of how socially responsible they are as a nation.

Where: Maasai Mara
Why: Rich source of protein.
In Defense: We cannot defend the cruelty here, but surely you must have heard of blood sausages in the west.

What would you say to the sight of a pail on the ground below a cow? The pail is not only catching the milk from the cow's udders but also the blood flowing from a cut in its body. And the cut is not accidental either. Welcome to the diet of the Maasai people. What gets our attention is the way blood is procured. The animal is not killed but its jugular artery is nicked in a way that allows blood to flow out without letting the animal die. Well, this is called having the cow and drinking it too.

The Maasai lifestyle is dependent largely on livestock- such as cattle, goats and sheep. Their economy as well as diet revolves around livestock. Not only do they consume milk, but drinking the cow's blood mixed in milk is a common practice. Blood is also consumed raw as well as cooked. Why, it is downright silly to kill a cow simply for its blood, when you can keep it alive and make it slog like a donkey, while savoring its milk and blood at the same time.