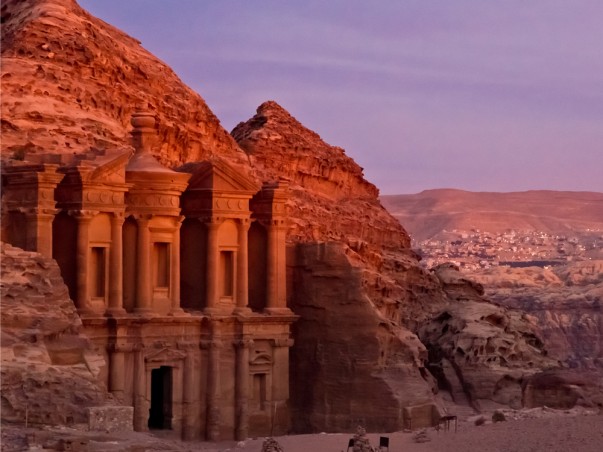 Archaeological Ruins of Petra in Jordan

The spectacular archaeological ruins in the Middle East, Petra (Jordan) represents an ancient Arab culture and architecture that flourished more than 2,000 years ago. Featuring several rock-cut buildings and structures, this city from the bygone era is located on the slope of the biblical Mount Hor in Jordan. It was built by the resident ancient Arab tribe named Nabataeans, who were initially nomadic but industrious. The valley in those days fell on the famous trade route linking Egypt, Rome, Syria, and Greece with China, Arabia, and India, better known in history as the Silk Route.

Petra for almost five centuries was hidden to the outside world, until its rediscovery by a Swiss explorer named Johann Ludwig Burckhardt in 1812. It is therefore called the ‘Lost City’. Since, its introduction to the west, Petra has become Jordan’s top tourist attraction. Today, it’s mesmerizing grandeur has made it a UNESCO World Heritage Site (1985), and one of the New Seven Wonders of the World (2007).

Petra is alternatively known as the Rose Red City, owing to its buildings that are carved into rose-red colored sandstone hills. The red-tinged mountains surrounding Petra on its three sides make it look like a fortress. Nabataeans made good use of this fact and used a unique hydraulic system to preserve water, thus creating an artificial oasis. The Silk Route traders used this city for resting and trading various items. With high economy came valuable treasures and antiquities. A number of buildings and monuments were built. Petra is believed to have been one of the most affluent cities during the 1st centuries BC to AD, with a population of almost 30,000 people.

Petra saw its decline from the 3rd century AD onwards, which happened due to several factors, beginning with the change in the trade route from land to sea. The city also experienced a number of earthquakes that led to the destruction of many of the buildings and its evacuation in the 6th century AD. The buildings that were carved into the cliffs were naturally saved and are still standing. Many of its carvings though are lost due to pollution, weathering, and robberies.

The entrance to Petra is dramatic. You have to walk through a narrow gorge of more than 1 km. This gorge is flanked by tall cliffs of about 80 km, and is called Siq. Your first peek of Petra (and first view of the Al Khazneh) comes while you are nearing the end of the Siq.

Al Khazneh and Other Buildings of Petra

Literally meaning the ‘Treasury’, Al Khazneh is a must-see in Petra. Carved straight out of a cliff, this monument’s facade is an impressive piece of Greek-influenced architectural engineering. It is believed to have been built as a mausoleum at the start of the 1st century AD. The gunshots that you see on the facade were to find a treasure.

While walking down the Petra passageways, you will come across more than 800 structures like tombs, temples, churches, public buildings, a 3,000-seater amphitheater, and a monastery (Ad-Deir Monastery with 800 steps). You can also see here diversion dams, channels, and networked cisterns that were used to conserve water from the seasonal rains.

After sun-down, Petra gives you other enchanting reasons to visit or stay (if you came during the afternoon). You can watch the unique monuments and passageways illuminated with thousands of candles.

If you are an Indiana Jones fan, you may feel that you are enacting a scene out of the film Indiana Jones and the Last Crusade while entering through the Siq and peeking through the Al Khazneh. In the movie though, this was the Canyon of the Crescent Moon. Other movies featuring scenes influenced by the breathtaking sites in Petra include Transformers: Revenge of the Fallen, Arabian Nights, and Mortal Kombat Annhilation.

Apart from movies, Petra has also inspired poets like J.B. Burgon (which won him the Newdigate Prize), musicians like the Rahbani brothers from Lebanon, comics like The Adventures of Tintin (The Red Sea Sharks), and novels like Appointment with Death by Agatha Christie.