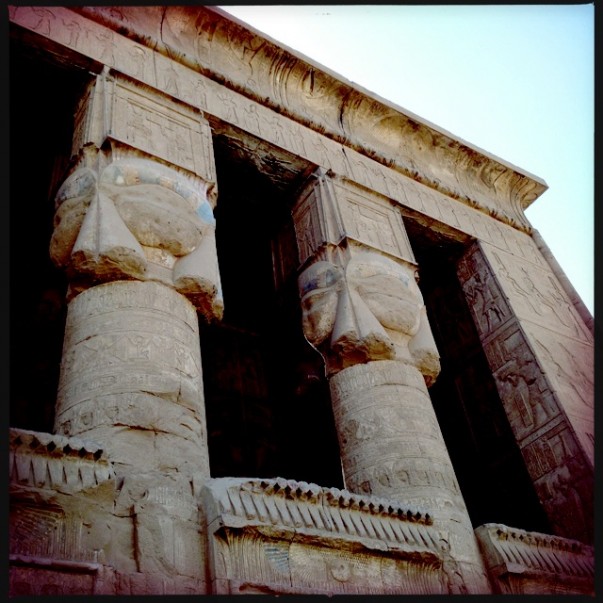 The Temple of Hathor is one of Egypt's best preserved ancient temples.

The Temple of Hathor is located in the village of Dendera, some 40 miles north of Luxor on the west bank of the Nile.

Though its architecture is typical of other temples from the Graeco-Roman Period, it's one of the best preserved of these remaining temples due to its late construction. The temple is dedicated to the goddess Hathor and her mythological relation with her consort Horus of Edfu. Work on the temple began before the reign of Ptolemy VIII Euergetes II, whose name can be found in the crypts, and carried on during the rule of the Ptolemaic kings. It's believed that work on the temple was completed during Roman times.

The facade of the main temple is divided by six columns featuring the head of Hathor and leads straight into another hall containing 18 columns similar to those found at the entrance.

The ceiling of the first hall is really fascinating especially for those interested in astrology because it is divided into seven scenes featuring the goddess Nut, vultures and winged sun-discs along with the Roman signs of the zodiac.

Further into the temple, a passageway opens up to 11 chapels dedicated to different divinities and religious symbols. The most important of these is the chamber that sits right behind the sanctuary, which housed a shrine containing images and symbols of Hathor.

Beneath the floors of the chambers are 14 crypts that would have been used stored the treasures of the temple. Egyptologists believe that some of the most secret and divine of all rituals were carried out within the walls of these small chambers. One of the crypts is currently accessible and during quiet times you can go down into it. The musty air feels like it could be reminiscent of the conditions experienced by those in ancient times so it's well worth a visit to get a taste of one of the aspects of life in the times of the pharaohs.