What were the Main Conflicts in the first Decade of 2000? - Answers 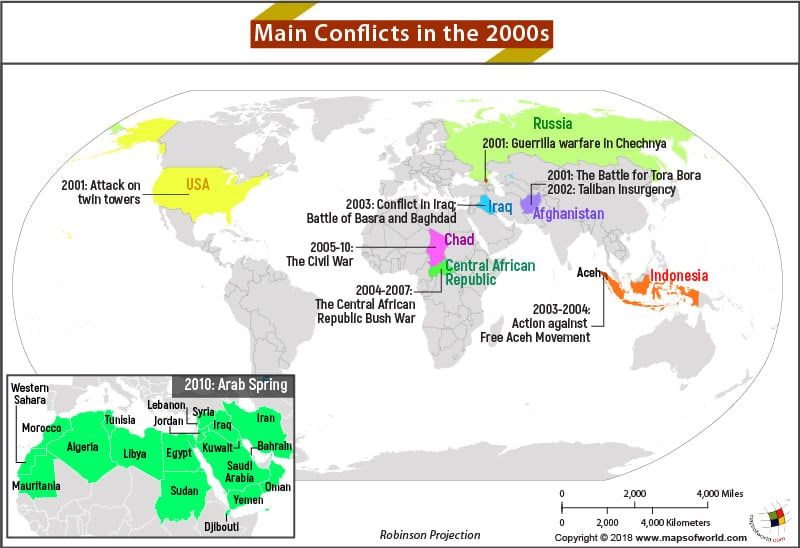 The decade from 2000 to 2010, saw the conflicts in various parts of the world but the most violent occurred in Afghanistan, Iraq, Chad, and Chechnya. In the closing days of the decade in December 2010, the Middle East was rocked by a single event that triggered the Arab Spring, impact of which was felt across most Arab states in the Middle East.

After Chechen Islamic militants entered neighboring Dagestan in 1999, Russian forces reentered Chechnya in what is referred to as the Second War of Chechnya. Between 2000 and 2009, the region saw Chechens take on Russian forces in an extended insurgency. Officially, the conflict ended in 2009, but sporadic local resistance continues.

On September 11th, 2001, Osama bin Laden-led Al Qaida launched an audacious attack on the twin towers in Manhattan, driving two commercial aircrafts into the buildings and brought down the twin towers and resulted in the deaths of 2,996 people and over 6,000 injured. It triggered an American military response that was to culminate in the US forces entering Afghanistan and being drawn into a protracted insurgency conflict with the Taliban and other militant groups which continues to this day. The military intervention in Afghanistan has triggered hardline Islamist militancy in many parts of the world.

2001: The Battle for Tora Bora, Afghanistan

From December 6th, 2001 to December 17th, 2001, the U.S. forces launched airstrikes in the mountainous region of Tora Bora where elements of Al Qaeda and the Taliban sought refuge. This was to be the beginning of an offensive that would see the United States enter into a conflict that remains active till date.

The hills of Tora Bora are the same region from where the Mujahedeen had successfully launched attacks against the Soviet forces during their invasion of Afghanistan. The airstrikes in December were followed by a ground offensive forcing Al Qaeda and the Taliban, which had earlier taken control over most parts of Afghanistan, to begin withdrawal to the mountains of Tora Bora.

The airstrikes were largely successful in eliminating the Taliban’s ability to conduct organized warfare, and it resulted in many moving across to neighboring Pakistan, from where they began a new phase of insurgency against the Afghan government and the U.S forces.

This was the beginning of a long drawn insurgency by elements of the Taliban operating from within Afghanistan and Pakistan. Tactics used was terror attacks through suicide bombings, roadside IEDs, and shoulder-launched rocket attacks on civil and military targets. The US forces took the brunt of these attacks, along with coalition forces that were operating in Afghanistan. Relations remained strained between the governments of the United States, Afghanistan, and Pakistan, as forces on the ground tried to cope up with growing casualties.

2003: Conflict in Iraq; Battle of Basra and Baghdad

This was followed by the Battle for Baghdad, the capital city of Iraq. On April 3rd, 2003, the coalition forces led by the US 3rd Infantry Division commenced the battle for Baghdad. After intense resistance, Baghdad fell to coalition forces by April 14th, 2003. After the initial euphoria, the US forces got drawn into a long insurgency battle which resulted in significant human and financial losses.

On December 4th, 1976, the Free Aceh Movement, also known as GAM, launched an armed resistance against the Indonesia government with the aim of creating a separate Aceh state. This was to be the beginning of a three-decade-long armed resistance movement which had GAM members suffering major losses at the hands of the Indonesian Army.

The CAR is a landlocked country sandwiched between Chad to its northwest, Sudan to its northeast, South Sudan to the east, DR Congo to its south, and Cameroon to its west. In 2003, Françoise Bozizé led a rebellion against the Presidency and was the beginning of conflict for control over CAR and would last till 2007.

The rebellion, led by Union of Democratic Forces for Unity (UFDR), and other groups like People’s Army for the Restoration of Democracy (APRD), Convention of Patriots for Justice and Peace (CPJP), and Movement of Central African Liberators for Justice (MLCJ). The civil population bore the major brunt of the conflict between the government and various rebels. Although several peace accords were signed between 2007 and 2012, the country remains unstable and in conflict.

Chad won its independence from French occupation in 1960, and since then it has experienced social tensions between the Muslim-dominated north and Christian majority in the south. Various groups have received assistance and support from Libya in the North and France, its former colonial ruler.

Civil war has been raging between various groups and the government in power. The conflict in Chad has also seen the conflict in neighboring countries like Darfur, CAR, and Sudan, spill over to its side.

The fight against authoritarian rule has been going on in various Arab-Muslim countries in the Middle East for several years but had been crushed by strong rulers whenever people raised their voice.

The Arab Spring rebellion was triggered when a 26-year old Tunisian man, Mohammed Bouazizi, immolated himself before the local municipal office in his town Sidi Bouzid. This set off a wave of protests that covered the country, leading to the overthrow of President Zine el-Abidine Ben Ali, who had ruled the country since 1987. Arab Spring rebellion soon spread to other countries in the Middle East and led to civil unrest in many countries and remains ongoing in some.

Visit the following to learn more about Warfare around the World: