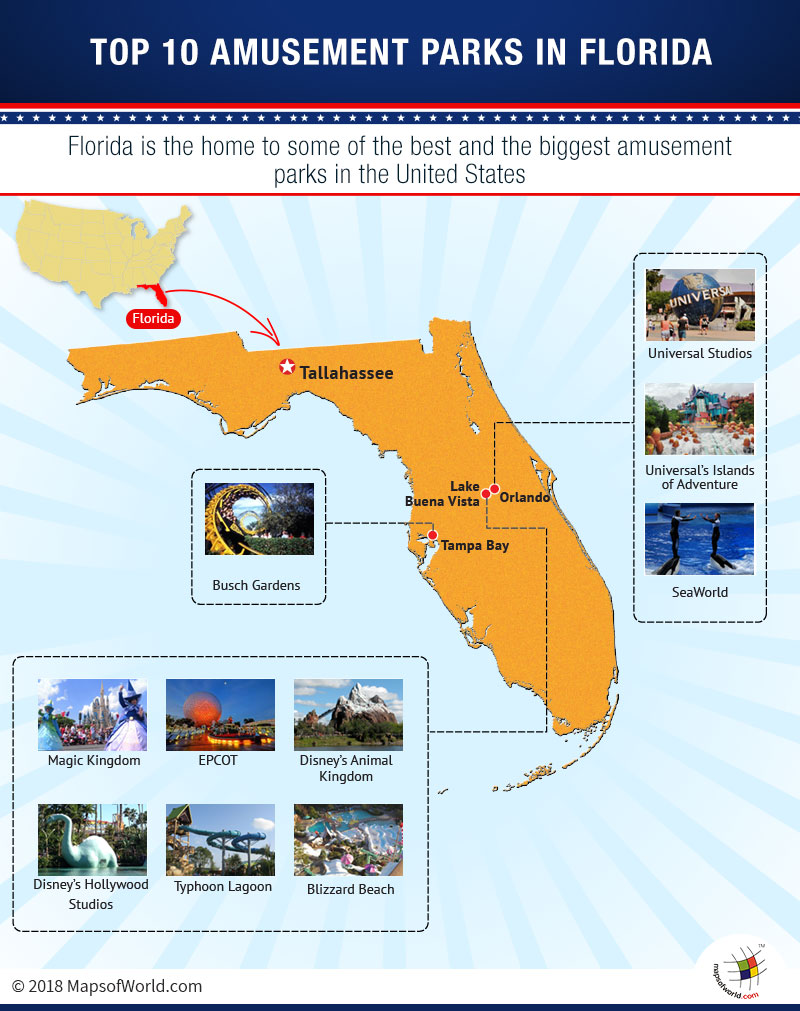 Florida is home to some of the best and the biggest amusement parks in the United States. Disney and Universal Orlando offer the most popular destinations in the state.

Walt Disney World Resorts is the world’s No.1 amusement destination comprising iconic properties that individually are complete destinations within themselves.

The Magic Kingdom is part of the Walt Disney World Resort and is the most visited amusement park in the world. It is magic, and a dream of every child to visit this dream kingdom. Those who make the trip, get to experience the best of Disney’s favorite characters and see them come alive, up close, and personal. 2018 has a lot of new attractions lined up: Be part of the Tomorrowland Expo and get to see The Incredibles, including Edna Mode for the first time. Meet up with Cinderella as she receives Elena to Princess Fairytale Hall in Fantasyland. Join Peter Pan as he flies to Neverland. Evenings come alive with fantasy parades and spectacular entertainment. The live shows remain a favorite with all in the family, especially Mickey Mouse’s Royal Friendship Faire, Kermit, and The Muppets, and the 3D musical with Mickey.

Epcot is the second most visited amusement property in Florida. This year will see Star-Lord and Gamora from “Guardians of the Galaxy” take you on a live musical journey through the cosmos. This summer get ready for a “Frozen” experience at the Norway Pavilion as kids will get to join the Summer Snow Day with Queen Elsa, Anna, Olaf, Kristoff, and all the other friends. Or, one can go Finding Nemo and be part of the undersea fun. Don’t miss the Jeweled Dragon Acrobats in the China Pavilion.

The Animal Kingdom is ready with several star attractions in 2018 starting with Up! A Great Bird Adventure where kids join Russel and the adorable Dug as they set off on a unique birding experience around the globe. There’s a party waiting with Donald Duck and his friends at DinoLand, and then one can visit Pandora – The World of Avatar for an out-of-world experience.

Hollywood Studios is where Disney’s Hollywood comes alive. Ever been in a stretch Rock-n-Roll Limo where one can hit 0-60 in 2.8 seconds – a dream ride through the air? Visited the Twilight Zone Tower of Terror, where the elevator is as eerie as the Tower itself? Remember, Return of the Jedi? One can join the Jedi Training to use force – the galactic way. You can also see through Hollywood’s Golden Age at the Chinese Theatre. Don’t miss the Green Army Men from Toy Story as you walk around the place.

Step into Universal Studios, one of two properties that make Universal Orlando Resort, and you have a dizzying choice of rides. Catch the Supercharged – Fast and Furious or ride the flying bile as one embarks on an E.T. adventure or go 3D with Despicable Me Minion Mayhem. If you want to travel to Islands of Adventure, the other Universal property, hop onto the Hogwarts Express. Kids have plenty more things to look forward to, like getting to dance and play with Barney- the adorable Dino.

Universal Orlando’s second property, the much sought-after Islands of Adventure is all geared for another delightful year of attractive amusements. Visit the famous Hogwarts School of Witchcraft and Wizardry and then get on the fantasy ride with Harry Potter to embark on the Forbidden Journey. After Harry Potter, step into the wild world of Dinosaurs to begin the thrilling Jurassic Park River Adventure. Want to climb 75 feet only to drop straight down for the splash of a lifetime? The blast off on Dudley Do-Right’s Ripsaw Falls’ for an absolute nail-biting experience. Islands of Adventure has the best of dining, live shows, parades, and 3D/4D experiences to keep everyone entertained through the day and evening.

SeaWorld is Orlando’s best water amusement park, and it offers visitors a great time with thrilling rides, splashes and close-up experiences with exotic animals. This year, visitors can look forward to getting on board a raft and setting off on a river of adventure and excitement called Infinity Falls. Get ready for a 40-foot drop into swirling white waters before winding up in Harmony Village. If this was good, wait to try Mako- the hypercoaster, the crazy ride with speed and thrill. But one can’t come away without going onto the good old 44-foot Sky Tower that has been around for ages.

Typhoon Lagoon is all about water, fun, rides, and dining.  Disney, as in all its amusement properties, lines up terrific wet ‘n’ wild water options for the family. Popular options include Bay Slides, Humunga Kowabunga, Crush ‘n’ Gusher, Castaway Creek, Gangplank Falls, Keelhaul Falls, Storm Slides, and many more. Between June end and the second week of August, don’t miss out on Disney H2O Glow Nights – the dazzling pool party.

Kids love Disney’s Blizzard Beach Water Park and love to head straight to the slushy slopes of Mount Gushmore. Other fun-filled rides include Chairlift, Melt-Away Bay, Runoff Rapids, Downhill Double Dipper, Snow Stormers, Toboggan Racers, among many others. Blizzard Beach is a great place to spend the day all wet.

Visit the following to learn more about Florida: