Which Country Has the Most Neighboring Countries? - Answers 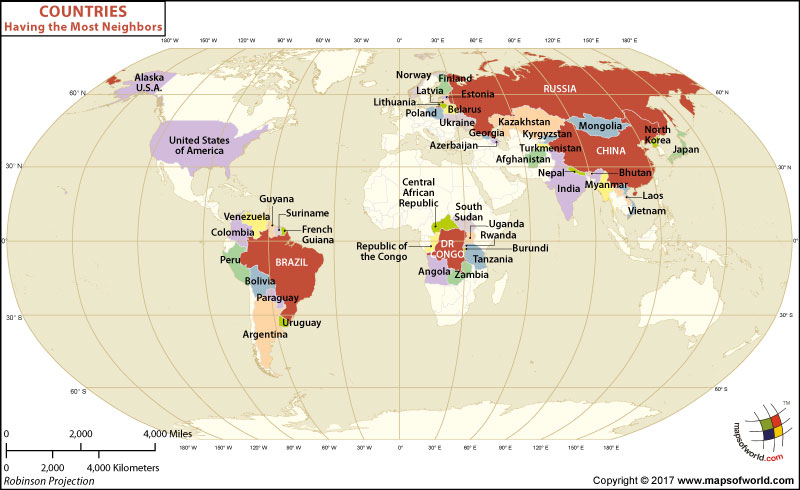 Both Russia and China have the most neighboring countries. The two nations share land boundaries with 14 countries each.

Spread over an area of about 3,705,410 square miles, the People’s Republic of China shares its borders with 14 sovereign nations. To the northeast are North Korea and Russia, Mongolia to the north, Afghanistan, Kazakhstan, Kyrgyzstan, and Tajikistan to the west, Pakistan, India, Nepal and Bhutan to the south-west, and Myanmar, Laos, and Vietnam to the south. Apart from these nations, China also shares maritime boundaries with four countries – Japan and South Korea (East China Sea), and the Philippines and Vietnam (South China Sea). Prior to 1997, Hong Kong had been a British territory and prior to 1999, Macau had been a Portuguese colony. Thus, China had shared borders with two other nations. Now, however, both Macau and Hong Kong are administered as Special Administrative Regions of China.

The Russian Federation is spread over an area of 6.59 million square miles. Like China it shares its land borders with 14 countries – to the west are Estonia, Latvia, Lithuania, Poland, Belarus, and Ukraine, to the south-west are Georgia and Azerbaijan, Kazakhstan, Mongolia, China and North Korea to the south and Norway and Finland to the north-west. Russia also shares maritime boundaries with two countries to the east – Japan and the United States of America.

Thus, if we include maritime neighbors, Russia has the most neighboring countries in the world.

After China and Russia is Brazil in South America that shares its borders with 10 other countries. These include – Argentina, Bolivia, Colombia, French Guiana (French territory), Guyana, Paraguay, Peru, Suriname, Uruguay, and Venezuela.