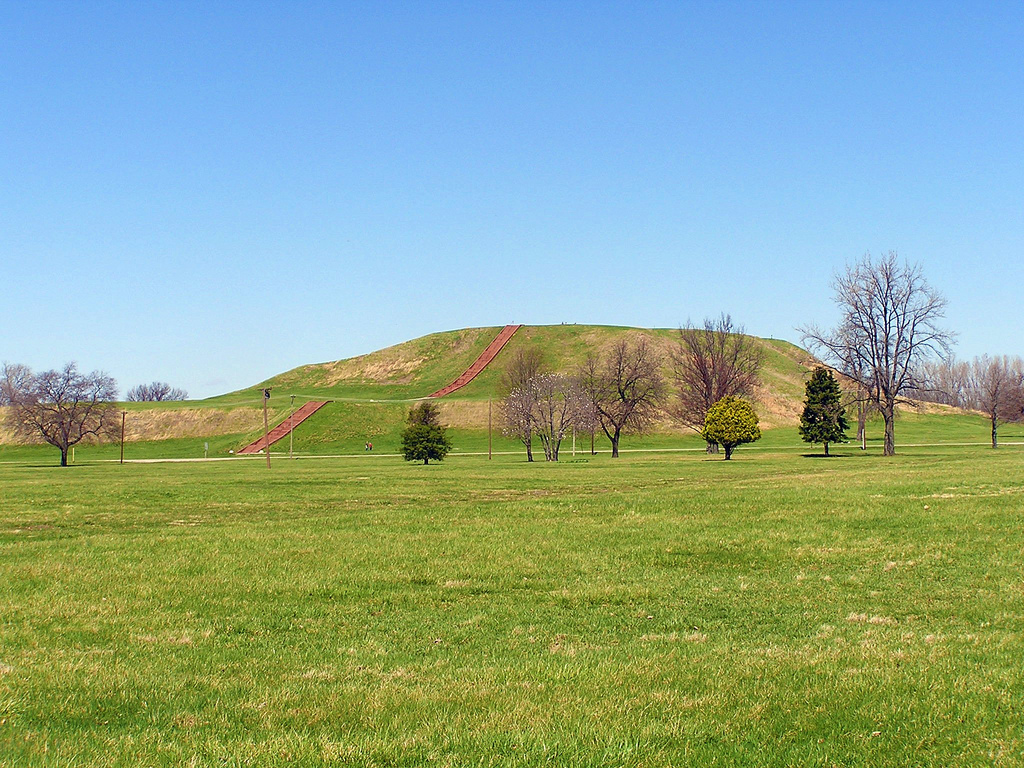 Monks Mound is the largest mound at the site and is over 108 feet tall with its base covering 16 acres. At the top of the mound is a wooden building that is thought to have been a temple or a home to the city’s ruler. There is some evidence that says human sacrifices were practiced there. There has been a stairway installed that leads to the top of the mound where visitors can enjoy a beautiful view of the whole site.

Mound of the Ruler-Priest, or Mound 72, is located on the south of Monks Mound. It is a ridge-top burial mound, where archaeologists had found the remains of a male, who was in his 40s, who was laid on a bed of 20,000 shell beads. To them, the man seemed to be an important ruler. The skeleton was accompanied by the skeletal remains of six other human sacrificial victims and closer to him were the bodies of 4 men with their hands and heads cut off, along with the bodies of 53 women.

There is a series of plazas that are located between the mounds. These plazas were used for processions, feasts, and public gatherings.

Among these plazas, the Grand Plaza is the biggest and covers approximately 50 acres. There is also a wooden palisade that was discovered at the site. It was used to protect the city as well as a circle of wooden poles, called Woodhenge, which were used as a solar calendar. The Cahokia Museum and Interpretive Center houses a number of exhibits about the site that will let you know more about the people who lived here.

The Cahokia Mounds are quite close to St. Louis, where a traveler can find plenty of options for accommodation. Drury Pear Tree Inn and the Huckleberry Finn Youth Hostel are excellent options for budget travelers, while the Hampton Inn & Suites St. Louis Forest Park and the Drury Inn Union Station are good locations for travelers with a mid-range budget. If you want to splurge, then the Beall Mansion and the Chase Park Plaza would keep you more than satisfied.

The Cahokia Mounds are located in Collinsville in the US, which is few minutes’ away from East St. Louis.

How to Reach Cahokia Mounds

The Lambert-St. Louis International Airport is about 35 km away from the Cahokia Mounds. It takes nearly 24 minutes to reach the mounds.

The nearest major train station is the Gateway Multimodal Transportation, which is about 17 km away from the mounds. The drive is of approximately 15 minutes.

Taxis are by far the best way to reach the Cahokia Mounds. However, it is important that visitors mention it to their driver that they want to go to the Cahokia Mounds, not the city of Cahokia, which is about 16 km away.

The Cahokia Mounds can be visited at any time of the year. However, the months of July and August are the wettest, while January and February are the coldest.

The Cahokia Mounds remain open for visitors from 8:00 in the morning till dusk.

The Cahokia Mounds remain closed on Public Holidays in the United States.

Entry to the Cahokia Mounds is free; however, visitors are encouraged to pay a donation fee. They suggest that adults pay $7, senior citizens pay $5, and children pay $2. Families, collectively, may choose to pay $15.

What should be worn at the Cahokia Mounds?

It is advisable that visitors wear comfortable clothing and shoes, along with hats. Sunscreen is essential and carrying a bottle of water and an insect repellent cream or spray will surely prove to be an aid.

What can be carried inside the site?

Visitors can carry cameras for taking pictures of the exhibits and sites for personal use. However, the flash is to be turned off while they are indoors. Pets, food, beverages, gum, weapons and writing utensils are not allowed inside the Interpretive Center.