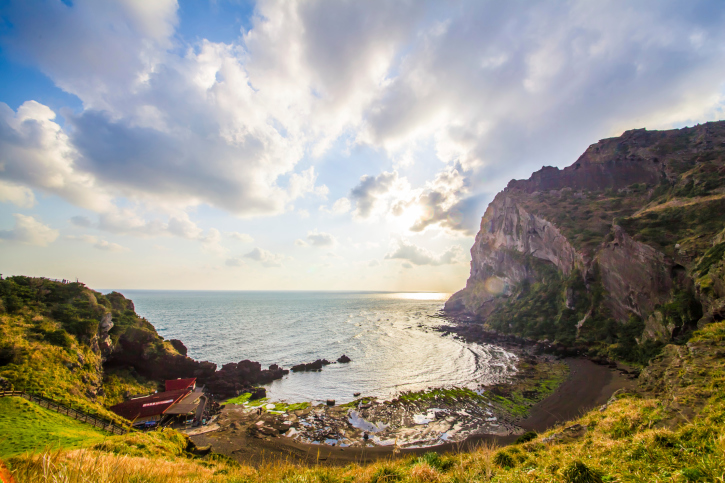 Jeju Island or Jeju-do is a popular vacation destination for both resident Koreans and visitors to the country. This volcanic island in the south-west of South Korea attracts tourists for its pristine beaches, stunning highland landscape, and distinctive culture. It has recently, in 2011, received the recognition for being one of the New Seven Wonders of Nature in the World.

Owing to the fact that Jeju-do was separated from the South Korean mainland, it has been able to preserve its own culture and characteristic dialect, which is quite distinct to the modern South Korea. It is famously known for three things – women (for their importance in society), rocks (for the uniquely carved black “grandfather stones” scattered throughout the island), and wind (for the constant ocean gusts all round the year). The island impresses its visitors with natural sites like beaches, rocky cliffs, volcanic mountains, caves, and waterfalls. In addition, Jeju-do has some extremely fascinating museums.

Situated almost at the center of the island, the Hallasan or Mount Halla is a famous hiking destination for adventure enthusiasts. It is shaped in the form of a shield, and has a long history of volcanic activity. Owing to its vertical ecosystem, comprising more than 1,800 plant species and about 4,000 animal species, Halla Mountain is a designated national park. It is also known by the name Mt. Yeongjusan. Its hiking courses include Yeongsil, Gwaneumsa, Seongpanak, Eoseungsaengak, and Eorimok. These trails are fairly easy and can be completed within a day.

The Geomunoreum Lava Tube System is a series of caves formed due to successive basaltic lava flows. This cave system runs about 13 km in the north to northeast direction. It is, in fact, considered as the largest of its kind in the world. The most significant aspect about this lava tube cave system is its preserved condition that lets the visitors appreciate its unique natural creation. The caves that you must see are Manjanggul, Yongcheongul, Gimnyeonggul, and Bengduigul caves.

Formed as a result of a volcanic upsurge below the sea more than 100,000 years ago, the Seongsan Ilchulbong Peak is a landmark of Jeju Island. It features a crater of 600 meters diameter on the top that is lined with sharp rocks. This makes the crater look like a crown from afar. Another interesting characteristic of Seongsan Ilchulbong is that while one side has rocky cliffs that seem to be emerging from the sea, the other side is green and slopes down towards a village. Visitors can take leisurely walks and enjoy horse riding in this verdant side of the mountain.

Things to do in Jeju

Oreums are the small volcanic mountains around the Hallasan that characteristically define Jeju Island’s landscape. They not only feature in the panoramic views, but also are part of the culture of the island. Out of the more than 365 Oreums in Jeju, the most remarkable ones are Darangshi, Saebyeol, and Yongnuni.

A Jeju Island tour without visiting a few museums is considered incomplete. While some give you a glimpse of Jeju-do’s culture, the others are simply fascinating and quite unique in the whole of Korea. For instance, on one hand there is Haenyeo Museum, which has exhibits showing the importance of women in Jeju’s society, on the other there is the Teddy Bear Museum that showcases teddy bears of numerous shapes and sizes, modeling famous paintings and costumes. Jeju Loveland is another interesting museum displaying human sexuality in cute and funny ways. Other museums worth visiting include the Jeju Folk Village Museum, O’Sulloc Museum, and Jeju National Museum.

Jeju Island has been blessed with numerous natural wonders, from gushing waterfalls to long stretches of unspoiled beaches to fascinating volcanic rock and cliff formations. These are also associated with many legends that make the visit more interesting and memorable. The famous waterfalls in Jeju-do include Cheonjiyeon, Jeongbang and Cheonjeyeon Falls. If you visit the island during its beach season, you must see Hamdeok, Jungmun, Hyeopjae, Emerald Bay, and Pyoseon. Among the rocky cliffs, Jusangjeolli Cliffs and Yongduam or Dragon Head Rock are notable.

Where is Jeju Island ?

The island of Jeju is located in the southwest of the peninsula of South Korea.

How to get to Jeju ?

It has an international airport in Jeju city that receives both domestic and international flights. Jeju is well connected by air with major Korean cities like Busan, Seoul, Incheon, and Cheongju. The maximum number of flights to the Jeju International Airport come from the Gimpo Domestic Airport in Seoul. Apart from this, Jeju also receives flights from Japan, China, and Taiwan. Airline operators plying Airbuses to Jeju are Jeju Air, Korean Air, and Asiana Airlines.

Another way to reach Jeju Island is by sea. Although slow, ferries to Jeju Port make for a scenic journey and is considered to be lower priced. There are daily ferry services available from the ports in Mokpo, Busan, Incheon and Wando. Journey time varies depending on the distance, and may take as little as 1 hour 40 minutes (from Wando) to as much as 12 hours (from Busan). Sea travel is although highly dependent on the sea conditions.

The climate of Jeju Island is temperate oceanic, owing to its subtropical location and proximity to the sea. During winter months, the warm currents – Kuroshio and Tsushima make the temperature of Jeju’s coastal areas warmer, as compared to its highlands. So, most regions of Jeju-do never experience snow during winters, except of course those at elevations. On the contrary, during summer, the cool oceanic currents bring the temperature to milder levels. This also brings rains.

The Jeju Island can be visited anytime of the year. It although does get the maximum number of tourists during the summer months, due to numerous opportunities for outdoor activities, like water sports, lounging on the beach, and hiking. Then again, during the season prices are higher. So, you can make your touring decisions taking this into consideration.

What are the coordinates of Jeju Island?

What are the famous attractions in the city of Jeju Island?