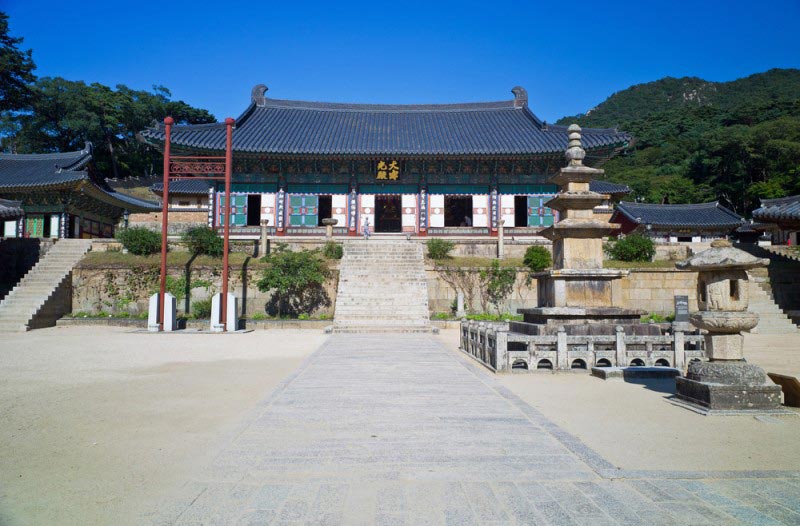 Haeinsa Temple is part of South Korea’s Three Jewel Temples – its largest Buddhist monasteries. The Haeinsa Temple is best known for holding the depository of the Tripitaka Koreana, a collection of Buddhist texts inscribed on 81,258 blocks of wood. Made in the 13th century, the Tripitaka Koreana is the oldest and most complete collection of Buddhist scriptures written in Chinese characters.

The temple is located in South Korea’s Gayasan Mountain National Park in South Gyeongsang. It is also home to the Janggyeongpanjeon and several more National Treasures including the Iljumun and the Daejeokgwangjeon.

The temple was founded during the reign of King Ae-Jang by two monks, Suneung and Ijung. The temple’s name is derived from a Buddhist expression meaning “truly enlightened world of Buddha and our naturally undefiled mind.” The temple serves as a education center of Buddhist studies in Korea, preserving historical tradition.

Visitors to the temple can arrange a temple stay, sleeping overnight in the temple, and participating in meals and religious ceremonies with the monks. Applications for temple stay can be submitted on the temple’s official website.

Where is Haeinsa Temple?

Haeinsa Temple is situated in the mountains of Hapcheon County in southeast Korea. The nearest city is Daegu, which is accessible via train or bus, about 2 hours from Seoul. From there, the park is easily accessible by car – about an hour and a half bus ride or car ride from Daegu. The temple complex is a 30 minute walk from the bus stop along a meditation path.

The Haeinsa Temple is a good place to visit during any season to enjoy the various sceneries of each. The temple is open for longer hours during the summer. Winters are cold and snowy, but also very beautiful in the mountains. Temple stays only take place on weekends.