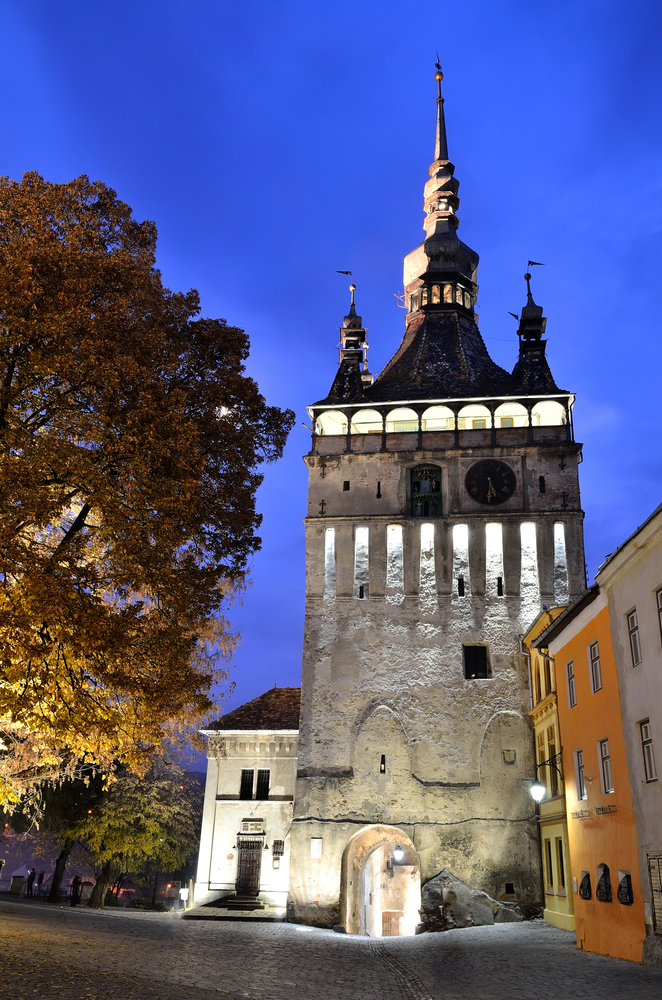 Sighisoara is a fortified medieval town in Romania, built at the crossroads of Central and Eastern Europe at the edges of Latin culture and Byzantine-Orthodox culture. Hungarian rulers invited German craftsmen to help establish this city and secure the borders. After the Mongol invasion in 1241, the city was reinforced with defensive walls and guard towers. Later in around 1421 to 1526, these walls were heightened due to threats of invasion from the Turks.

The people that colonized Sighişoara, who became known as the Saxons of Transylvania, were skilled in various trades, and grouped by their guilds. Each guild was tasked with building a tower and devising its defense strategy. As a result, notable buildings in the Historic Centre of Sighişoara include the Ropemakers’ Tower, the Butcher’s Tower, the Coopers’ Tower, and the Locksmith’s Tower. The town’s economy as well as the town itself developed due to the community of craftsmen.

Though the culture is dying out after 850 years, the city center remains as a preservation of the Saxons of Transylvania culture. The historical city center features bright and colorful architecture, sprawled across City Hill and Lower Town, making up this medieval town. Visitors interested in architecture can observe the various phases of construction from the 12th to the 16th centuries, especially in a row of houses between Citadel Lane and Hermann Oberth Square. Made from stone or brick, and colored roughcast (plaster), the houses are similar to one another in construction and layout. The clock tower, where city council assembled until 1556, now houses a museum. The Church of St. Nicholas offers an example of Gothic architecture in Transylvania, with influences from Central Europe in its decorative facade. The craftsmen guilds began to leave around 1840, but the historic center is still relatively well preserved.

The city of Sighişoara is perhaps best known as the hometown of Vlad II, or Vlad the Impaler – the historical figure who became inspired the character and story of Dracula. His alleged birthplace is located within the citadel.

Where is Sighisoara - Historic Centre of Sighişoara?

Sighişoara is situated in Mureş County in Transylvania, which is a region of Romania. Romania is a country in southeastern Europe, along the Black Sea. The Historic Centre of Sighişoara is situated on a hill above the Tarnava Mare River. Trains are available from nearby major cities, including Bucharest, Brasov, and even Vienna and Budapest. The city itself is walkable.

Though the temperatures are fairly high at the end of July, it might be the best time to visit Sighișoara, because this is when the city hosts its annual Medieval Festival. During the Medieval Festival, people dress in medieval fashions and attend concerts and dance competitions, and view a variety of cultural exhibitions like crafts. Winter in Transylvania is another popular time to visit to enjoy the snow and winter sports in the mountains.