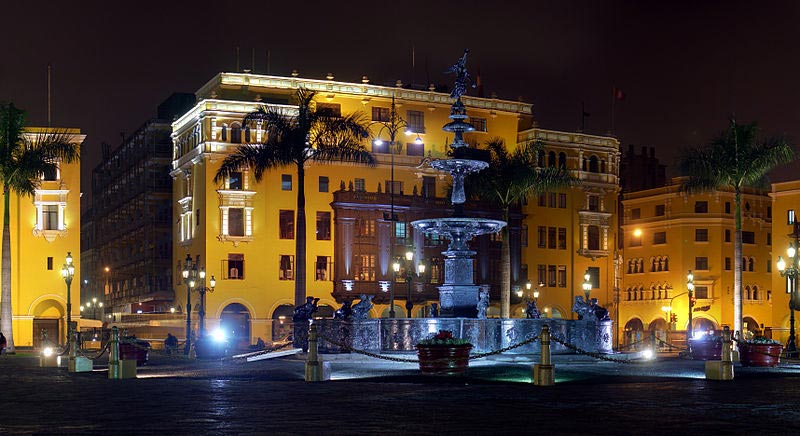 A Still from Plaza Mayor in Lima, Peru

The Spanish colonial town of Lima, Peru was founded on January 5, 1535 by Francisco Pizarro, a Spanish conquistador. Over its history, Lima became an important city in terms of politics, economics, culture, flourishing in the 17th century. Today, the city displays its historical roots of its native cultures combined with its Spanish colonial history, while modernization has changed the city’s landscape. The presence of several religious orders has also left its mark on the city. The historic sites that remain are contained within the area known as the Historic Centre of Lima, designated a UNESCO World Heritage site for its architectural interest from the Spanish Kingdom of Peru.

The basilica and convent of San Francisco is an example of the Spanish Baroque architecture in Latin America. Founded by the Emperor Charles V along with Francisco Pizarro, the complex includes three churches, San Francisco, La Soledad, and El Milagro (the Miracle), five cloisters, a library, and catacombs. Special features of the convent and its churches include the décor on the interiors, with painted Moorish and Spanish designs, frescoes inlaid Spanish tiles, and woodwork.

Torre Tagle Palace is another place of architectural significance, designed in indigenous styles, the mansion is now the headquarters for the Ministry of Foreign Affairs.

Several plazas, including Plaza Mayor (or Plaza de Armas), Plaza San Martin, and Plaza Dos de Mayo are important centers, surrounded by historical buildings. Plaza de Armas is home to a cathedral and the Archbishop’s Palace, and is considered a symbol of Lima.

Where is Historic Centre of Lima?

Peru’s Historic Centre of Lima is located mostly in the districts known as Cercado de Lima and Rimac, which are separated by the Rimac River. Jorge Chavez International Airport serves the city, with domestic and international flights. As the country capital, Lima is a large, busy city, with intense driving situations, so taxis and public transportation are the recommended modes of travel.

When to Visit Historic Centre of Lima

Lima’s location in a valley near the coast and a desert gives it a fairly mild climate with beautiful weather during the summer months, making summer the best time to visit. Seasons in Peru are reversed from those in northern countries, so Lima can be a warm getaway during northern winter. Winter In Peru is somewhat cold and quite rainy.

Nearby Attractions of Historic Centre of Lima