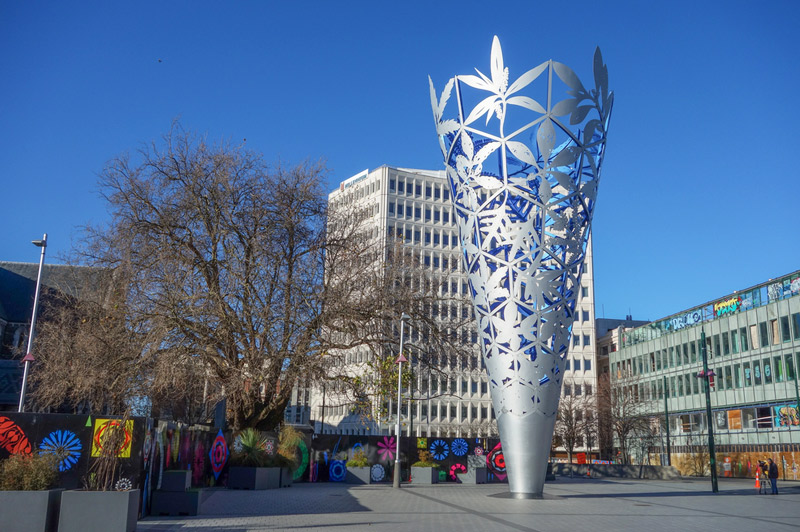 With strong Gothic Revival architecture and prevailing Māori culture, Christchurch is unrivaled. Snuggled between the Canterbury Plains and the Pacific, ‘The Garden City’ is interwoven by rivers, parks, and hills. Once rocked to its very foundations by earthquakes, Christchurch has healed its structural wounds with resilience. Whether it is punting on the Avon River or riding a gondola to the Castle Rock Reserve, there aren’t many places in the world offering such thrilling escapades.

International Antarctic Centre – Get a unique experience of Antarctica in the Snow Storm room, learn the stories of the Antarctic Explorers, get close to Little Blue Penguins, or watch an audiovisual display in the 4D theater. The visitor center, popularly called ‘The Antarctic Attraction,’ comprises exclusive Antarctic exhibits, a cafeteria, and a bar. A Hagglund Ride, operating from the center, takes visitors across the major attractions.

Christchurch Botanic Gardens – Located adjacent to the loop of the Avon River near Hagley Park and sprawling over an area of 50 acres, these gardens have a large collection of exotic and endemic plants. The Herb Garden, Central Rose Garden, Heritage Rose Garden, Water Garden, and Rock Garden are the highlights here.

Orana Wildlife Park – Situated in the outskirts, this open-range zoo provides an ultimate wildlife experience. You can hand-feed a giraffe, look in the eyes of gorillas and white rhinos, get surrounded by the pack of lions, stand face to face with a Sumatran tiger, and meet the national symbol – Kiwi Bird. The park also offers barbeque and picnic spots to while away the time with your loved ones.

Canterbury Museum – Inaugurated in 1870, this museum features over 2.1 million objects related to Antarctic expeditions, Māori artifacts, Canterbury settlement, and natural history. Quake City is an interactive exhibition created by this museum that reflects the loss and recovery after the devastating earthquakes. Christchurch i-SITE Visitor Information Centre is located just across the street from the museum.

Things to Do in Christchurch

Within two hours drive from downtown Christchurch, you can launch yourself into an array of outdoor adventure activities. Whether you ride the gondola up the Port Hills for breathtaking 360 degree views of the city and the Banks Peninsula; or take boat cruises to explore the glacier in the Tasman Lake of Mount Cook National Park, the fun never ends.

Beaches – Just around the outskirts of the city, from hidden bays to dramatic coastline there are about 40 appealing beaches – that are never crowded. While the long pier of South Brighton Beach is ideal for family picnics, the stunning coastline of Taylor’s Mistake Beach is considered a premier surfing spot in the region. For sunbathing, swimming, scuba diving, and coastal walking tours; Pines Beach, Leithfield Beach, Corsair Bay, Sumner Beach, and Ashworth’s Beach are easily accessible and offer excellent amenities.

Heritage Tours – The South Canterbury region delivers the perfect balance of historical and cultural experiences. Near the confluence of the Opihi and Opuha Rivers, the area has the largest collection of Maori Rock Art in the country. In Timaru, you can encounter splendid examples of preserved urban Victorian and Edwardian architecture. Admire the unspoilt alpine scenery of Mount Potts, which was the home of Edoras in the Lord of the Rings trilogy.

TranzAlpine – This daily passenger train, which takes you on one of the world’s most scenic routes, passes through spectacular Waimakariri Gorge, fertile Canterbury Plains, lush forests of the Arthur’s Pass, and many tunnels and viaducts. It departs from Christchurch at 08:15 AM and reaches Greymouth at 12:45 PM. It stops for an hour there before returning to Christchurch at 18:05 PM.

Shopping – With places like The Palms Shopping Centre, City Mall, Re:Start, and Riccarton Mall, the city has a bustling retail scene and a trendy vibe of designer shops and boutiques. The tranquil reserve of Riccarton House and Bush – only 3.5 km from downtown – hosts farmer’s markets and artisan producers on Sundays. It features local arts and souvenirs, food stalls, fresh produce, and delicious Hummingbird Coffee.

Where is Christchurch City ?

Be it the powdery snow of winter or the blossoms of spring, Christchurch is a year-round destination. June to August and November to March are ideal to make the most out of outdoor activities.

For luxurious stay, you can choose from The George, Chateau on the Park, Eliza’s Manor Boutique Hotel, and Otahuna Lodge. For mid-range accommodations, Argyle On The Park, Gothic Heights Motel, and Central Park Motor Lodge are good options. Dorset House Backpackers Hostel, Celtic Backpackers, and Chester Street Backpackers are some of the value-for-money accommodations.

Christchurch relishes a diverse cuisine prepared from fresh produce. To complement your meal, taste a glass of Chardonnay or Sauvignon Blanc grown and made in New Zealand. Strawberry Fare, The Old Vicarage, King of Snake, Gustav’s, and Nobanno are some of the best eateries to experience fine dining.

By Air – Christchurch International Airport (CHC), around 7 miles northwest of city center, is the gateway to New Zealand’s South Island. It is efficiently served by international airlines to and from Australia, Singapore, China, Japan, and the United Arab Emirates.

By Train – Christchurch Railway Station is the terminus of the South Island’s two long-distance passenger trains – the TranzAlpine and the Coastal Pacific. Moreover, The Christchurch tramway system, which runs in a loop, is limited within the central neighborhood.

By Road – The city has an extensive bus network connecting nearby suburbs and satellite towns. Daily bus services operate to Dunedin on the State Highway 1 – which passes along the western coast. Although five color-coded bus routes link the major attractions, car is the preferable medium to travel in the city.