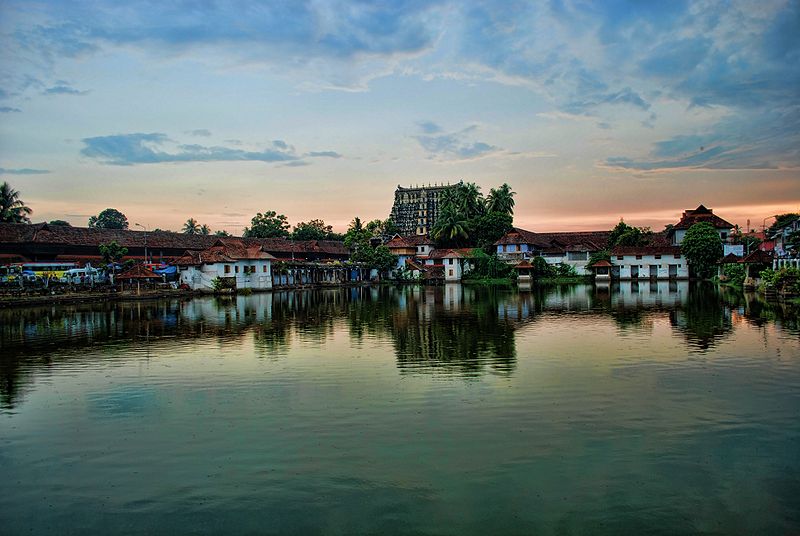 Padmanabhaswamy Temple is one of the Oldest in Thiruvanthapuram

The Padmanbhaswamy Temple has recently become the media’s favorite with news of hidden treasure that was recovered from its basement. The new-found riches are not its only claim to fame. The temple is one of the oldest in Thiruvanthapuram, the capital of Kerala, and has been drawing a large number of visitors with its beautiful granite architecture and enthralling mythological history.

Inside the temple, is the idol of Lord Vishnu(one of the most revered Hindu deities), lies reclined on a seven headed-serpent-an awe-inspiring sight.

Both the Dravidian and Kerala architectural styles have been finely integrated into this huge temple. In fact, the sanctum sanctorum, the Dhwaja Sthambam (flag post), and the Chuttambalam (the temple walls which we circumambulate) are made in the Kerala style. The walls of the sanctum of Sree Krishna shrine have inscriptions in the Tamil script. The stucco-style architecture in the Gopuram (a large pyramidal tower that over the temple entrance gate) reminds one of the Vijaynagar style, while traces of architecture from the Madurai Nayak dynasty (a dynasty that ruled the state long ago). The sprawling temple complex, built on a seven-acre plot, does justice to the fusion of so many architectural styles. Fort walls encircle the temple complex.

The Vishnu Idol and other idols in the temple: There are ten deities in the temple, the most important of them being the idol of Sree Padmanabhaswamy. Lord Padmanabhaswamy is seen reclining on Sheshanag, while Lord Brahma (the creator) emerges from his navel on the stem of a lotus, and the Shiva Ling (representing Shiva, the destroyer) is below the right arm of Vishnu.

The idol is composed of 12008 ‘salagrams’ brought all the way from the banks of the river Gandhaki, on the backs of elephants. The ‘salagram’ is a blackish Ammonoid fossil found in the banks of the Gandhaki that is considered an iconic representation of the Lord Vishnu himself.

The temple is located inside East Fort in Thiruvanthapuram, the capital of Kerala.

The closest international airport is the Trivandrum International Airport. From there, it is a ten-minute drive via the NH 47 Bypass Road to the Padmanabhaswamy Temple.

The closest railway station is the Thiruvanthapuram Central Railway Station. From there, via the NH47, it is 1.11 miles to the temple. A cab will take around 23 minutes to cover the distance.

Timings: There are time slots for ‘Darshan’, i.e., seeing the deity and offering prayers.

Timings on regular days are as follows:

Prayers can be offered at the temple. The Hindu form of worship (called Pooja) generally involves offerings of fruits, flowers, incense sticks and money. The priest undertakes to perform the worship in the name of the person offering the worship and even his father and forefathers. At most popular Hindu temples, there are unbelievable exorbitant charges for such Poojas. The famous Padmanabhaswamy Temple is no exception. Rates for Poojas start from INR 2000 and go up to INR 10,000.

Tips for someone visiting the temple: