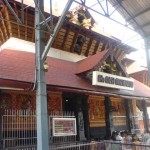 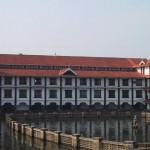 The Guruvayur Temple, also known as Guruvayur Sree Krishna Temple, is a Hindu temple that is dedicated to Lord Krishna, who was an avatar of Lord Vishnu. The temple is located in the town of Guruvayur in Kerala, India. It is one of the most important temples for Hindus in the state.

The presiding deity in the garbhagriha (sanctum sanctorum) is Mahavishnu, who is worshipped in the form of Lord Krishna. The central idol is a four-armed standing Krishna carrying Panchajanya, a dextral conch; Sudarshana Chakra, a discus; Kaumodaki, a mace; and a lotus. The Moola Vigraha (main idol) is made from ‘Pathalanjana Sila’, rare black granite, which is considered to be extremely sacred. Two more idols – one in gold and the other in silver – are also present there. The silver idol is older and thus taken out only for Arattu festival and on a few special occasions.

The Guruvayur Temple is a good example of Kerala’s temple Vastu Vidya, which is an ancient treatise on architecture. The temple, facing east, has two ornate gopurams (monumental towers) at the eastern and western entrances ­– Kizhakke Nada and Padinjare Nada – that house some of the rare frescos of the 16th century.  At the center of the Anapanthal (area between the monumental towers), there is the Nalambalam (pillared hall) with a sub-shrine of Sasta or Lord Ayyappan.

On the northeast of the shrine, there is the Koothambalam (stage or theatre) specifically designed for Kutiyattam and Chakyar Koothu performances. The ceiling and the pillars of the Koothambalam are elaborately painted, profusely engraved, and lavishly adorned with filigrees. In front of the temple, there is a brass 24-foot Deepasthambam (pillar of lamp) with 13 receptacles for cotton wicks. There was also a Deepasthambam on the north, but that was smashed by Gajaraja Kesavan, a famous elephant that was gifted to the temple by the royal family of Nilambur in 1916. There is also a Dwajasthambam (flagstaff) plated in gold with a height of 600 feet where a flag is hoisted to mark the beginning of the Annual Utsavam (festival) till the Arattu day.

Sreekovil is the sanctum sanctorum. There are traditional mural paintings on all the three sides of Sreekovil depicting sequences from Puranic tales and Krishnaleela. The inner most room of the Sreekovil has the idol of Lord Krishna. All the articles in this room, including the two doors and the roof, are either made of gold or covered with gold. The old doors of the Sreekovil were replaced with new ones that are secured with gold plated bars and decorated with 101 bells that are made of silver and plated with gold. Sopanam, the steps leading to the Sreekovil, are intricately carved, showcasing brilliant craftsmanship.

According to legends, the idol at the temple is more than 5,000 years old. However, there are no historical records to confirm this. The earliest temple records are from the 17th century and the temple is said to have been built in 1638 A.D. Between 1859 and 1892, major renovations were carried out in the temple such as installation of copper sheeting on the roof. In 1970, a massive fire broke out in the temple. Thankfully, the important sections of the temple were unharmed. The temple was reopened in 1973.

While there are a number of hotels near the Guruvayur Temple, most devotees and pilgrims choose to use the accommodations offered by the temple. There are three separate guest houses ­– Kousthubham, Panchajanyam, and Sreevalsam. The cost of the accommodation in these guest houses varies depending upon the location, the amenities, and the number of people using the room.

Guest House Address: East Nada, Guruvayur, Kerala 680101. All 3 guesthouses are adjacent to each other.

Where is Guruvayur Temple?

The Guruvayur Temple is located at Guruvayur Devaswom, Guruvayur, Kerala 680101.

Cochin International Airport is about 80 km away from the temple. A drive will take less than two hours.

Located toward the east of the temple, Guruvayur Railway Station is just 1 km away from the temple.

The closest major railway station is Kuttipuram Railway Station, which is about an hour away from the temple.

There are a number of buses that connect the Guruvayur Temple with all the important cities in Kerala as well as to the neighboring states of Karnataka and Tamil Nadu. The Kerala State Road Transport Corporation (KSRTC) bus station is located quite close to the temple.

The temple usually opens at 3:00 a.m. and closes at 10:00 p.m. Generally, there are about five pujas (worship) and three circumambulatory processions carried out. The temple is closed between 1:30 p.m. and 4:30 p.m.

The offerings at the Guruvayur Temple begin from as low as Re. 1 and go all the way up to Rs. 35,000. For certain things, such as the maintenance of elephants, devotees are free to offer any amount they want.

The cost of the ticket to the elephant sanctuary for adults is Rs. 10 and for children is Rs. 5. Extra charges are applicable for the use of cameras.