Gulmarg in Jammu and Kashmir

Gulmarg in Jammu and Kashmir PDF 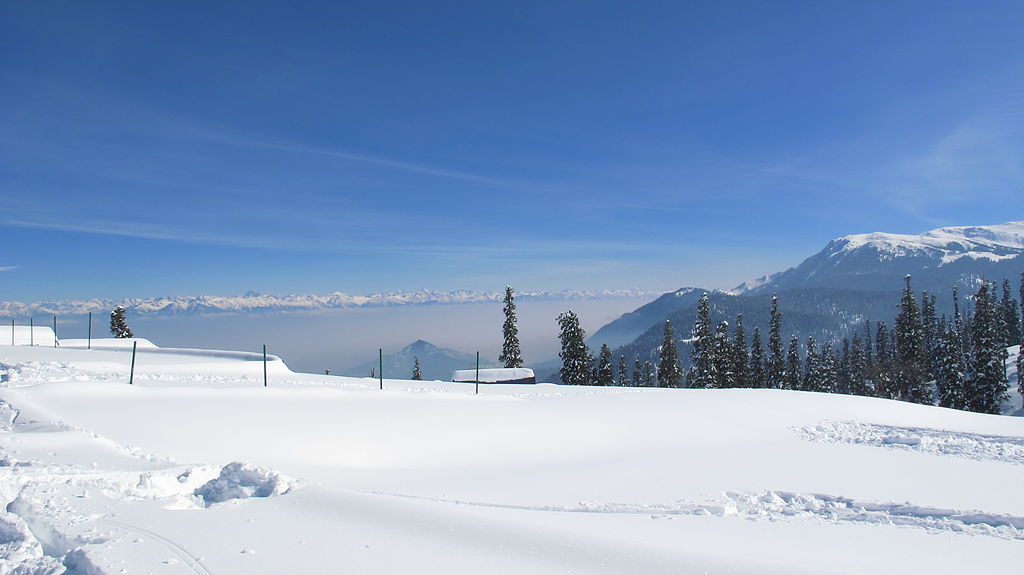 Gulmarg is a popular skiing destination in India

Gulmarg is an enchanting destination that enthralls the visitors all through the year. If the white-top mountains and the sight of of enthusiastic skiers going down the slope lure you to adventure, the gorgeous meadows, colorful daisies, and lush green landscape in the summer evoke a sense of serenity. Located in the northernmost state of Jammu & Kashmir, Gulmarg is a beautiful mountain resort that is not only the “heartland of winter sports in India” but also a preferred hub for trekking, golfing, fishing, mountain biking, and horse riding.

The native shepherds had originally named it Gaurimarg, after the Hindu goddess Parvati. Sultan Yousuf Shah, a 16th-century ruler, gave this destination its present name, which means “meadow of flowers.” It was the favorite destination of the Mughal Emperor Jahangir who once took away 21 wild species of flowers from its gardens. Gulmarg became the retreat for the British Civil Servants who would take shelter here to get respite from the heat of the North Indian summers during the 19th Century.

Things to do in Gulmarg

Skiing on the slopes of snow covered hills of Gulmarg is a favorite activity among the visitors. It is a globally renowned ski destination and was ranked the fourth best ski destination in Asia by CNN International in 2011.

The Gulmarg golf course is the highest green golf course in the world situated at a height of close to 2,730 meters from sea level. It is also the longest and one of the biggest golf courses in India having a length of 7,505 meters.

A ride on a gondola is a must for tourists visiting the town. It offers a panoramic view of Gulmarg, Kongdori, and Apharwat. The ride is divided into two phases: the first goes from Gulmarg to Kongdori and the second continues from Kongdori to Apharwat. There is also a chair-lift facility that takes tourists from Kongdori to Mary’s Shoulder.

St. Mary’s Church: This quaint little Roman Catholic church was built nearly hundred years ago and is very popular amongst tourists for its Victorian architecture. It resembles a small countryside chapel. Built with gray stones and covered with a green tiled roof, the church looks.

Golf Course: The clubhouse at the Gulmarg Golf Club is a historically significant building as it was established in the early days of the British rule by Sir Neville Chamberlain. The golf course is open for professionals as well as amateurs. The Golf Club is also available for hire so that tourists can enjoy the game if they want to.

Khilanmarg: The valley is located a few kilometers away from the town and is famous for its meadows covered with flowers during spring and excellent ski runs during winter. It also offers a great view of the peaks surrounding the region. On a clear day, it is possible to see Nanga Parbat from here.

Alpather Lake: This beautiful lake is located at the foot of the Apharwat peak. It is usually frozen all the way till June, and even after that it isn’t uncommon to find ice in the lake. Trek towards the lake is quite rugged, however, it is quite popular among those who like a bit of adventure. A more relaxed way to reach the lake is by hiring a pony.

Shrine of Baba Reshi: This is almost a 500-year-old tomb of Baba Reshi, a revered Muslim saint. It is located 7,000 feet above sea level.

Ferozepur Nallah: It is a mountain stream that flows through the valley and finally meets the Bahan River. It is a popular picnicking destination for tourists and locals during the summer as the place comes alive with beautiful meadows.

Srinagar: It is the nearest city to Gulmarg located at a distance of around 51 km. Srinagar is home to a number of popular destinations including the Dal Lake.

Pahalgam: Pahalgam is another famous tourist spot near Gulmarg. It is about 140 km from Gulmarg. The Valley of Shepherds, Tulian Lake, Mattan & Martand, and Overa Wildlife Sanctuary are some of the prime attractions in Pahalgam.

Sonamarg: Sonamarg (the ‘Meadows of Gold’) is another major tourist attraction near Gulmarg. A journey of 125 km is worth undertaking as you come across the Thajiwas Glacier, Gadsar Lake, and Walnut Orchards.

Gulmarg is located about 57 km away from Srinagar in the Baramulla district of Jammu and Kashmir.

By Air: The Srinagar International Airport is the closest airport to Gulmarg and is about 58 km away from the town. Driving from the airport to Srinagar takes about an hour and a half.

By Rail: The nearest major railway station that connects Gulmarg to other important cities in India is Jammu Tawi. The station is about 347 km away and driving from there to Gulmarg takes over nine hours.

By Road: The Jammu & Kashmir State Road Transportation buses ply between Gulmarg and Srinagar. From Srinagar, one can board buses that connect major towns and cities of the region.

Accommodation in Gulmarg is usually quite expensive. Gulmarg Resorts and Apple Tree Resorts are mid-range accommodations, while the Khyber Himalayan Resort & Spa and the Hotel Highland Park are good enough for travelers who are seeking a luxurious place to stay. Budget travelers may have better luck looking for accommodation in the nearby city of Srinagar.

The Highland Park Restaurant, Pine Palace Restaurant, Hillpoint, Global Restaurant, and Bakshi’s Green Punjabi Dhaba are some of the best places to eat in Gulmarg.

The best time to visit Gulmarg is between May and September. Skiers should visit the place between November and February to make the most of the snowfall.