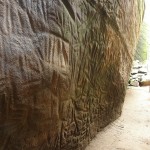 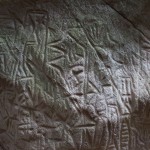 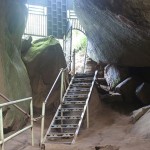 The Edakkal Caves are a pair of natural caves that are located near Edakkal, which is situated in the Wayanad district of Kerala, India. The caves are located about 1,200 m above sea level in the Ambukuthi Mala Mountain in the Western Ghats. Inside the caves, there are petroglyphs that date back to 6,000 BC. The Edakkal Caves are extremely significant as they are the only known examples of Stone Age carving in South India.

The history of the Edakkal Caves is quite interesting. The caves were discovered in the 1890s by the Superintendent of Police of the Malabar district, Fred Fawcett. He was on a hunting trip in the area when he came across a stone axe from the Neolithic Age in a coffee estate. After making a few enquiries, he headed toward the mountains in the Wayanad district and came across the caves.

Providing knowledge about who our ancestors were and how they lived is what makes the trip to the Edakkal Caves worthwhile. The Edakkal Caves’ biggest attraction is definitely the pictorial writings. The walls of the caves are lined with ancient stone scripts, geometric shapes as well as human and animal figures. There are ancient Tamil-Brahmi inscriptions in the caves. The cave is divided into two sections – the lower chamber and the upper chamber. The lower chamber is smaller and is 18 feet long, 12 feet wide, and 10 feet high. The upper chamber is considerably bigger as it measures 96 feet in length, 22 feet in width, and 18 feet in height. The historical and anthropological significance of the site has made it very popular amongst students, historians, as well as people interested in history.

Trekking to the cave is also a major attraction in its own right. Since the cave is located near the top of the Ambukuthi Mala Mountain, it offers spectacular panoramic views of the surrounding areas.

Where is Edakkal Caves

By Air: The nearest international airport to the Edakkal Caves is the Calicut International Airport, which is about 110 km away from the caves.

By Rail: The nearest railway station is in Kozhikode, which is about 100 km away from the caves.

By Road: There are jeeps that take visitors near the caves. The visitors need to walk the remaining distance.

The best time to visit the Edakkal Caves is from December to May.