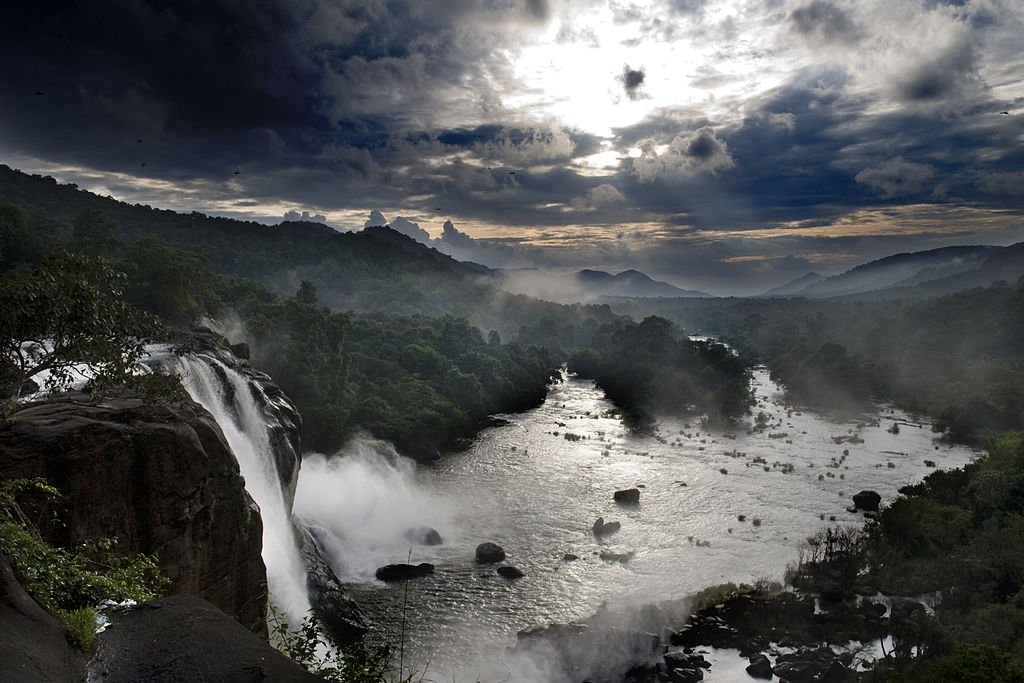 Athirapally Falls is better known as the Niagara of India

The Athirapally Falls in the southern state of Kerala in India is called the Niagara of India, even though its 80 foot vertical drop is half of that of Niagara.. Another waterfall, the Vazhachal is located just 5 kilometers away, and the two waterfalls together command a huge footfall of visitors, making this area one of the most touristy spots in all of Kerala.

Situated at the entrance of the Sholayar ranges, the Athirapally Falls joins the Chalukudy river after plummeting 80 feet. The water begins with a smooth, noiseless nosedive, and then crashes downwards over gorges and protruding trees.

It is a 2 kilometer trek to the mouth of the Falls. Though arduous, the walk is a revelation in itself. As the altitude increases, voices of people and motor vehicles are left behind. Chirruping of birds fills the air. During monsoon, the trek can be tricky as the road becomes slippery. However, little croaking frogs hopping all over the road just after a fresh bout of rains, delight the traveler.

Lush with natural vegetation, the area surrounding the waterfalls is a real treat for the eyes during monsoons. The Chalakudy river flows with all its might, as the environment comes to life with the fresh rains. The volume of water of the Athirapally Falls too increases dramatically during the monsoons. Chalakudy River, Charpa, Vazhachal and Athirapally are favorite spots for monsoon lovers. A welcome sight during monsoon are the fishermen who patiently cast their nets and wait, in hopes of a good catch. The area also sees a lot of picnickers. Several tours to nearby places are possible from Athirapally Falls. You can tour nearby hill stations, take a houseboat tour, or make a tour of the Western Ghats.

A 163 MW hydroelectric project had been proposed to be set up in this region. However, keeping in mind the adverse effect it would have on the natural environment, human habitation in the area and tourism, which is a major industry in Kerala, the project was shelved.

The Athirappally Falls is a popular locale for filming Tamil, Telugu, Malayali and Hindi movies.

Where is Athirapally Falls?

The Falls is located on the Chalakudy River near the Vazhachal Forest Division.

What are the attractions near Athirapally Falls?