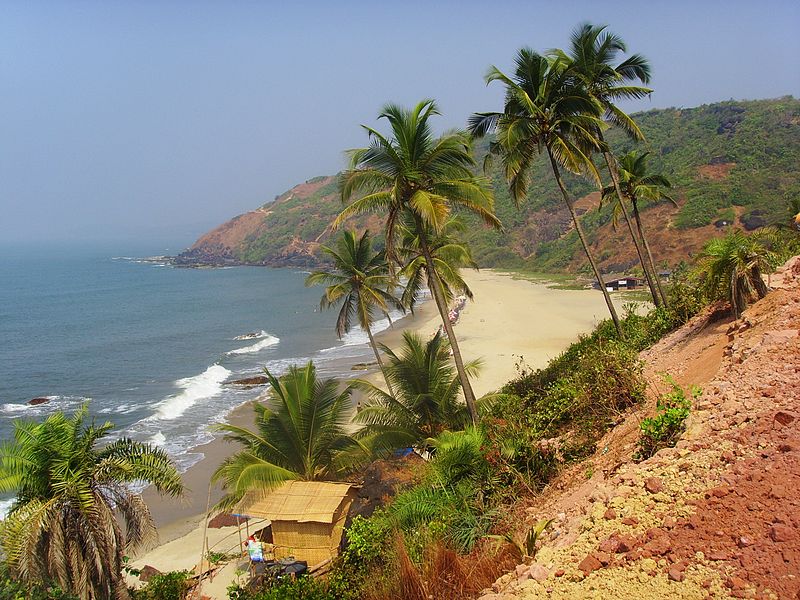 One of North Goa’s most popular attractions, Arambol Beach is known for its rocky beaches and otherworldly bohemian set-up. Home to hippies and regular travelers alike, Arambol Beach attracts many national and international tourists every year.

While the main beach is filled with delightful party spots that come to life every night, the real serene scenery takes the leisurely stroller to a secluded lagoon. This sweetwater lake at Arambol Beach is famous for having a mixture of sea and fresh water.

With the help of a map, explorers can also take off to the valley of the lake, hidden between two low hills. An ancient Banyan tree marks a spectacular stone sculpture which sees many international visitors. This stone sculpture was created by Jacek Tylicki, an American Conceptual and Land Artist and is famously called, the Money Stone. The words, ‘Give if you can-Take if you have to’ are inscribed on the stone.

Unlike other beaches in Goa, beach huts do not spoil the beauty of the beach. After years of persistent resistance, the locals have ensured no major hotels are constructed on the beach. Guest stays, homestays and temporary shacks adorn the length of the beach and are dismantled by the end of the tourist season. However, pretty beach resorts overlooking the deep blue ocean are found within 50 meters of the beach.

Several yoga retreats can be found here. Healing arts and meditation, along with live music and dance, form the lively charm of these retreats.

Explore:  The best beaches in Goa

Where is Arambol Beach?

Bordered by Maharashtra on one side, the Arambol Beach lies in the Pernem administrative region and is an hour’s drive from the Dabolim international airport. It is the northernmost beach of Goa, and is bordered by the Mandrem Beach on the south and the Keri Beach on the north.

Public transport is easily available on the way to Arambol. Buses from Mapusa travel to the main Arambol stop for Rs.12. The easiest landmarks are a church, a school and shops near the main stop. The beach is a mere 1.5 kilometer walk down the village bus stop.

Arambol sees a hot and humid climate most of the year. May to August is usually the rainy season when the majority of sea-sports are suspended. Therefore, tourists usually avoid visiting Arambol during this time. November to March is usually the best time to visit, with the majority of events occurring between late January and early February.

What are the coordinates of Arambol?