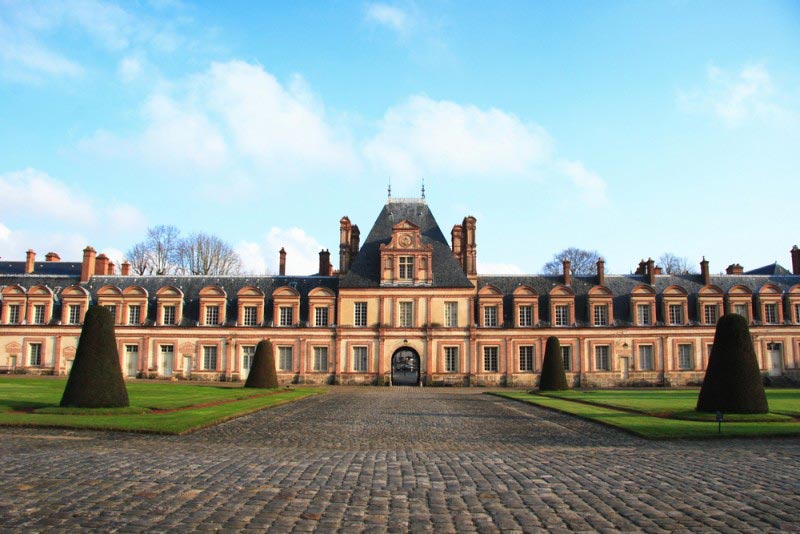 The Palace of Fontainebleau, or Chateau de Fontainebleau, is a royal residence used by French kings and royal families. Beginning in the 12th century, the chateau was used as a medieval hunting lodge by King Louis VII. Located in the forests of the Île-de-France, Fontainebleau was the perfect choice for a residence not far from the capital in Paris.

In the 16th century, François I recreated the lodge, transforming it into the Renaissance palace it is today. Beginning in 1528, the project of embellishing the royal residence began with the earliest builder, Gilles le Breton, including his work on the Cour Ovale in the eastern part of the complex.

The architecture and art of the Palace of Fontainebleau inspired artistic evolution. François I brought artists from Italy, who spread the Renaissance to France. Rosso Fiorentino was the artist who created many of the palace’s frescoes and stuccos from 1533 to 1540. Fiorentino worked in the Mannerist style and his work incorporated themes from Greco-Roman mythology. Francesco Primaticcio also created frescoes, along with Romantic bronzes, the Cortile of the Belvedere and the Palazzo della Valle.

After François I, construction on the palace was continued by successors, even through the 19th century. Today, the palace is made up of five courtyards surrounded by buildings and filled with gardens. The grounds feature the Forest of Fontainebleau and many gardens, like the Grand Jardin on the east side. Originally consisting of flower beds and a canal, the gardens later became Parterre du Tibre, and today are primarily lawns with flowers along the borders.

The Chateau de Fontainebleau now houses the Ecoles d’Art Americaines, an art school for American students. Tours are available of certain parts of the palace, like the Grands Appartements (including the Papal Apartment), the chapels, museums, and galleries.

Where is  Chateau de Fontainebleau?

The Chateau de Fontainebleau is located about 55 kilometers (34.5 miles) south of Paris in the Department of Seine-et-Marne in Île-de-France. The town and palace are easily accessible by car. Another option is to take the train to Fontainebleau-Avon station, then transfer to the Ligne. A bus towards Les Lilas and get off at the Château stop. There is also shuttle service available from Paris directly to the château.

The seasons are fairly mild in this region, which enjoys a maritime climate. Fontainebleau is a good place to visit any time of the year, but is especially pleasant in the summer time. Summer boasts mild temperatures and less rain than spring or autumn.

The Chateau de Fontainebleau is open year-round, but has longer hours of operation during the summer for the chateau and the courtyards. The months of later hours run from May to September.

The town of Fontainebleau is known for its Sunday morning markets, making it a great spot for a weekend getaway or day trip from Paris. The palace is not open on Tuesdays.