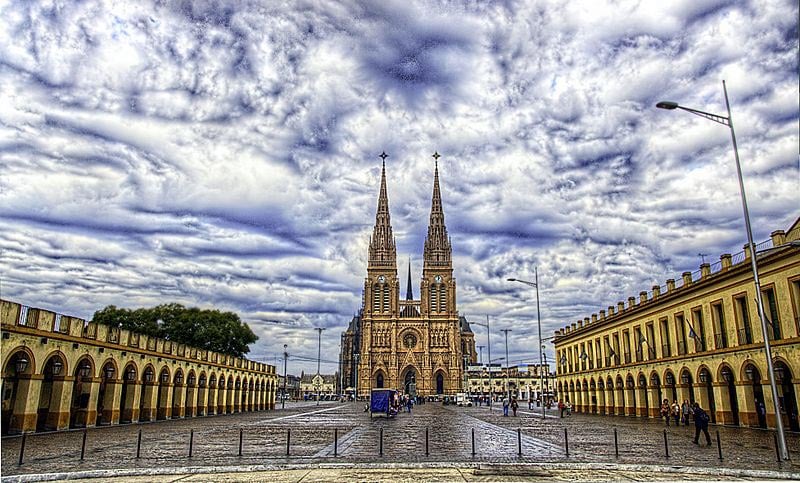 Basílica Nuestra Señora de Luján is one of the most important pilgrim sites in Argentina that attracts millions of worshipers and tourists every year. This basilica is situated 43 miles west of Buenos Aires. Luján is known for its traditional and warm hospitality.

The origin of this scared shrine dates back to 1685 when a small chapel stood at the place of the Basilica. In 1730, it acquired the status of a parish. Due to the increase in the number of the faithful , it was decided to build a larger church, which was opened on December 8, 1763. The sanctuary was pulverized in 1905.

On May 6, 1890 the Father Jorge Maria Salvaire began construction of the building that stands today. A French architect, Ulderico Curtois, was made in charge of the project. The church was inaugurated in December 1910.

There is a beautiful gothic basilica in Lujan, which is one of the most revered sites in the country. The image of Our Lady of Lujan was artistically made in Brazil. The image was made along with the image of the Santisima Madre. Anonio Farias Saa, a Portuguese estate owner of Sumampa in Argentina wanted to make a chapel for the Virgin. He asked his friend, who resided in Brazil, to send an image that exemplified the Immaculate Conception of Maria. The image was then placed in the house of Don Rosendo.

Many pilgrims throng the place from far-flung regions to pay homage and to offer prayers. On the 8th of December and the first Saturday of October every year, thousands march on foot from Buenos Aires towards the basilica of Lujan. They dress up in beautiful white tunics and a celestial blue mantle which represents the colors of the Argentina flag. The first youthful peregrination was made in October 1975 when a group decided to march towards the sanctuary, and since then has initiated one of the most popular events in Argentina.

The Basílica Nuestra Señora de Luján is situated in the small city of Lujan that lies to the west of Buenos Aires, the capital of Argentina. El Palomar Airport is at distance of around 51.6 kms from the Basílica. You can hire a taxi or choose to travel in a bus to reach the church.

The best time to visit Basílica Nuestra Señora de Luján is during fall (Mar-May) and spring (Sept-Nov), when temperatures are mild.

The Basílica Nuestra Señora de Luján opens from 10:00 am to 5:00 pm on Mondays through Fridays. On weekends, the closing time is 6:00 pm.

Admission to the Basilica is free. For crypt tour, the admission charges are AR$ 4.