Home » Where to Eat at the U.S. Open : Restaurants near Arthur Ashe Stadium

Where to Eat at the U.S. Open : Restaurants near Arthur Ashe Stadium 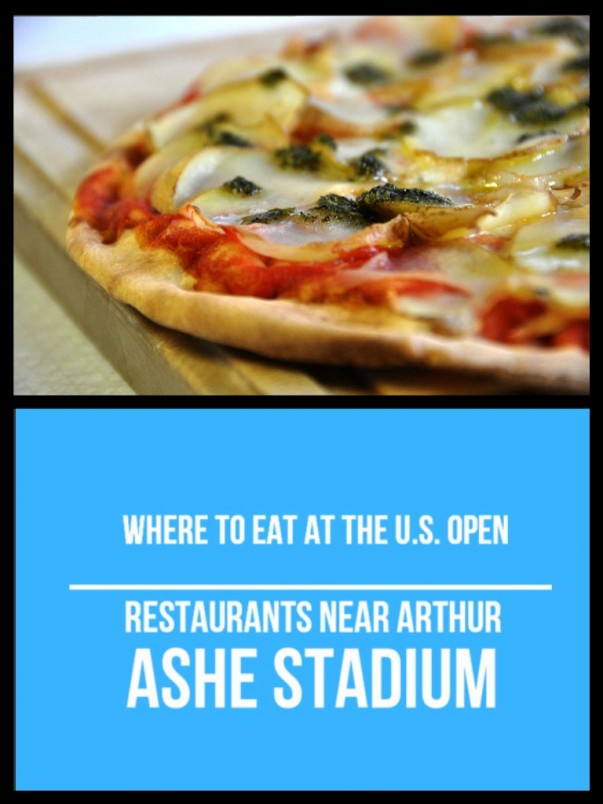 Wondering where to eat at the US Open? Here are some great restaurants near Arthur Ashe Stadium

August and September bring a new buzz to New York every year. This is not just the excitement of the knocking fall. The enthusiasm, also stems partly from the tennis fever that engulfs the city during this time. The US Open Grand Slam Tennis Tournament, held primarily in the Arthur Ashe Stadium at the Queens Borough, creates a special fervor in the area. This stadium in the Flushing neighborhood attracts tennis lovers, from all over the world, who come to cheer for their favorite players, or just catch the action in the arena. It is no wonder that eateries, restaurants, and food joints have their cash registers ringing during this season.

The Arthur Ashe Stadium, considered the largest tennis stadium in the world, is self-sufficient when it comes to food options. Visitors to the stadium can dine at a food village or they can choose to dine at fine dining bars and restaurants, like the Champions Bar & Grill, Patio Café, Aces, Heineken Red Star Café, Oyster Bar, and the Cuban-inspired Mojito Restaurant and Bar. Many of these do such brisk business that you will need to make advance reservations just to get a seat. If you are looking for other options, for places to eat at between the US Open matches, you can find an array of options in Flushing and Queens.

Deluge – After an exhilarating day watching the tennis tournament, the Deluge, in the Sheraton LaGuardia East Hotel in the 39th Avenue, can be a luxurious way to unwind in the evening. Its New American fusion food fares are complemented by a rich selection of 4400 wines. The fine dining ambiance, with floor-to-ceiling waterfall, antique décor and wooden tables, creates a warm and inspired aura for every guest. Prices range from $16 to $28 per entree.

Mingle Beer House – In need for some hot and comforting Chinese in a fine dining setting? Head to this establishment in Flushing, on the Prince Street, near 37 th Avenue, called Mingle Beer House. This restaurant offers Taiwanese specialties with Belgian beers. Rates range from a single dish of $7 to a large buffet selection for a flat rate of $25.

Mapo B.B.Q. – If you are famished for some succulent smoked meat, after a tiring day at the US Open, try the food at Mapo B.B.Q. A Seoul-eatery-inspired restaurant, at the 41st Avenue in Flushing, this place attracts Korean expatriates, and lovers of Barbequed Beef Ribs and other Korean dishes. The most popular item on the menu – Mapo Kalbi costs $31.95, and prices range between $11.95 and $34.95 for other items.

Mamak House – Located on Farrington Street in Queens, Mamak House has a range of Malaysian fares like Satay, Beef Nasi Kandar, and the sweet, icy, and delicious Ais Kacang. The restaurant is well known for its warmth and homely hospitality. Price of a dish ranges from $7 to $20.

Bitgoul – This Korean address in Queens is renowned for its quality food and pleasant ambiance. Open daily from 9:30 AM, service continues till the wee hours of the night (2 AM). This Roosevelt Avenue restaurant offers authentic Korean fares that include succulent beef barbeque and seafood at decent prices ($7.99 to $15.99).

Nick’s Pizza – Are you craving some good pizza? If you have no issues getting out of Flushing, Nick’s Pizza in Forest Hills, at the Ascan Avenue, provides oven baked goodness with fresh ingredients and wine. Cannoli is another popular item on the menu. Pizza prices are pretty standard - $11 to $13.

Ganesh Temple Canteen – If you are a vegetarian or a vegan, this Bowne Street restaurant may soon become your favorite. Offering an array of South Indian dishes, at as low as $2, this canteen beside the Ganesh Temple is open from 8:30 AM to 9:30 PM. Popular items on the menu include Masala Dosa and Onion Chili Uttappam.

Little Pepper – A Chinese restaurant on Roosevelt Avenue, Little Pepper or Xiao La Jiao is known for serving big portions of food. So, if you and your friends need to catch some lunch before heading back to the next match, this is a good option. Remember to carry some cash, as the establishment does not accept credit cards. Rates range between $7.95 and $17.95 (remember: big portions).

Tortilleria Nixtamal – If you are okay with venturing a little outside Flushing, Tortilleria Nixtamal, in Corona, is perfect for a Mexican food fix. So, dig into the delicious chicken moles, the fresh tacos produced on-site, and other snacks, before hopping back to the stadium. Prices start at $2.

These restaurants are but a few options for places to eat at between US Open matches. There are many more eateries, food carts and trucks in the Flushing neighborhood that will enamor you with their reasonably priced food and quick service. Make sure to try some while you are in the area.

« Top things to do and see in Switzerland Elope to Paris : A wedding destination for the eternal romantics! »