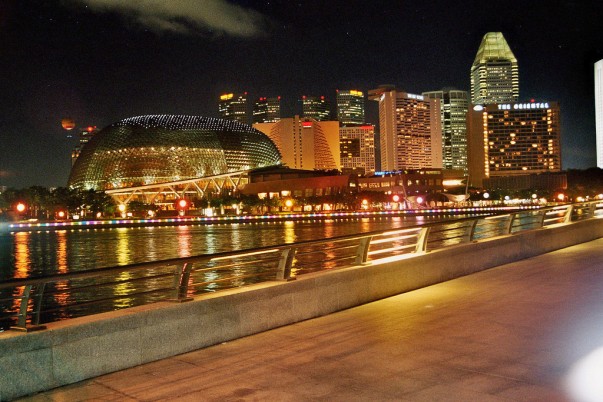 A View of the Singapore City at Night.

One of the prettiest destinations of the world, Singapore, in all its beauty and glory, is a sure shot place for vacationing. A holiday here can unfold a deep sense of mystery, comfort, adventure, romance and fun. Brought to world prominence by Sir Stamford Raffles, a 19th century British civil servant, in 1819, Singapore offers you many avenues to unwind yourself.

You can explore places like Jurong Bird Park, East Coast Park, Singapore Zoo and so on, then the night life has the sizzling tours to Sentosa Island, The Night Safari and The Disney Adventure Ride at Clarke Quay.

Singapore is known for its shopping carnival that takes place every year. Orchard Road, Tanglin Mall, Centrepoint, Suntec City Mall and Plaza Singapura are some of the popular shopping centers in Singapore that you can explore during your Singapore Tour.

The 'Lion City' of Singapore is the centerpiece of Southeast Asia. Situated off the southern extremity of the Malay Peninsula at the narrowest point of the Strait of Malacca, Singapore comprises of 63 small islands.

Spread over an area of 710 sq km, Singapore is a stunning destination waiting to be explored by you during your tour to Singapore.

According to the latest survey, Singapore has a population of about 5 million people.

Singapore Dollar (SGD) is the currency of Singapore.