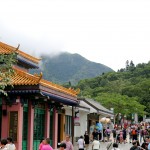 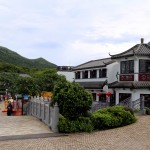 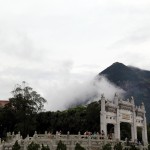 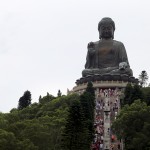 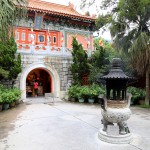 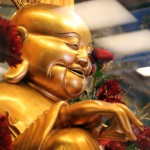 After enjoying a 25 minutes of cable car ride starting at Tung Chung Cable car terminal and savoring some unobstructed sea and land views, now it was time to explore Ngong Ping village. This culturally rich and spiritually inclined village aims to keep the local culture and spiritual integrity of this area alive. A giant Tian Tan sitting Buddha statue is the first thing which catches one’s attention after alighting from cable car. Surrounded by lush green hills and lavish landscape, this area is quite peaceful and serene. I noticed some interesting artifacts like a Spool Movie camera, lights and director’s chair near the cable car at the alighting point. Moving a little further, I entered the village complex with beautiful, well-laid cobbled Stone Street leading to an array of souvenirs, clothes and food outlets. Large replicas of Donuts and Popcorn buckets were gracefully placed at street corners as a part of a promotional roadshow by a film company.

Walking further down the village walkway, I noticed a Bodhi tree near ‘Bodhi Wishing Shrine’. Locals believe that that one’s heartfelt wish often comes true by standing under this Bodhi tree, a good vantage point to click some interesting pictures. ‘Walking with Buddha’ is another informative and entertaining multimedia presentation show showcasing a complete overview of Lord Buddha’s inspiring life. Ngong Ping’s international cable car gallery houses some interesting life-size replicas of Cable car from countries like China, Switzerland, Brazil, and France among others.

Walking further down towards the Sitting Buddha, I saw an ornamental archway known as ‘New Pi Lau’ leading to the central walkway known as Bodhi path skirted on both sides by Twelve Divine generals. According to Buddhist mythology, these twelve generals are considered to be protectors, wherein each one is assigned a span of 2 hours a day. This part of Ngong Ping village distinguishes the spiritual part from the cultural and retail sections on the other side. Landscaped Chinese gardens are another interesting attraction here which can’t be missed. Earth temple or ‘Di Tan’ is a large open complex in front of Big Buddha and Po Lin Monastery which becomes a venue for religious ceremonies.

Po Lin monastery in Ngong Village is considered to be one of Hong Kong’s most important Buddhist monasteries and an important Center for Buddhist Pilgrims. This monastery is architecturally rich and has some marvelous and intricate interiors comprising of colorful carvings, Buddhist statues, and flower decorations.

Sitting Buddha, as it is popularly known, is a Giant Buddha Statue erected gracefully atop a hill with 268 steps to reach its base. This 34-meter high bronze statue faces north and could be seen blessing the nation in its most dignified and humble pose. The spectacular sea and land views could be equally enjoyed while experiencing the peaceful spirit of this place.