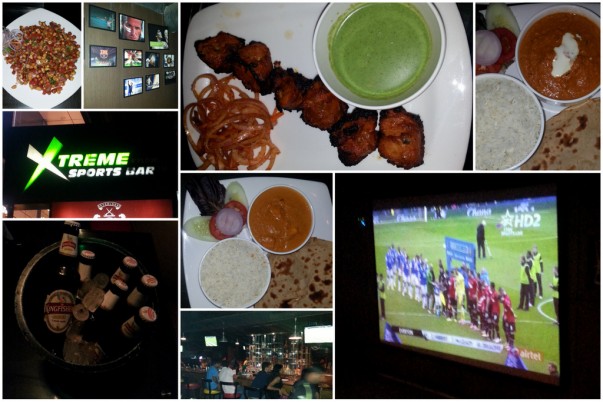 Sports has undergone many innovations in the past decade. The emergence of Premier Leagues is various sports bounds people together and gives another media to talk about. India too took the plunge few years back with the IPL for Cricket. The other innovation for the Indian market has been giving a place for people to socialize and watch matches together. These sports bars are a old phenomena in the west which has come to India and causing big waves. These are great places which host people over a few drinks and limited food menu with big screens playing various matches. They have specially been a hit with the younger generation. With the current Football Premier League and Indian Premier League in progress, I thought of checking out one of the sports bar in Bangalore. Of course there are many choices, however I set out for Indiranagar area and chose Xtreme Sports Bar on the 100 ft. road.

100 Ft. Road on Indiranagar is one of the most sought after commercial destination. It ranges from the old airport road to old Madras road. Xtreme Sports Bar, Bangalore is pretty much in the middle of these two roads, its located on the 4th floor above Tommy Hilfiger Store.

Since the dining hours have now been revised in Bangalore, it is now open from 12 noon until 1AM on Friday & Saturday, while it closes at 11PM on other days. Happy hours are until 8PM. The parking can be a challenge, the valet takes care of that.

Commercialization also has some drawbacks as people look to open shops everywhere. I was a bit surprised that the entry to a sports bar was a small corridor leading to a lift taking you to the 4th floor. However once I came in the place is fairly big with a bar in the middle, loads of small TV's playing sports matches and 1 big screen projecting the most sought after match. They also have a snooker and a foosball table

There are a few smoking rooms, however I settled on a sofa corner with a bean bag. However it was comfortable on a Sunday evening, I feel the area and layout can still be improved.

The service was really quick and pleasing. My table was waited promptly every time and suggestions were made on dishes. I'd ordered a basket of beer and every time I was finishing the drink, the server was available to open next one. The service easily scored over the ambiance and was probably the reason I felt comfortable.

Its really hard to write about prices for a sports bar as it really depends what and how you want to enjoy. There are all kinds of drinks available on the menu, a Kingfisher pint is priced about INR 200 ($3) which gives you an indication. If you are looking at a couple of beers with a starter and main course for two, you could look at about INR 1800 ($30).

Sports bar generally are limited on the food options which is true to this place as well, however I was pleasantly surprised that the food quality was pretty decent which is not the case in all bar's.

For the starters I went in with regular peanut masala (called rock and stones here). It was served generously and had great combination of masala, the green chili made it really amazing, a great accompaniment to my drinks. I also went with a potato basket and fish tikka. The potato basket came with french fries, potato smiley's and wedges, one of the thing I liked was that the oil was just optimal and it tasted nice, nothing too great but just right. I loved the fish tikka, it came with 6 pieces served with onions and chutney and was cooked perfectly. A good fish tikka should taste and melt just like a malai (butter) which was true with this one. It was appealing in the looks as well, wanted to order it again but then I would not have been able to go for the main course.

For the main meals I tried paneer butter masala and butter chicken. Both the dishes comes with a bowl of rice and 1 tandoori roti each. Made in very similar gravies, both paneer and chicken too had a nice taste and went well with both rice and roti. Although I was feeling full, I'd couldn't resist finishing off the two dishes.

Overall I would say its a nice place to enjoy with your friends, have a couple of drinks with the game and some food to follow, expect an average ambiance.