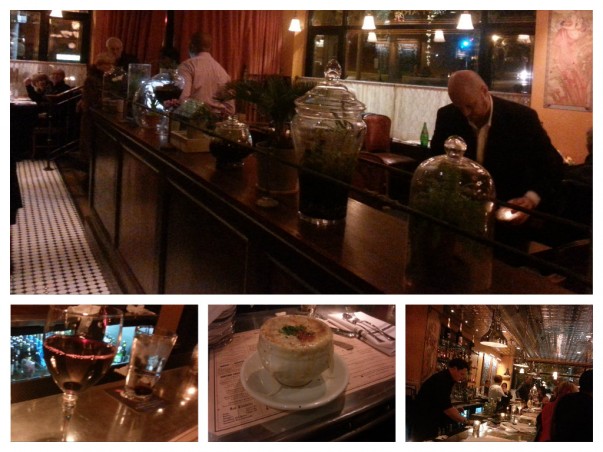 Review of Paris Restaurant in Philadelphia

Paris is a perfect study in the everlasting conflict between marketing and reality. The place is marketed, and brilliantly so, if I might add, as Chestnut Hill, Philadelphia’s version of a genuine Parisian bistro. However, as well and good as that all is, this is a business, run by someone in the United States, and it has to make a profit. Therefore, corners are cut, liberties are taken, and what you end up with is kind of mediocre faux French food.

Two observations here: first, this is not Paris’s fault. I would venture to say that no restaurant customer in Philadelphia is willing to spend the money or invest the time it requires to patronize a place that prepares authentic French bistro cooking. And for the restaurant, attempting to do this is a recipe (no pun intended) for going broke. Given the limitations of the real world, Paris does very, very well.

Second, I really liked this place. The ambience, in particular, was terrific. I would recommend it for dinner in Chestnut Hill, where there are not a lot of dining options anyway. This review is going to sound like I’m sniffing and turning up my nose, but the exact opposite is true.

Paris is on Germantown Avenue in Chestnut Hill, one of Philadelphia’s nicest neighborhoods. The Avenue is cobblestoned, the neighborhood is full of lovely houses, quiet streets, and a lot of Philadelphia’s more prominent citizens. If you can, show up a little early and spend an hour strolling around taking it all in. It’s really pretty, and there’s always parking on the streets.

I loved the ambience at Paris. First of all, they pretty much nailed the décor part of it. There’s a nice balance between functional and fussy, with just the right amount of Paris-related stuff. For instance, the bar is zinc, which is great, and the dining room has a busy, cosmopolitan feel.

The wait staff is fascinating, and expert. It was like an old Benneton ad – everything from graceful, poised young black men sort of sidling through the crowd to your more blue-collar get-it-done Philadelphia types to a maitre’d in a perfectly pressed shirt and tie. It was an incredible diverse group of people who were just plain interesting to watch.

Finally, the crowd. Absolutely fascinating as well and a reminder, as with the wait staff, that Philadelphia is a very old city, is home to all kinds of ethnic groups, social classes, traditions and histories, and when they all mix together, the result is completely unique. There was a great scene at the bar, which included four or so black ladies who were obviously pals from work, and having a great time laughing and chatting together to a pair of the most beautiful women I’ve ever seen down at the end to this power couple that sat next to me. He was black, and wearing a suit that must have cost what I make in a month and fit him flawlessly. God, I wish I could get my suits to look like that. His companion was an absolutely stunning Asian woman of about thirty – diamonds, furs, the whole deal. And at some point, for some reason, they began to argue – very politely, very quietly – and he read her the riot act for something she hadn’t told him about. I could have sat and watched this all night. Wonderful.

I ate at the bar, so I worked with the bartender and a runner, so no comment, really, on this.

Not cheap for Philadelphia -- $42 for a glass of wine (this was quite expensive) an entrée and an appetizer.

I only had two dishes – an appetizer and an entrée – so my comments on this are based on the world’s smallest sample size.

The appetizer was French onion soup, and this was perfect. Onions, broth, the correct topping of browned Gruyere, everything. This could not have been better, and was perfect for a cold fall night. This is five out of five.

Where things got a little strange was the cassoulet. A cassoulet is a French version of a casserole. Typically, and correctly, this is a large pot into which go a lot of white beans, broth, spices, various forms of browned meat (sausage and pork bellies, for instance) and some sort of game bird, usually duck or goose or sometimes chicken. The whole thing is then allowed to simmer for at least three hours and the broth is allowed to cook down. The eventual result is the world’s richest, heartiest and most flavorful stew, with a dark, strong crust on the top. When the French want to make something hearty, they don’t screw around – I remember a French friend making me something once that she said they made back in France when they were on ski trips, and it was a sort of potatoes au gratin, but with more cheese, butter and eggs in it than I believed possible. It weighed like lead, and had more calories in it than I consume in a day. Man, was it good. A cassoulet is modeled along the same lines.

However – and this is sort of the point here – you cannot turn out something like this in thirty minutes, on a Saturday night in a busy restaurant. It’s just not possible, given the physical laws of the universe we collectively inhabit. One option would be to premake it – start a large cassoulet first thing in the morning, and serve it in the evening. However, then you have to try to guess what people are going to order, throw out anything that’s not consumed and/or run out of it if it’s popular and have disappointed diners.

The other alternative is to kind of fake it, which is what Paris did. What arrived was a shallow iron dish with a kind of watered-down cassoulet in it. Plenty of beans, pork belly, sausage and garlic and then, oddly, a single leg of duck inserted into it at an angle. Rememer, a cassoulet is all about richness. This was not particularly rich, and the key ingredient wasn’t integrated into the dish – which is the entire point – but plopped on top of it, and obviously had been roasted separately and added at the last minute.

I liked this place – I genuinely did – and I will go back. However, to do real business, they have had to compromise, so be prepared.