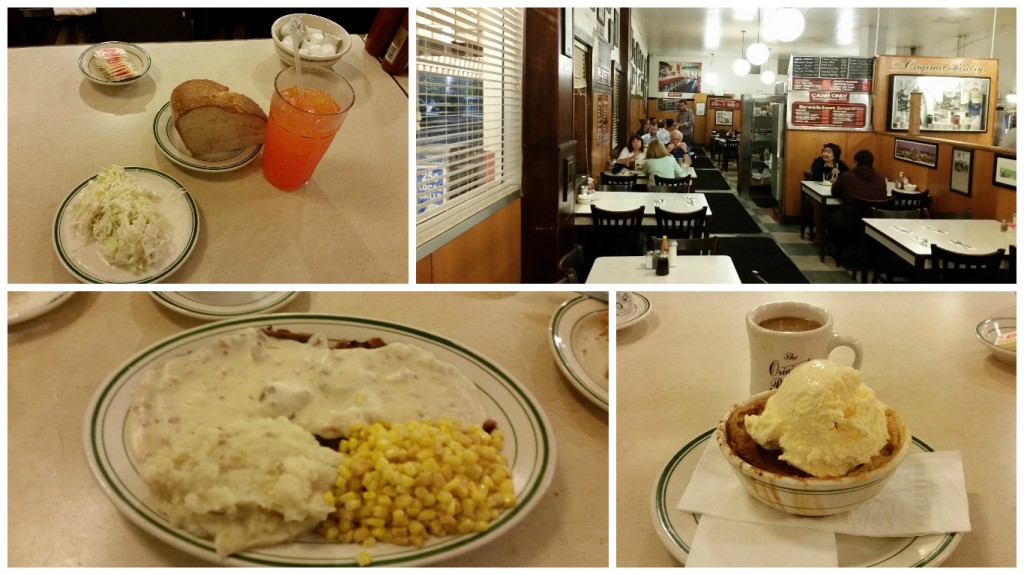 In classic LA fashion, they’ve turned what was a basic diner and has been since 1924

The diner is a uniquely American invention. It was originally a side effect of the construction of the interstate highway system, in the 1950s. The idea was to create a kind of restaurant where people could quickly, efficiently get decent food into them – calories, really – and then get back on the road. This is supposed to be simple, fast, straightforward food for people who want to get back to work. Any American who’s been in this country for more than ten minutes has seen the inside of dozens of these places. They’re all the same, which is part of the point. No matter where you go in this country, you can get eggs, bacon, toast, potatoes and coffee. Ideally, you also get it sitting at a counter, while reading the paper, watching television or whatever.

This, however, is LA. It’s not America. In fact, it’s not the planet Earth. And in classic LA fashion, they’ve turned what was a basic diner and has been since 1924, apparently, into a mini version of Knott’s Berry Farm. They merchandise the daylights out of it. They fetishize it. And as a result, this place is profoundly annoying. The food is mediocre – diner food is not exactly for the Prince of Gourmets. But all in all, this place is a pain in the … uh, neck ... and should be really a last resort.

Kind of All-American diner, but with a massive side order of hype. There is a seating area with tables, and a counter, where you can watch the cooks work, such as they do. The décor is Fifties restaurant – linoleum, windows with Venetian blinds, big glass lamps. The menus are written on the wall in chalk, or posted.

One of the most irritating things about the Pantry is the relentless, constant and deeply cheesy merchandising of trinkets. I’ll get back to that in a little bit, but it sure contributes to the ambience.

Slow and annoying. My meal took about four minutes to prepare, and then sat on the pass-through for five minutes or so cooling down while the waitress was down at the other end of the counter yukking it up with another customer. She also delivered every item with an incredibly intrusive and annoying “Isn’t this good?” schtick. “Aren’t those the best mashed potatoes you ever had in your life?” I mean, there my dinner sits, and I would like to begin to eat it, and there, literally at counter level, is this little face that I have to deal with before I can dig in. Plus, the counter was a mess, with debris left all over it next to where I was sitting, and it remained there for most of the meal. Again, this is a diner, so elaborate service isn’t the point. But at least paying attention wouldn’t be a bad idea.

Cheap: $38 for dinner, dessert and coffee

Mediocre. This is diner food, remember.

For dinner, I selected chicken-fried steak. This is a rural recipe, consisted of a piece of steak pounded flat, washed in egg, breaded and then fried. The steak at the Pantry came out of a box somewhere – I watched the grill man unwrap it, throw it on the grill, and fry it. It came with a LOT of gravy, which despite all the uptalking, was not that great, along with a pile of corn, a bunch of mashed potatoes (not bad) and a big serving of cole slaw which was sitting in a puddle of sauce, and a lot of bread. Again, none of this food was particularly great, which is fine. The goal of a place like this is to get calories into you, so you can get back to work, which the Pantry did. Not great, not bad – diner food.

Dessert was peach cobbler, which was pretty bad. Heavily sugared pie crust-like stuff served in a big bowl, with ice cream on it. This was a TON of sugar and essentially, pie crust, without much actual peach in it. Again, I’ve eaten in a lot of diners, I know what to expect, and this was somewhat worse than what you’d find in a truck stop in, say, Ohio.

In the end, though, the thing that made this place bad was the relentless merchandising. The entire structure is brightly lit, with a big painted sign on the outside wall. The interior has all kinds of framed examples of all the neat stuff you can buy – coffee mugs, t-shirts, hats, all of it. There are pictures of all the famous people in LA who have graced the Original Pantry with their presence which, given that the place a) is in LA; and b) is owned by the former mayor, is a lot of people. The place even has an incredibly annoying web site with sound effects, and, again pictures of all the famous people who have eaten there. This isn’t a diner – it’s a tourist trap, which, given that this is LA, shouldn’t be surprising.

If you visit the Pantry, you’ll get fed. But you’ll also get annoyed, sold to, and eventually, kind of tired of it all. Go somewhere else.