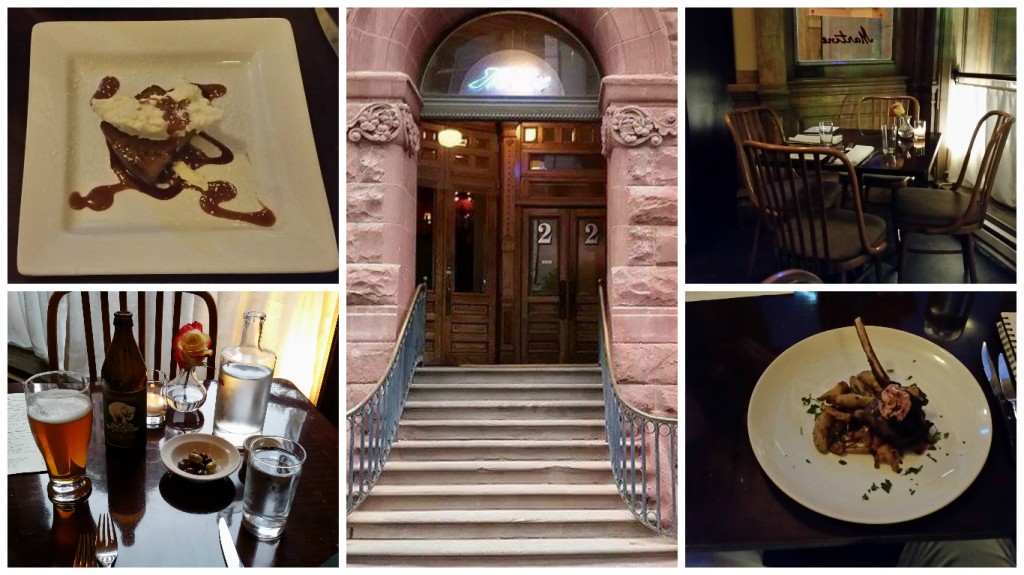 Martine Café is a place with an enormous amount of promise

Martine Café is a place with an enormous amount of promise that, unfortunately, does not quite deliver.
Most of the meal was pretty good. However, the entrée was unbelievably not, and it was also, for this market and this restaurant, really expensive. Plus, the service was slow on a night when this place was not crowded, and the general outcome was kind of a lot of promises, but no execution, in the end.

The restaurant is gorgeous. My server was really personable, I had a great table right by the window, and I was hungry. This should have been a terrific meal. The place presented itself that way. But when the meal got to what should have been the high point, the entire enterprise stalled, and I was left with the feeling of having been ever-so-slightly let down. Perhaps you won’t. But I did.

Salt Lake City is one of my favorite cities in the West. It’s sort of like Denver, in that it’s got that open, spacious feeling, and the sense of mountains nearby. However, it’s a lot smaller than Denver, and thanks to the overwhelming presence of Mormons, it also feels cleaner, and safer and more … careful.

Like Denver, a lot of the older buildings have been well taken-care of. The Martine Café is in central Salt Lake City, near the Mormon temple complex. This is the high-end area of town, with a lot of shops, cafes, a big shopping mall nearby, and so on. Wide, straight streets with a view of the mountains, and a number of nearby garages for parking. It feels very safe, very civilized.

Absolutely lovely. The building the restaurant is in is a gorgeous old Romanesque pile, with lots of wood detailing, a high pressed-tin sort of ceiling and a tile floor. It’s a nod to the early days of Salt Lake City, and has the feel of a place for men who made their fortunes in mining, or cattle, or something else and wanted some shelter from Utah’s notorious (and famous, if you ski) winters.

The table setting was nice – simple, elegant, tasteful. I especially liked the array of stuff to enjoy before the food arrived – a dish of olives, bread, olive oil. Some real care had been taken with this part of the meal, which gave me what turned out to be a false sense of hope.
The Service: Not bad, but unbelievably slow. I’m not sure whose fault this was, but I was left sitting alone with empty plates for a long time. The entire meal took ninety minutes, which is ridiculous on a slow night when I’m dining by myself and know what I want. There were only five other tables occupied in the entire place, and there were at least two servers. My server was lovely, and charming, and so on, but either the kitchen or her wasn’t really paying attention.

A bargain, overall. $66, including two beers, a complete meal, dessert and coffee.

The appetizer was Brussels sprouts, which are kind of a fad these days. These were great. One tendency when preparing these is either to drench them in sauce, or just cook them until you’re not sure what they actually are. These were great – savory, but with a reminder that these are strongly flavored, earthy veggies with a bite. The taste was sort of smoky and woody and Brussels sprout-y. Good work.

My entrée was a whole different story. I ordered an elk chop, with fingerling potatoes and some kind of seasoned butter. Elk is a cross between venison and beef. It tends to be lean, which means you can’t overcook it, and unless you do something interesting with it, it tends to be sort of bland. This was. There was also some kind of problem with the temperature of the dish. The potatoes were lukewarm, the chop was sort of hot – it had been resting for a minute after cooking, which is what it should do – and the butter was just sort of parked on it, unmelted. There wasn’t any interesting or unifying flavor holding everything together, and a very expensive cut of meat was sort of wasted. I kept waiting to find out what this dish was going to be about, and eventually, the answer became clear: not much. Damn. I love game, and this could have been amazing, but the final step just wasn’t taken.

Dessert was fine – a grilled slice of dessert bread with caramel and ice cream. Nicely done – not overwhelming, but again, this simple dessert took forever to arrive.

All in all? An absolutely lovely setting, good food, but never rising above mediocre, and one dish that just had problems. Go for something simple, keep your expectations in check, and you’ll do fine. Just don’t let the setting fool you.

« Original Pantry, Los Angeles Restaurant Review How to Spend a Weekend in Rishikesh? »