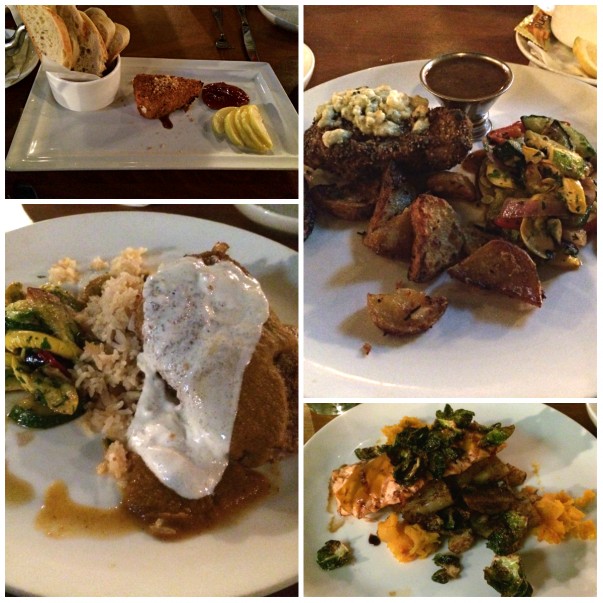 For seafood and steaks in an interesting setting, Horatio's in the San Leandro Marina is a great spot. With great views of the waterfront and a menu that includes signature dishes, like surf and turf and the seafood etoufee, several daily specials, as well as a full bar, Horatio's can be the right choice for a number of special occasions.

This restaurant has been a steady staple of the East Bay since 1971. The interesting architecture of Horatio's is designed to play on its marina location, with a built-in lighthouse and an interior designed to look like a ship, with many details that set it apart as something special. We chose Horatio's for a special family occasion

Horatio's is located along the San Leandro Marina, which is easy to find right off of I-880.

Horatio's is somewhere between fancy and casual, with the potential to be either. The food and décor point to fine dining, but the bar seating area and dim lighting gives it a bit of a tavern feel. The nautical themed décor includes round ship windows and signs pointing out the various parts of the ship. Though the restaurant dining area is very large, it feels warm and intimate, which served as the perfect place to get in out of the blustery winds along the Bay.

The service at Horatio's was very good, from the moment we walked in and were greeted by the hostess and throughout the entire meal. Our server was very friendly and conversational, and efficient as well. She worked as good servers often do, when the customers hardly notice her come and go with refills or taking empty dishes, but offering helpful suggestions when asked. The food was ready after a reasonable amount of time despite the restaurant being quite busy that evening.

The price was about average for a steakhouse, which is a bit higher than an average dinner. Our entrees ranged from about $20 for a burger and fries to $40 for a steak, and somewhere in between for seafood dishes. The portions are not especially large, with enough food to satisfy but not much more (and I say this as someone who rarely finishes an entire meal at a restaurant).

Horatio's food is excellent, from the rosemary garlic bread to the macadamia nut encrusted baked brie and each of the steak and seafood entrees we tried. The baked brie appetizer was perfectly done, and the best way to begin this celebratory meal. Served atop a sweet balsamic reduction sauce, the brie comes with a fruit compote, toasted baguette, and pear slices topped with orange-blossom honey, and the combination is perfection.

The daily specials had some interesting options, of which I was able to sample two. I selected the grilled salmon with a brown sugar sauce, sweet potatoes, potatoes, and Brussels sprouts. I was a little iffy on the idea of voluntarily chowing down on Brussels sprouts, but – and this is really saying something – these were delicious. The Brussels sprout leaves were separated and roasted, making them light and crunchy, and flat-out tasty – I'm shocked too. The salmon and sauce were great together, and the sweet potatoes made for an enjoyable dish. The other daily special I tried was the nut-encrusted mahi mahi, with a pumpkin curry sauce, served with rice and vegetables. The coating of the mahi mahi was crunchy, while the inside was flaky and well cooked. Overall pairing was interesting, though the pumpkin curry could have been a stronger flavor. Our party also ordered the peppercorn crusted New York steak, which came with blue cheese and a peppercorn steak sauce, and the chophouse burger with its delicious brioche bun.

The brunch menu at Horatio's looks nothing short of amazing, with sweet treats like pear bread pudding French toast, and savory specialties like crab cake benedicts and lobster and crab Wellington. I'm really looking forward to trying these out on my next visit.