This place does not fall in the category of fine dining restaurants- but besides Sourav Ganguly, Mohan Bagan football team, Jyoti Basu and Rabindranath Tagore, if there is something else that people from Kolkata swear by- it is the Biryani at Dada Boudi's. And since Bengalis have made quite a name for themselves in the food department, Dada Boudi's Biryani definitely must find a place in this blog.

Firstly, it is important to understand what is Biryani and how it is cooked in different states of India. For the international tourist, Dada Boudi's Biryani must find a special mention, since the flavors of the Biryani at this joint are gentle on the unaccustomed foreign palate.

Also, the place is almost like a shack with very minimal arrangements for dining in. However, ambiance is not a deterrent for loyal fans of Dada Boudi Biryani. Biryani is 'an Indian dish made with highly seasoned rice, vegetables, eggs, prawns and/or meat'. It is made differently in different parts of India. The Biryani cooked in northern parts of India, called Awadhi Biryani is very different from the Biryani cooked in southern India which is called Hyderabadi Biryani. And finally, the Biryani in Kolkata is very different from that of the rest of the country. People who have always wanted to taste Indian cuisine but were deterred by its pungent spiciness, should start with the Kolkata Biryani. 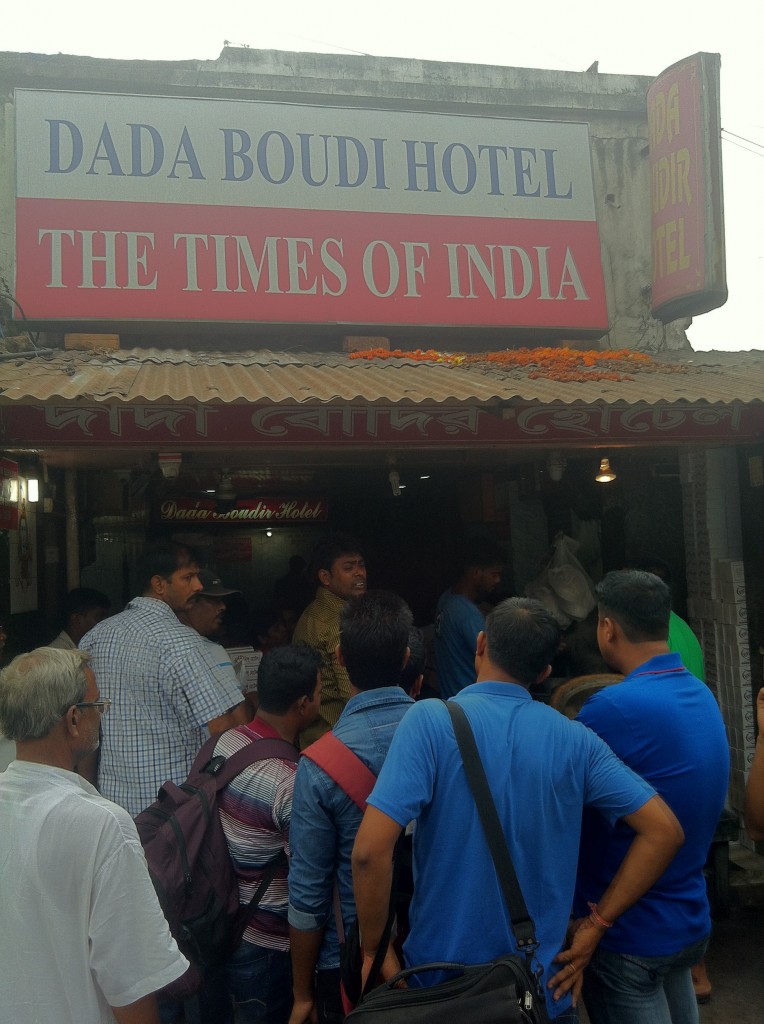 The Biryani at Dada Boudi is dry, lightly flavored, and is served with one big chunk of meat and one big potato. What is so special about one big potato in a big tray full of rice, one would think. The specialty lies in the way the potato and the rest of the dish is cooked.

The Biryani is cooked in large earthen pots placed over fire. The meat and the rest of the spices are cooked separately in a pot. Potatoes are cooked in another pot, while the rice is prepared in a third pot. All of these require different cooking times. When all of these are done, they are put together in a single pot, in layers. Embers are placed both below and above the pot. The real magic happens now. All of the cooked rice, potatoes, and meat are steamed, and attain a distinctive flavor. 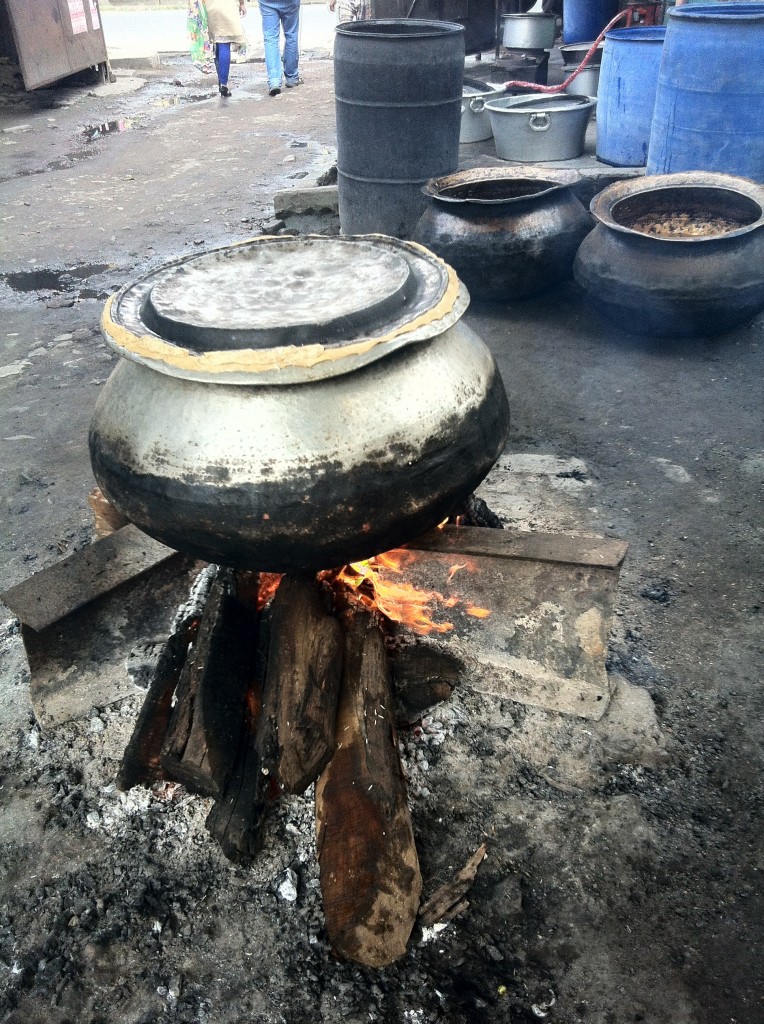 Biryani being cooked in an aluminium pot

When you reach Dada Boudi at Barrackpore, you are greeted by a scene so busy, an aroma so fragrant, and a crowd waiting so devoutly for their turn that you automatically join them without a further question. When placing an order for the Biryani, most customers specify, “Rewaj chai” or “Rewaj chara”.

This place is famous for serving the succulent meat of “Rewaji khashi” (goat that has been fattened up on a singular kind of diet, mostly pure grass”. Now, the meat of these specially raised goats, when cooked to perfection, melts like butter in the mouth and looks and tastes scrumptious. There is a way of knowing if the piece of meat you have been served has been culled from a rewaji khashi. If you drop your piece of cooked meat on the plate, it will rock gently if it has the desired rewaj (fat). Lovers of the Dada Boudi Biryani often have this mock competition among themselves to check who has got the better piece of meat. The more your piece rocks as it touches your plate, the better your piece of meat is. 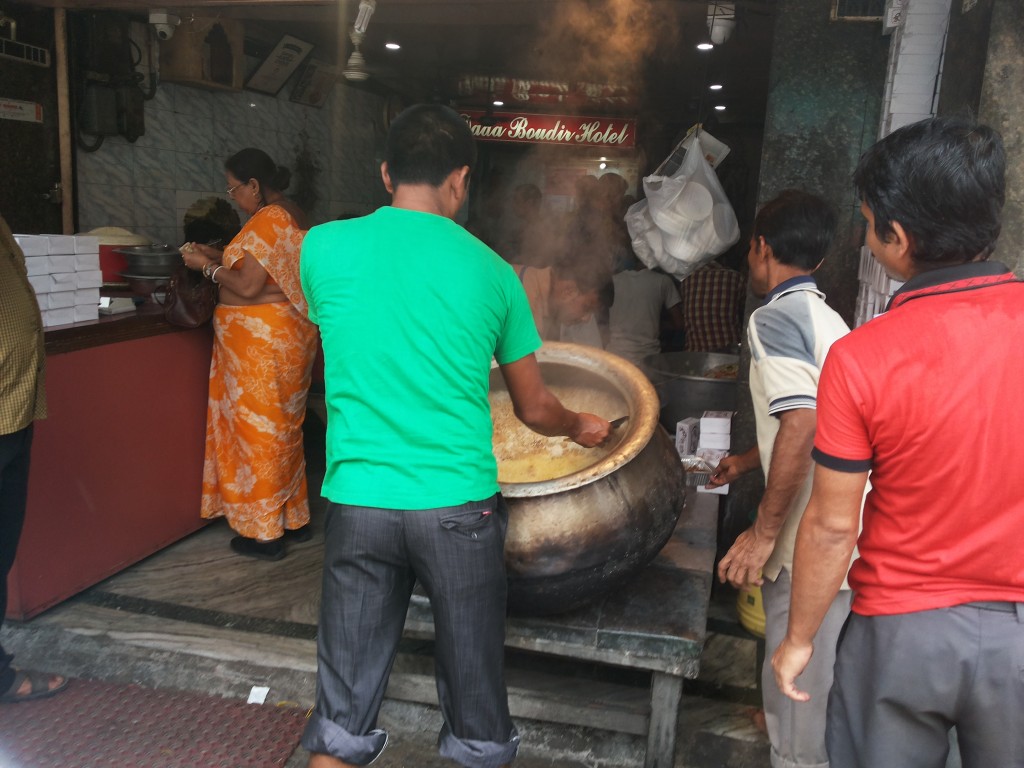 We ordered mutton Biryani and Chicken chaap. Now Chicken chaap is a dish that has to go with Biryani. In gatherings such as weddings in Bengali houses, if there is Biryani, rest assured there will be Chicken Chaap. It is a chicken dish that is cooked in gravy. The gravy contains a paste of poppy seeds, the ever present trio of onions, garlic and ginger that mark almost every chicken dish prepared in India, and curd. A little bit of saffron is also added to enhance the color. The flaming ochre color of the chicken chaap and the piquant smell of nutmeg, make for an exciting contrast to the delicate flavors of the Biryani at Dada Boudi's. 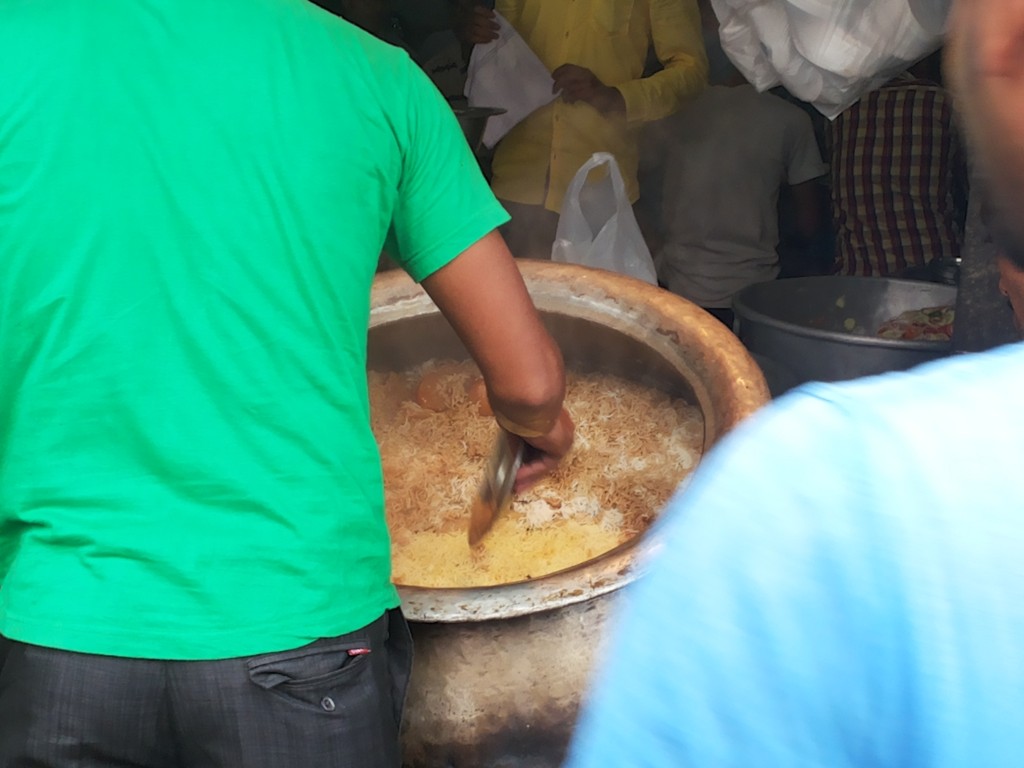 Enough! Give us our Biryani already

I personally favor the light flavors of the Dada Boudi Biryani to the screaming sapor of the Chicken Chaap. Just like the sight of a gaudily dressed woman is enough to make you long for the more comforting sight of your delicately dressed wife, so the taste and aroma of the Chaap, sends me reeling towards my favorite Biryani. But such words to describe the Chaap would be unfair, since the Chicken Chaap at Dada Boudi's, has been a favorite of food lovers for a long time. And once, my sense of smell got accustomed to the aroma of mace, I almost started to enjoy the chicken side dish.

We had ordered a take away. It is best to order a take away since the quantity of rice served in a single plate may be too much for a single meal. Coming back to the Biryani and chicken chaap.

Start off with the Biryani. Dive into it. Bengali Biryani has a great amount of rice, one big potato, one big piece of mutton and (not always) one big egg. And they give a green tangy mint chutney to go with it. So, you will need to ration the meat and potato in a way that they last throughout your meal. Of course, the Chicken Chaap comes to your rescue here. A small amount of the thick chicken gravy adds another dimension to the dry flavor of the Biryani. The chicken pieces themselves were huge and very well done. 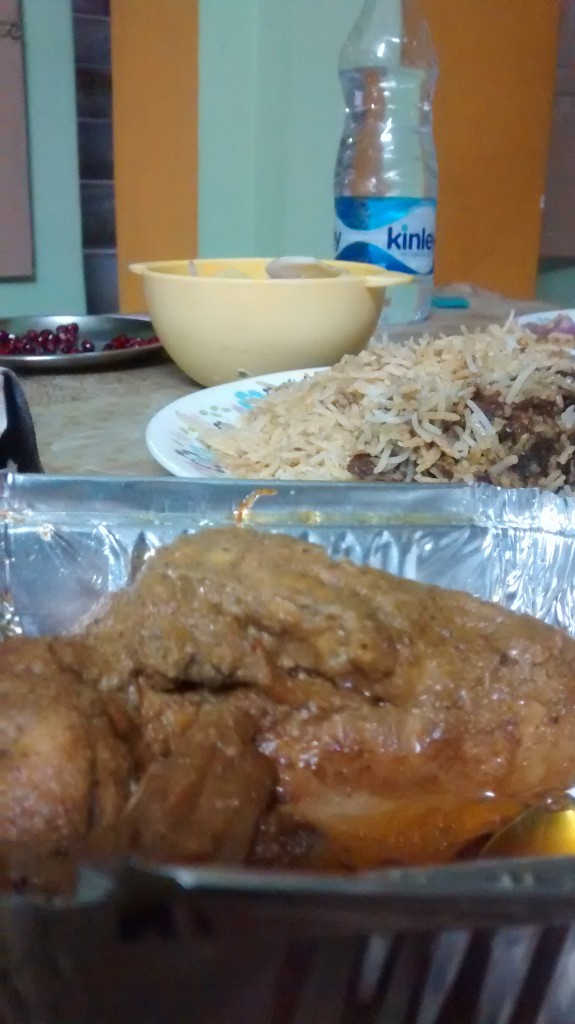 The Chiken Chaap makes a busy side cameo

One thing that this place definitely needs to be commended for, is the way they cook their meat and poultry. Both the mutton and the chicken pieces were cooked to perfection. They were tender, fleshy, moist, and yet, cooked to the core.

My family members are a big fan of the famous Rewaj. Hence, we always order our Biryani with Rewaji mutton. When moved to our plates, the white layer of fat, under the thin membrane was distinctly visible and send off gasps of admiration from hungry members of the party. The single boiled Biryani potato is a delicacy in itself, and many lovers of this famous dish prefer the potato to the meat. When the soft potato is mashed between the fingers and the plate, it sticks to the Biryani rice, reminding the eater of simpler home cooked delightful Bengali meals. So I guess, one reason the Biryani at Dada Boudi has been such a big hit over so many years is that it is actually as perfect as a home cooked meal. 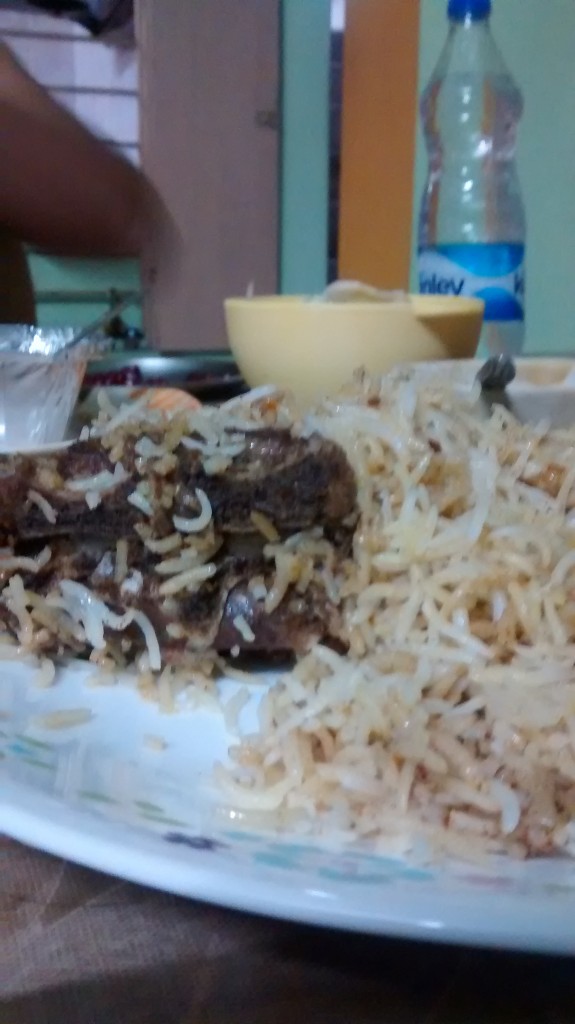 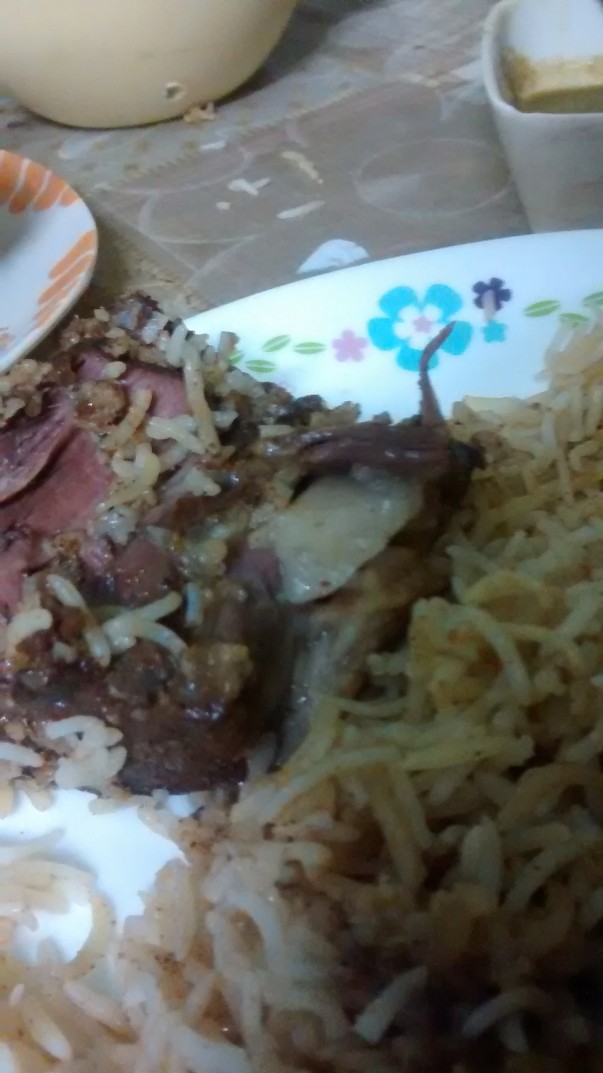 A parting word about the name of the restaurant- Dada Boudi. Dada Boudi means 'Elder brother and sister-in-law”. In Bengal, and in India as a whole, the place of an Elder Brother and Sister in law, is that of reverence for a younger brother. Th sister-in-law in turn acts as a second mother to the younger siblings of her husband. She affectionately cooks for them and feeds them, and shields them from the wrath of the elders in the family. May be this is the reason the restaurant has been named as such. It has been fulfilling the clamoring dictates of its patrons with a wholesome plate of Biryani every time.