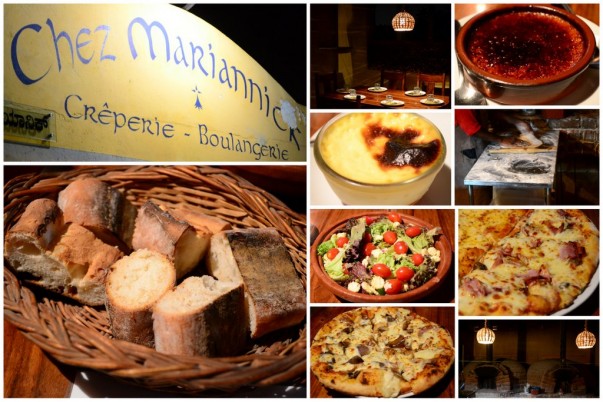 Every region in the world has its unique impressions on the culture, people, cuisine and so forth. While I traveled across Europe I found it very intriguing how these things changed in a short distance from one country to the other. However what I found common in many countries was the cozy seating restaurants, sometimes decorated with local taste in the town centers, people socializing with friends, evening eat outs and more. I loved the cuisine from pretty much each of the country. While searching for European restaurants in Bangalore, I found a French bakery, cafe and restaurant with a very outstanding name for India, Chez Mariannick Creperie - Boulangerie. While Creperie has been defined as a takeaway place serving crepes, Boulangerie means a bakery. When I called in, I was least expecting to talk to a French lady as most of the owners around here are Indians, that made me more excited to try out the place. The place has been running for more than six years now while I've passed on this road for several years and didn't realize that in one of the alleys, we could have an authentic French restaurant, so I had to ask for directions.

Varthur road in Whitefield, Bangalore in a home to many expats and a perfect location for a cafe/ restaurant like this. Coming from Varthur towards Marthahalli, cross the shell petrol bunk on the right and turn left into an alley at about 100 mts.

Its a pretty quiet restaurant with both inside and outside cozy seating areas. I could easily relate it to a typical French place with the solid wood interiors & furniture and a wood fire place for baking. The exterior had a stone sitting area in a small garden. It gave typical vibes of a true European setting and I enjoyed every moment of the ambiance.

They don't have too much of staff, just one server and a couple of helps in the kitchen on the day I went. This however did not stop the personal service as it is only frequented by few people who know the place. I've not seen any advertisements of this restaurant, neither in fact a board on the main road, whoever comes in I believe is through word of mouth. All the orders came pretty quickly and the bread was filled back on demand. I found the server very courteous and willing to help.

The restaurant also does well on the price, a weekday meal for two would cost you about INR 1000 ($17) including bread, salad, pizza and soft drinks. They have galettes & crepes on the Friday/ Saturday which come slightly higher at INR 1400 ($23). Wine is separately charged.

Chez Mariannick has a set menu for the weekdays, and weekends. While the weekday menu includes a mixed salad, bread, pizza, dessert and drinks, the weekend menu let's you choose any two, three or four items from galettes, crepes and dessert with unlimited salad, juice and bread.

The French baguette was served as we sat down, and it was one of the best baguette I've had in a few years and I enjoyed it with some butter and olive oil. The salad too was fresh with a nice mustard dressing. As I tried a weekday menu, I called in for a pepperoni and bacon wood fired pizza and another one of grilled chicken, mushroom and caramelized onions. When I inquired, I was told that they import the pepperoni and other stuff and it showed in the preparation and taste. The crust was freshly rolled and just the right proportions and it had ample amount of cheese and toppings.

The desserts can be selected from few available ones on the day and we went in for Creme Brulee and Caramel Custard and liked both of them.

Although I didn't get to try the crepes on a weekday, some of the varieties include banana, chocolate & cream; peaches, honey, cream & almond and more. The galettes include various cheese, ham, egg, chicken, mushroom and more.

Overall a nice quiet place for an evening with family or friends.