Try talking to a Bengali about food. He will launch on the subject with a passionate fury and a scientific zeal, you would not have imagined possible from a person of a seemingly sanguine temperament such as him.

So, when you are out on the streets of Kolkata trying to savor some of the food that Kolkata is famous for, one key word- RESPECT. Food, even street food, needs to be approached with reverence because if there is a religion that supersedes religion- it is food. Of course, politics and Sourav Ganguly follow. Here Dada Boudi, Nizam's and a few more restaurants are hallowed grounds. And street food is ‘serious stuff’.

Exploring the street food of Kolkata is like a treasure hunt. Expect surprises to spring from anywhere. You may find the world's best tea served at a shanty near the metro station, or you may find a sixty-year old selling the most scrumptious tacos in her cart.

1. Tea is a big addiction in Kolkata: All sorts of tea. Black tea, milk tea, lemon tea, Darjeeling tea- Kolkata loves its tea. The apparatus needed to set up shop is small and inexpensive- a big black kettle, a nice warm stove, rows of glass tumblers. With milk, sugar, water, lemon and tea leaves- you are all set. You will find little boys running around everywhere, especially in busy office localities and commercial areas, selling the warm sweet beverage.

While journeying on the streets of the unending metropolis, sweet little glasses of tea come as a relief. 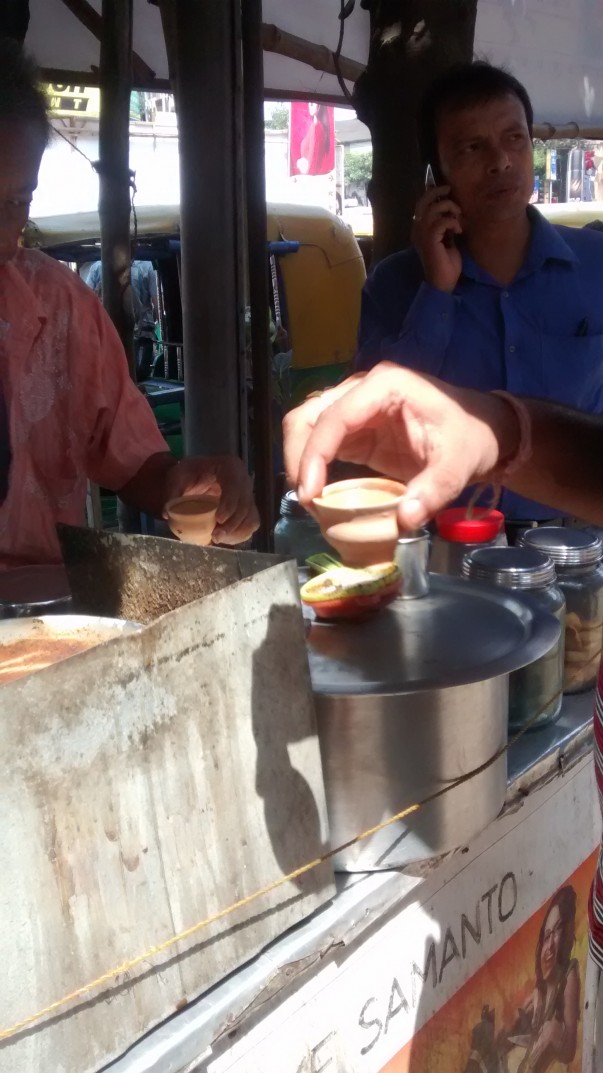 A refreshing cup of tea

2. Kochuri Torkari: The daily commuter's breakfast. Most office goers in Kolkata leave their homes very early to reach their office on time hazarding end number of local trains, cycle rickshaws, buses and auto rickshaws. Breakfast is something that has to happen on the go.

A filling breakfast of Kochuri Torkari at a roadside joint is the staple for thousands of office goers in the morning. Kochuris are balls of dough that are stuffed with a filling of choice, flattened with a rolling pin and then deep-fried in oil. In expert hands, these little things puff up beautifully like fragile golden balls.

Alu Torkari is a gravy made of cubes of potato, lightly fried in oil, and then cooked in water, with spices of your choice. What makes this duo a hit among all the Bongs is the hint of asafoetida- a common ingredient in both items.

The Kochuri Torkari sold near the Dakshineshwar temple of Kolkata is very famous- so famous that many people call on the Goddess just so that they may later indulge in the Kochuri s here.

A boy rolls out dough to make a ‘kochuri’i

3. Phuchka and the Phuchkawala: The Phuchka could well become the emblem of Kolkata one day. These are small and crisp, fried hollow dough balls, which are filled with spicy boiled potato and tamarind water. Variants of Phuchka are sold in different Indian states, but they are nowhere near as indispensable to daily life as the Phuchka. Served in the most unhygienic of conditions, this little devil is perhaps the most crucial key to the health and happiness of the food-loving Bengali.

The Phuchkawala- the vendor selling the Phuchka- makes the rounds of neighborhood lanes and can also be found standing at busy corners in market areas. His hands move like a magician as does his mind as he whips up one crispy Phuchka after another while keeping count at the same time. 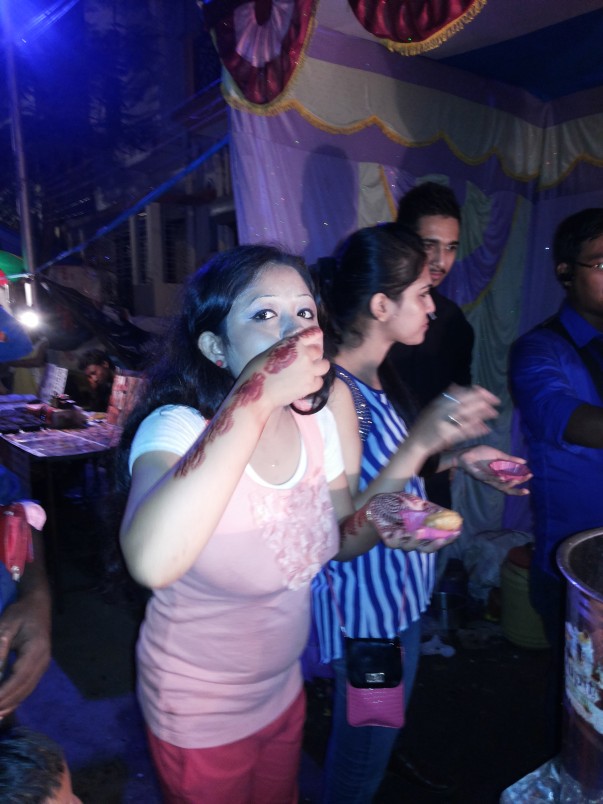 4. Jhalmuri: Carefully observe a vendor preparing Jhalmuri in Kolkata. The crummy little plastic jar into which the vendor methodically throws in all ingredients and whips up the jhalmuri seems to be place from where the ideas of standardization and differentiation originated. The basic taste of the Jhalmuri remains the same- while the tartness can be adjusted by adjusting the condiments. 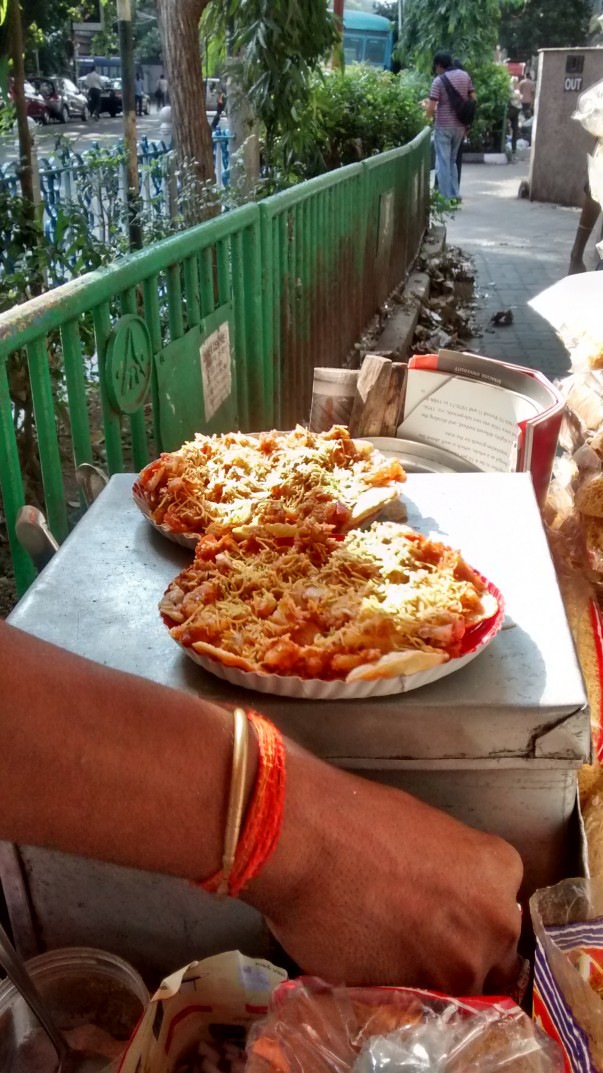 A Jhalmuriwala (Jhalmuri vendor) always carries a small lamp that he places on top of the glass counter inside which he stores the puffed rice. Even today, when most roads are so well lit that carrying around your own light seems redundant if not downright silly, you will always find a pint sized lamp in the Jhalmuri vendor's paraphernalia. It brings a ‘period feel’ to the whole experience.

5. Fresh cut fruit/ vegetables: Kolkata being a hot and humid destination, you will always find vendors selling cool cucumbers and green guavas on the roadside. The cucumber or guava is cut into edible pieces, a little black salt is sprinkled over cut fruit, and it is served on a piece of old newspaper. A nice hassle free way to get your daily quota of greens. 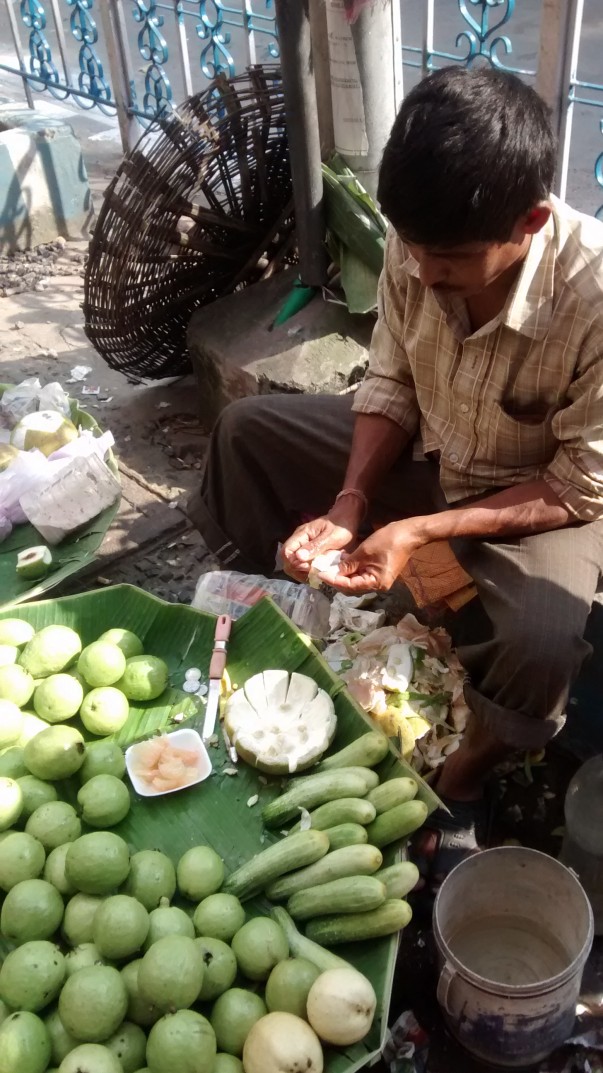 6. Langcha: This is a form of syrupy sweet made from fresh cheese. Fresh cheese is mashed together, rolled into elongated shapes, deep fried in oil and dipped in sugar syrup. Sweets are again an obsession in Kolkata, Kora Paker Shondesh, Norom Paker Shondesh, Roshogolla, Langcha, Jibhe Goja- Kolkata offers an unending variety of sweets- and all of them somehow seem to find their way to the Bengali family's dining table at every important occasion. You will find sweets prepared and presented in several innovative ways and sold in high end sweet shops at very high prices. But the langcha is an especial favorite as a street food. Maybe it is the easy-to-hold shape or maybe it is the rich sweetness- whatever be the case, the langcha is a favorite when it comes to some street-side dessert. 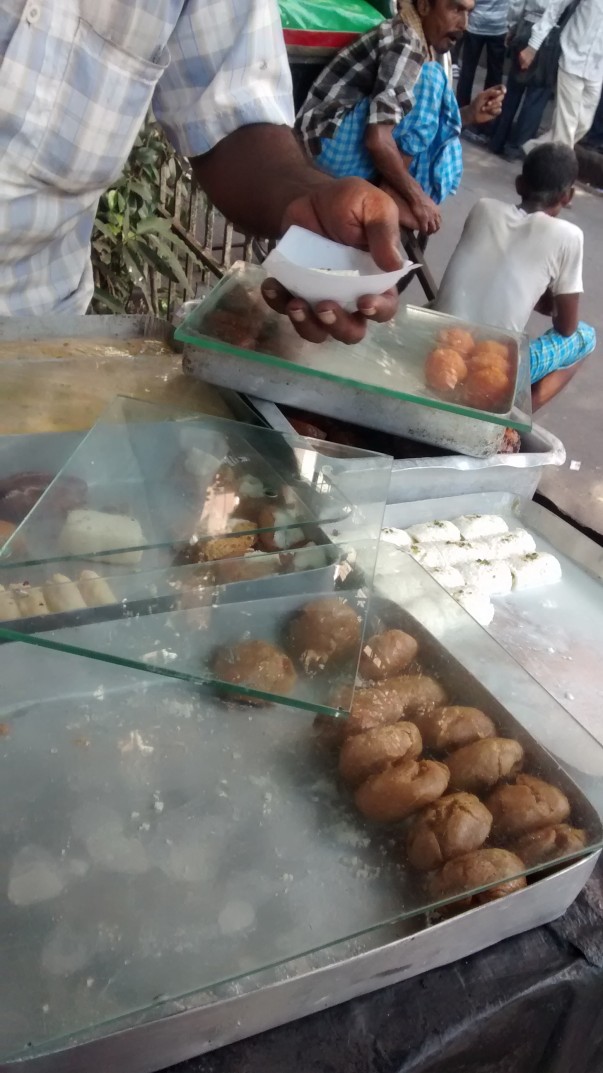 For those with a Sweet Tooth

7. Tele Bhaja: the main culprit behind the bouts of acidity that Bengalis all over the world suffer from. No matter where in the world a Bengali is, and no matter how balanced his diet is today- he has had a past dominated by ‘tele bhaja’- something he never reveals to his doctor. In fact, he continues to rendezvous with ‘tele bhaja’ even today, away from the prying eyes of his wife. ‘Tele Bhaja’ means deep fried snacks. The list of items that come under ‘tele bhaja’ is endless. Chunks of marinated fish, spiced chicken cubes, fresh cheese, grated vegetables rolled into balls with flour to bind, stems of coriander- all these can be rolled in batter and deep fried to come up with some very crunchy, and mouth watering ‘tele bhaja’. Famous for their doting ways, Bengali mothers have labored for many hours in the kitchen trying to prepare Tele Bhaja at home for their kids. But there is something about standing at a bus-stop and munching on fried stuff. Errant children soon sneak off to join their friends feasting on the Tele Bhaja being sold on the streets. 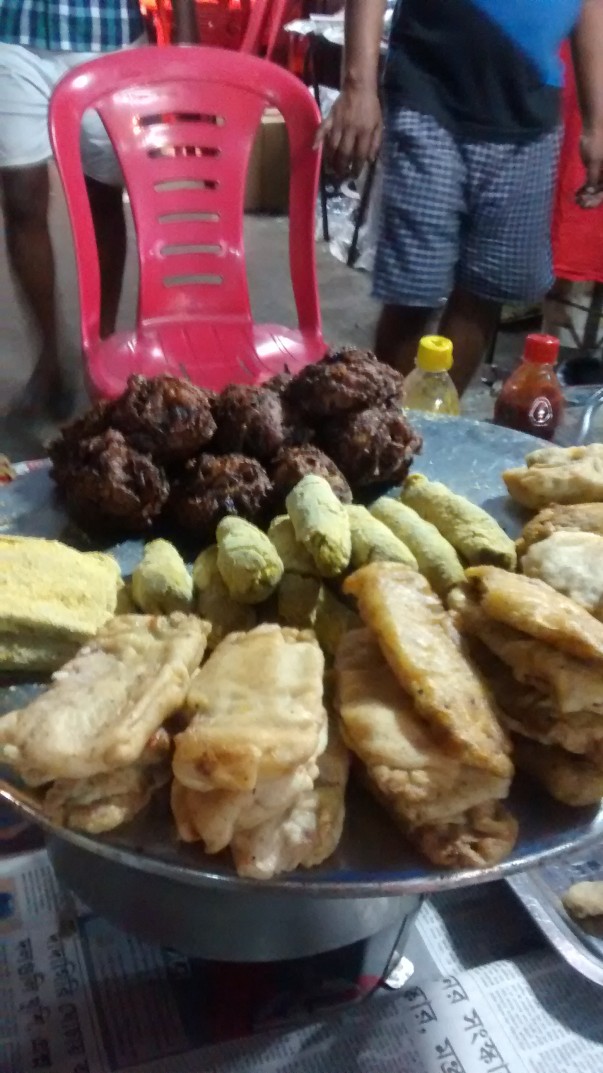 8. Egg Roll: A trip to Kolkata can never be complete without a taste of its egg rolls. Several fast food stalls sell these wonderful rolls. Every neighborhood has a Roll Center. In fact, one thing you will miss when you leave this place is the limitless choice of rolls that Kolkata offers. 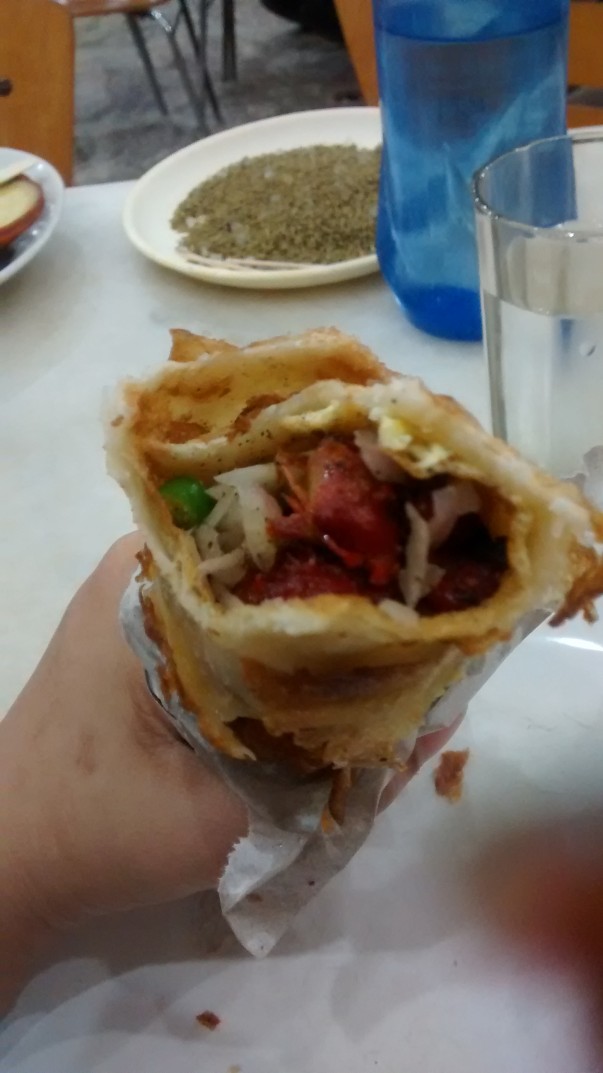 Egg roll - a must have

9. Jilipi: this is the Bengali form of the famous Jalebi of Delhi. The Jilipi is a kind of Indian pretzel made of rice flour or wheat flour and dipped in thick sugar syrup. 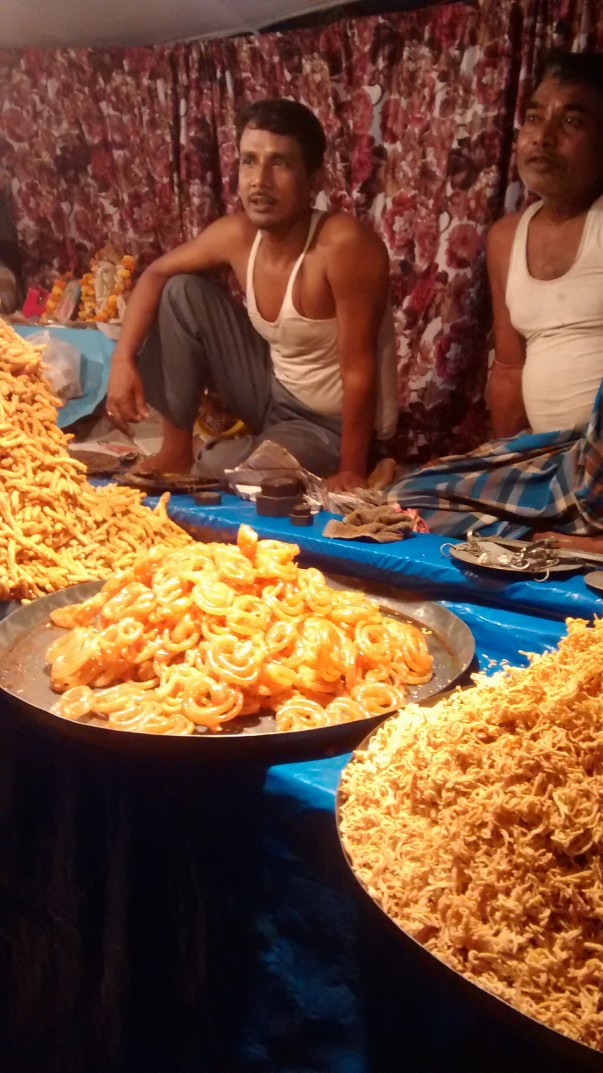 10. Mishti Pan: The Mishti Pan has to come at the end of every good meal. Some lime is spread across a washed betel leaf, the leaf is then filled with juliennes of betel nuts, cardamom, anise, katha. It is then rolled into a triangular shape and secured with a clove. Tiny kiosks selling cigarettes also sell these pans. 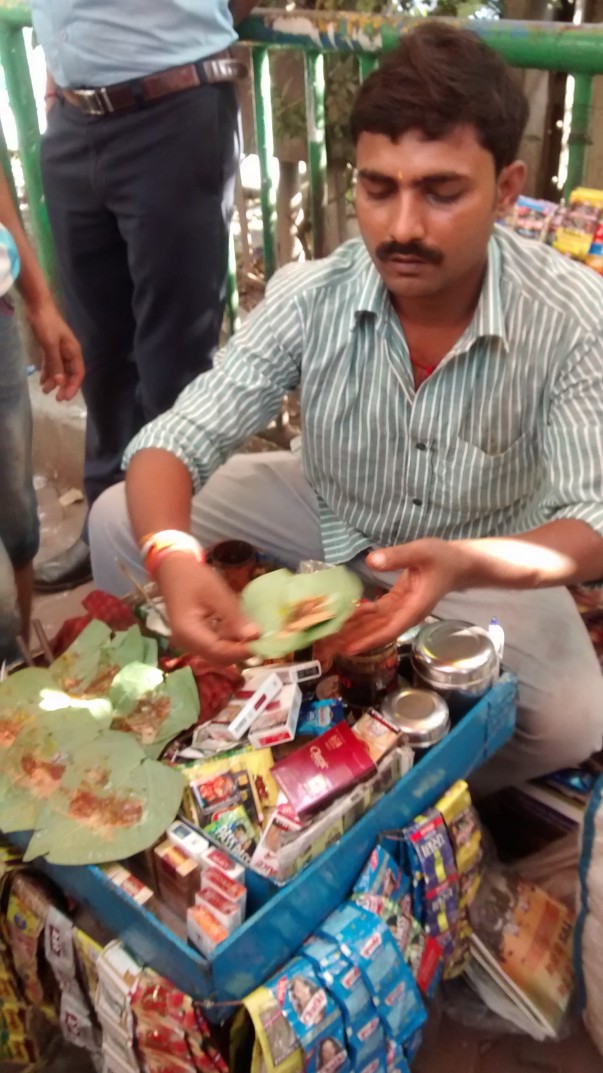 Dinner ends with a Mishti Paan