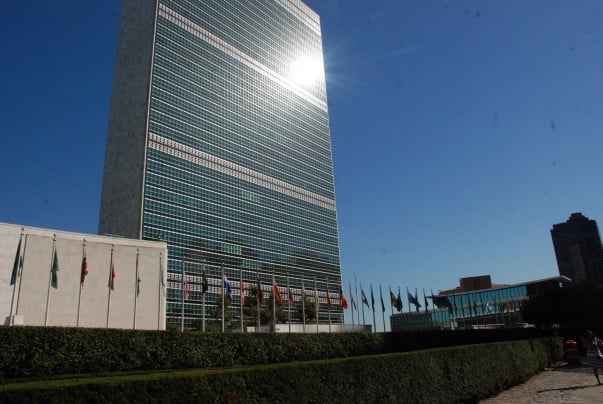 From a slaughterhouse to a house of peace, this piece of ground has seen what a mess our world is. The minute you step inside the UN complex you are technically not on US soil, this vast complex and other UN buildings in its neighborhood are extraterritorial. For a layman it is all New York. Yes, these grounds have seen a slaughterhouse before they were donated by the Rockefeller family to the city and eventually handed over to the UN. This magnificent international headquarters of the UN are the seat of the UN General Assembly and the UN Security Council.

Walking here is like meeting a microcosm of our world within a few minutes. I considered myself fortunate when I could get inside the complex as a visitor and walk around absorbing what all goes to keep fighting countries still meeting and talking. The highlight of my visit, of course, the complex and its character, but closely following this was its food. I enjoyed a few varieties of fish on offer during lunch time. The UN conducts study tours and hour-long walks; you need to plan in advance and like all touristy stuff they culminate at the UN store where you can buy souvenirs and memorabilia. Of course, I bought a set of shot glasses to add to my collection.

When I was walking through this complex the question which was coming back to me again and again was  - Is the UN serving its purpose? Once back at my desk in India we worked as a team and produced an infographic on the UN and asked the same question to our growing user base. Here is the question - Has the United Nations failed?  http://www.mapsofworld.com/poll/has-the-united-nations-failed-facts-infographic.html