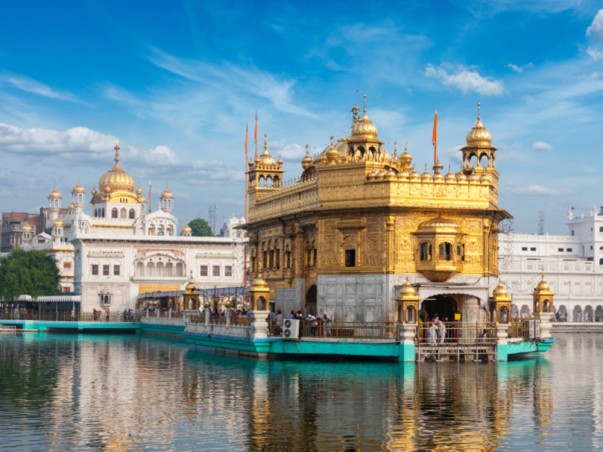 The Golden Temple in Amritsar, Punjab

The Golden Temple is a religious shrine that symbolizes the historical traditions and spirituality of the Punjabis and Sikhs living all over the world. Located in Amritsar in Punjab in the northern part of India, the temple is also known as Sri Harmandir Sahib, literally meaning the ‘Temple of God’. This name reflects the fact that this holy shrine believes in the oneness of God. In a country where each of its regions has a diverse culture, religion and number of gods, the Golden Temple signifies that despite all diversity everyone is welcome to interact with the Almighty irrespective of religion, caste, region, or creed. It is therefore open from all four cardinal directions allowing people to enter from all sides.

The Golden Temple stands amidst a large holy water tank. This man-made tank is popularly known as Amrit Sarovar, literally meaning a ‘Pool of Holy Nectar’. According to historical evidences, the city that grew around this artificial lake came to be known as Amritsar, derived from the name of the lake. This holy lake has immense spiritual significance for the worshippers.

The magnificent gold-coated building of Sri Harmandir Sahib, which incidentally gave it the popular name - Golden Temple, shows influences of Hindu and Muslim architecture. According to records, the structure was inspired from the religious shrine near Lahore dedicated to a Sufi saint named Hazrat Mian Mir, who also laid down the cornerstone of Sri Darbar Sahib (another name used for the Golden Temple). The temple’s distinctiveness lies in the fact that it was built below the surface, in a depression, which is contrary to Hindu temples as they are built on an elevated platform. Guru Arjan Dev (the fifth Sikh Guru), who completed the building’s construction (c. 1601), believed in going down the steps to enter the Temple of God. The building of the temple was started by his father-in-law and the fourth Sikh Guru, Guru Ram Das, who is also believed to have led to the enlargement of the holy lake, Amrit Sarovar.

Sri Harmandir Sahib has a fascinating and a rather violent history. An interesting fact is that it was initially constructed without any gold coating. Down the years, the temple experienced a number of attacks by Mughals, Afghans, and even the Indian Army in the 1980's during Operation Blue Star. These left the temple building in need of reconstruction and repairing. During the reign of Maharaja Ranjit Singh, the ruler of Punjab in the early 19th century, the Sri Harmandir Sahib went into a major transformation. The Maharaja commissioned inlaying marble panels on the building façade and gilding them with metal. In the later years, with the increase in the kingdom’s riches the upper two floors and dome were plated with gold, thus making this temple grander and more beautiful.

The Central Sikh Museum is a must-visit for everyone touring the Darbar Sahib. It reflects the history and significance of the Golden Temple through its murals, paintings and art works. These were made by prominent Sikh personalities, including saints, warriors and leaders.

The Guru Granth Sahib is the holy scripture of the Sikhs. This large holy book is a compilation of the renderings of the renowned saints of the time (like Sant Kabir and Surdas) and the Ten Gurus (known as the founders of Sikhism). It was compiled by Guru Arjan Dev and installed for the very first time in this temple. You can spot it on a prominent platform under a jewel-studded canopy on the ground floor in the Main Hall of the Golden Temple.

« Things To Do and See In Bucharest, Romania Bella Roma, Capitola - Restaurant Review »