What are the most Destructive Earthquakes that shook the world? - Answers 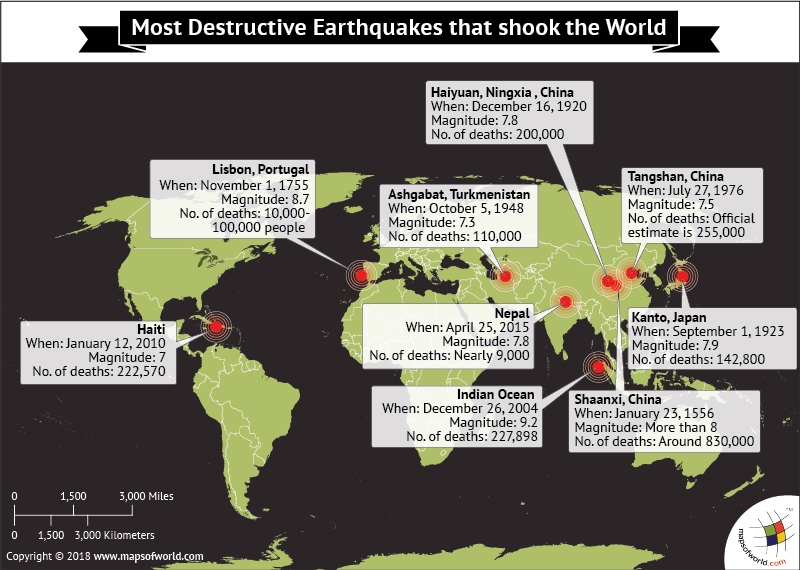 Every year hundreds of earthquakes strike different parts of the earth killing thousands of people and causing massive financial damage. Some of these are insignificant due to their low magnitude or they hit some uninhabited areas, but others are massive and claim thousands of lives. In this list, we will look at the earthquakes which have earned a place in history because of their high magnitude (7 or above), destruction causes, number of deaths or sheer intensity, in chronological order:

This earthquake may have occurred around 460 years ago, when the country was known as “Shensi”, but it is rated as one of the deadliest. The death toll was staggering, and the damages were colossal. It is said that some 500 miles were destroyed. Many of the city walls could not stand the impact and collapsed, while most of the houses were razed to the ground.

This deadly earthquake had almost destroyed the city of Lisbon. The earthquake claimed the lives of almost a quarter of Lisbon’s population. It also resulted in tsunami and fire, and thus, the impact of the earthquake was also felt in the European nations, like northern Italy and France and even in some regions of Africa, making it one of history’s deadliest.

The earthquake caused massive destruction in the Lijunbu-Haiyuan-Ganyanchi area, claiming 73,000 lives in Haiyuan County alone and around 30,000 in Guyuan County. Many houses were destroyed, and numerous landslides occurred.

Often known as the Great Tokyo Earthquake, it badly destroyed the Tokyo-Yokohama area. Apart from the massive casualties, some 381,000 of the 694,000 properties that were located here were either completely or partially destroyed in the earthquake.

Ashgabat and some nearby buildings were badly damaged in Soviet Turkmenistan.  The destruction was not limited to Ashgabat, as damages and casualties were also reported in Darreh Gaz, located in Iran. Rated among the deadliest earthquakes, the quake destroyed buildings and derailed trains.

The damage from the earthquake was so extensive that it was reported even in Beijing, which is located quite far. Despite the damage being huge, the Chinese government had refused international aid.

This was one of the most horrific earthquakes to have struck earth in 21st century. The earthquake, which struck the bottom of the Indian Ocean, released energy equaling some 23,000 atomic bombs. It resulted in devastating tsunami that struck 14 countries in South Asia and Africa. Apart from the huge death toll, the earthquake displaced approximately 1.7 million people.

The most recent massive earthquake to have struck the earth, was the one in Nepal in 2015. The quake flattened buildings and destroyed age-old architecture. The quake triggered an avalanche on Mount Everest, resulting in death of several people.