Who is the biggest trade partner of USA? - Answers 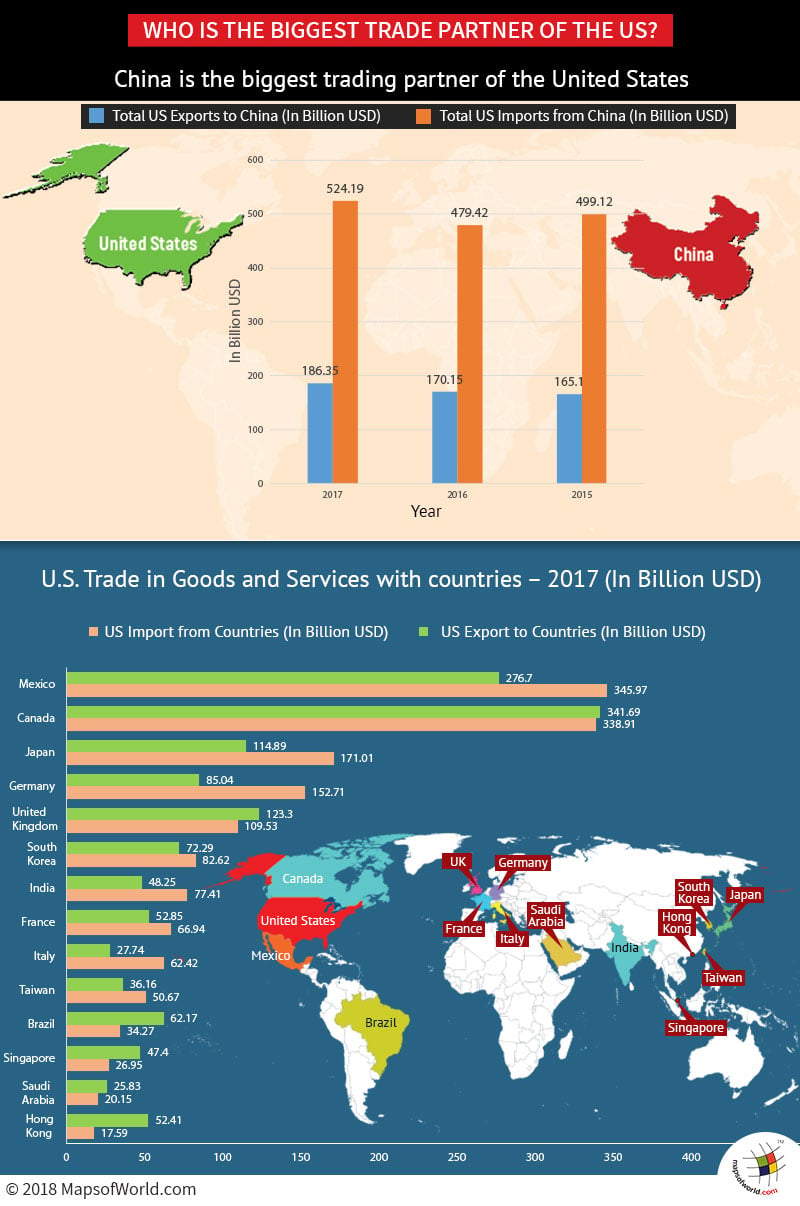 China is the biggest trading partner of the United States.

US President Trump has been accusing China of resorting to unfair trade practices along with subsidizing Chinese manufacturing, which has progressively widened the trade gap in favor of China.

US exports to China have been steadily rising over the years, but the imports from China has grown at a faster rate. In 2015, US exports to China were $165.10 billion; imports $499.12 billion. The balance of trade in favor of China was $334.02 billion.

U.S. Trade in Goods and Services with countries – 2017 (US Dollar billions)

From the chart above, it is clear that the United States is at a disadvantage with most of its largest trading partners with the exception of Canada, UK, Brazil, Singapore, Saudi Arabia and Hong Kong, where it has a trade surplus.

Why does the US import more than it export?

Several factors have resulted in the US losing out its trade competitiveness despite continuing to be an innovator in technology and manufacturing processes.

Despite holding the largest number of product and process patents in the world, the high cost of inputs like raw materials, the high cost of labor, and high taxes has forced US based companies to either locate manufacturing outside the US or have completely outsourced production to other countries.

The biggest beneficiary has been China. Since the late 70s, when China opened its economy, US companies began large-scale sourcing of manufactured goods from China. In many cases, US manufacturers send raw materials to China that gets converted to finished products before being shipped back to the US.

Cheap labor, subsidized input costs, and a controlled Yuan – the Chinese currency, all contribute to the significantly lower cost of manufacturing than the US.

China partially controls the exchange rate of its currency to the US Dollar, and this ensures the cost of manufacturing in China remains low.

Why the United States remains vulnerable in case of a trade dispute with China?

In January 2018, the US debt to China was $1.17 trillion since china has been progressively buying U.S. Treasury notes, making it the largest lender to the U.S. this makes the U.S. economy vulnerable to Chinese manipulation in case of a major trade dispute with China. The U.S. total debt to foreign countries exceeds $20 trillion.

In March 2018, President Trump announced a 25% tariff on steel imports and 10% on aluminum. China is the largest manufacturer of steel in the world, producing over 50% of global production. China is also a major manufacturer of aluminum. The tariffs will certainly hurt China, and so, China announced counter tariffs on several products imported from the US.

Trade stakeholders on both sides and around the world are concerned with the potential fall out and its impact on global markets.

Visit the following to learn more about US & China: