What is the global area of Biotech Crops? - Answers 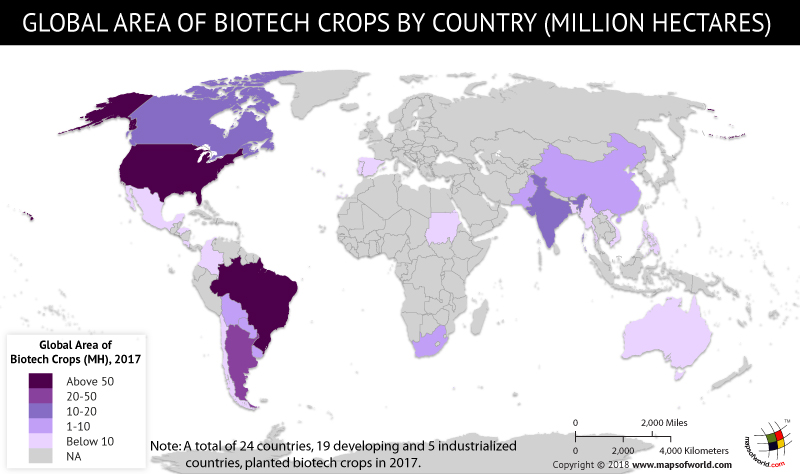 Ever heard about the ‘blue rose?’ It is a commercial biotech flower which grew in Japan in 2017, in an enclosed area. Similarly, different varieties of conventional crops can be produced, owing to the modern advancements. In 2017, almost 17 million farmers in 24 countries planted a whopping 189.8 million hectares of Biotech Crops –advanced crops modified by genetic engineering methods. The world has seen an advancement in technology, which has reached the agricultural sector as well.

In 1996, biotech crops were planted in an area of 1.7 million hectares. After 21 years of its commercialization (1996 to 2017), large-scale plantations exist in both industrial and developing nations. The wide spread use reflects that both small and big farmers have realized the multiple benefits of biotech crops:

• These crops contain desirable traits, including tolerance against some pests and herbicides.
• They also offer numerous environmental benefits, as they require fewer chemical insecticides and highly toxic herbicides, which otherwise pollute the surroundings.
• The reduced exposure to chemicals, in theory means that the food obtained from these crops would be healthier.
• Also, a declined use of machinery and fuel makes the harvesting less expensive, despite the high cost of the seed.

The International Service for the Acquisition of Agri-biotech (ISAAA) extracts data regarding the officially approved plantation of biotech crops around the world. As per the reports, it is the fastest adopted crop technology, in the history of agriculture. 18 countries grew more than 50,000 hectares of biotech crops (also known as biotech mega-countries), and most of them were developing countries from Latin America, Asia, and Africa.
According to a data by ISAAA in 2017, the United States topped the list in the plantation of biotech crops, with an area of 75 million hectares. Brazil is second with the area of 50.2 million hectares.

The other biotech mega-countries with more than 10 million hectares of land are Argentina, India, and Canada. In the years to come, there is a high possibility of substantial expansion in the genetically modified crops in many more countries.

The table below would provide you a detailed figure of the area of biotech crops per country in 2017.