What are the popular places to visit in Orlando? - Answers

Orlando is where the fruits of Disney’s American dream ripened, and faithful recreations of storybook characters run amok. Countless golf courses, retirement communities, and cultural diversity are cocooned in here. Scores of travelers – be it on vocation or vacation – flock ‘The City Beautiful’ to unplug from their routine or to be swayed by many other virtues beyond Orlando’s enthralling theme parks. Wildlife-packed nature preserves, sun-drenched beaches, ultra-hip dance clubs, and history-filled attractions lie within an hour’s drive.

Located in central Florida in the southeastern United States, Orlando is the county seat of Orange County, Florida. It lies roughly 236 miles northwest of Miami and 85 miles northeast of Tampa. 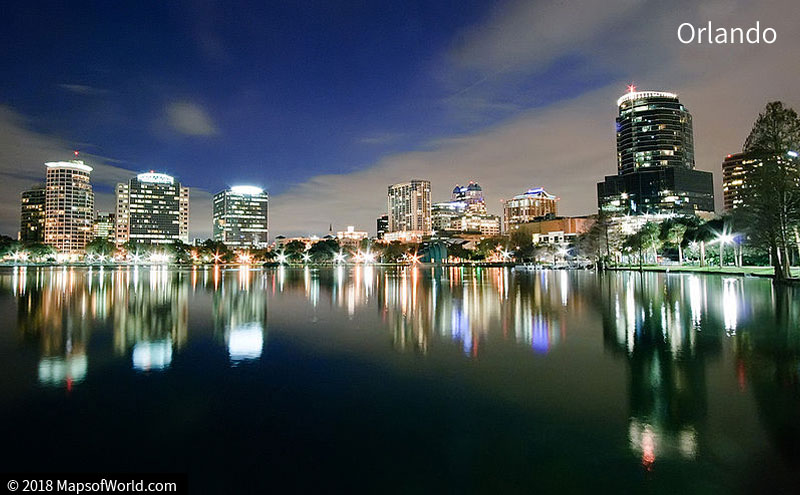 Places to Visit in Orlando

It would take an average traveler more than two months to experience all the attractions, here are some:

Theme Parks – If Dorothy had ever visited Florida, she’d have said, “There is no place like Greater Orlando.” Billed as the ‘Theme Park Capital of the World,’ the region can entertain people of all ages for days on end. An epicenter of fun and excitement, the Walt Disney World comprises four theme parks in its complex: Magic Kingdom, Disney’s Animal Kingdom, Disney’s Hollywood Studios, and Epcot.

When you’re done playing with Disney characters, transport yourself to Hogwarts and meet the world’s most famous boy wizard at The Wizarding World of Harry Potter. For those creative at heart, Legoland is packed with interactive rides and several shows.

Water Parks – Aquatica is a popular destination for tourists and locals alike who want to hit the water and have fun on some adventure filled slides and watch dolphins ‘at home.’ Or take it one step further at Discovery Cove by actually swimming with dolphins. And if your mood is tilting towards some offbeat adventure, get the thrill of high-speed rides at Universal’s Volcano Bay which is a the 200-foot conical mountain that roars and emits lava-esque fluid periodically.

Brevard Zoo – Located near I-95 in Melbourne, the zoo is home to more than 650 animals of 165 species. Covering an area of 75 acres, visitors can feed giraffes in this zoo, take a train ride, face off with a Rhino, or go kayaking. For a true wildlife experience, head to Gatorland – located along Orange Blossom Trail – that features thousands of crocodiles and alligators. Take a self-guided swamp walk, zip across Alligator Breeding Marsh, or wrestle with a juvenile alligator.

Universal Orlando, Kennedy Space Center, SEA LIFE Orlando Aquarium, Crayola Experience, Bok Tower Gardens, and Basilica of the National Shrine of Mary are other attractions not to be overlooked.

Things to Do in Orlando

Few destinations in the world can rival Orlando with incredible year-round recreational offerings. With a multitude of outdoor activities like swimming, boating, water skiing, and fishing; and from rodeo performances to ethnic festivals and art shows, the city has a lot of things going for it.

International Drive – This 11-mile-long thoroughfare is Orlando’s answer to Las Vegas Strip. It is the central nerve of all the action. Rejoice at panoramic views of the city from the 400-ft-tall Orlando Eye, dance your blues away at B.B. King’s Blues Club, sing old classics at Howl at the Moon, and enjoy a family dinner show with swordplay at Pirate’s Dinner Adventure.

Other Activities – Paddle a swan boat in Lake Eola Park, exercise your muscles on a kayak through cypress-lined Shingle Creek, catch a game on the home court of Orlando Magic, take a breath of fresh air in Harry P. Leu Gardens, practice your back-swing, follow-through in a premier golf course, or enjoy an exotic spa treatment for an ultimate respite.

Shopping – From Tiffany diamonds to OP flip-flops and second-hand treasures plus everything in between, the city is a Mecca for shoppers. For budget-conscious buyers, farmers market in Kissimmee sell merchandise with discounts on local fruits. Swing by Church Street Market to spend your dollars and feed your senses. Those having a green thumb will like the selections at the Sunday Eola Market held every week.

Nightlife – Miami is not the only city in the Sunshine State with thriving nightlife; party scene in Orlando heats up once the sun sets. ICEBAR is the best remedy for the sweltering heat, Olde64 keeps the things hot and happening with beer and a lively atmosphere.

Festivals – The city is famous for The Epcot International Food and Wine Festival which runs from late September through November. Other events like Winter Park Bach Festival, Florida Film Festival, Orlando International Fringe Theater Festival, and Florida Citrus Parade are worth attending.

The city can be oppressively hot and rainy weather in May through October, but is quite pleasant from November through April. The ideal time to visit Orlando is from January to April or early fall in September when the crowd thins out.

Such is the scale of Orlando’s culinary scene, that it would take nearly five years to eat at all the restaurants. Be it a casual meal on-the-run or a lavish four-course affair, the city surely satisfies one’s palate. While The Ravenous Pig, Cress, and The Rusty Spoon satisfy every taste bud, Harry and Larry’s Bar-B-Que, Graffiti Junktion, Seasons 52, Raglan Road are places where empty tables are hard to come by.