What are the popular places to visit in Salvador? - Answers

Nicknamed Roma Negra (Black Rome), Salvador or Salvador da Bahia is the capital of Bahia state in northeastern Brazil. It is considered the heart of the agricultural and industrial maritime district – Reconcavo. Founded as the first capital of Brazil by the Portuguese in 1549, the metropolis is one of the oldest New World colonies in the Americas. Whether it is pedestrian-only promenades in Barra or gold-laden churches in Pelourinho, magic – in some form – happens in Salvador every day.

Bathed by the Atlantic Ocean and the Bay of All Saints (Brazil’s largest bay), the city lies on a triangular peninsula. The Baroque poet Gregório de Matos, Romantic poet Castro Alves, and the city’s favorite writer Jorge Amado have done their part to make Salvador an epicenter of Brazilian arts and culture. The city is also the birthplace of the supermodel and Victoria’s Secret Angel, Adriana Lima. 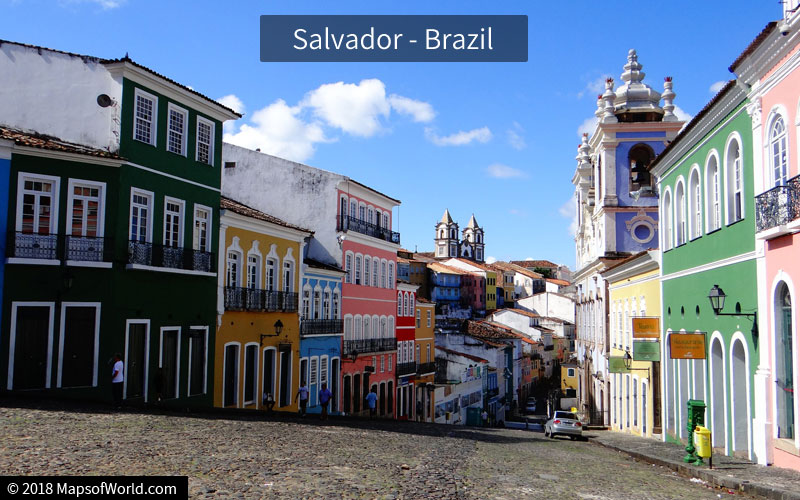 Places to Visit in Salvador

Historic Landmarks – The Historic Center, locally known as Pelourinho, is a UNESCO World Heritage Site since 1985. Take a stroll along this colorful old town to see an intoxicating fusion of Afro-Brazilian culture, heritage, and history. Although the city is called the fount of Candomblé religion, Catholic churches are ubiquitous. Saunter along the famous Rua Chile to the Municipal Square and the Rio Branco Palace to take in the architectural delights.

The 16th-century Cathedral-Basilica of Salvador, the 18th-century Church of Nosso Senhor do Bonfim, Barra Lighthouse near a 16th-century fortress, and the 19th-century Elevador Lacerda (Brazil’s first elevator) are major tourist attractions in Salvador.

Beaches – Order up caipirinhas (a national cocktail of Brazil) and like Jimmy Buffett, have only one worry on your mind: the waves of Atlantic may wet your feet. The Linha Verde region, to the north, is a tropical paradise. The west-facing tropical splendor of Porto da Barra beach in Barra neighborhood is continuously ranked among the best beaches in the world.

Shopping and Dining – The Model Market (Mercado Modelo) near the base of the famous elevator in Old Town is among the biggest handicraft markets in Brazil. Browse for leather goods, wooden carvings, hammocks, jewelry, soccer T-shirts, and more.

Seafood and coconut juice rule the culinary scene, while street food (prepared with African or native style) is found mostly in beach neighborhoods of Rio Vermelho and Barra.

There’s no denying the fact that Brazilians know how to party. The Bahian Carnival is arguably the largest party on the planet. Salvadorans and parade performers from all over Brazil hit the streets and do the Samba (and martial arts) to the rhythmic drum beats for an entire week.