What are some of the most popular places to visit in Norfolk Island? - Answers 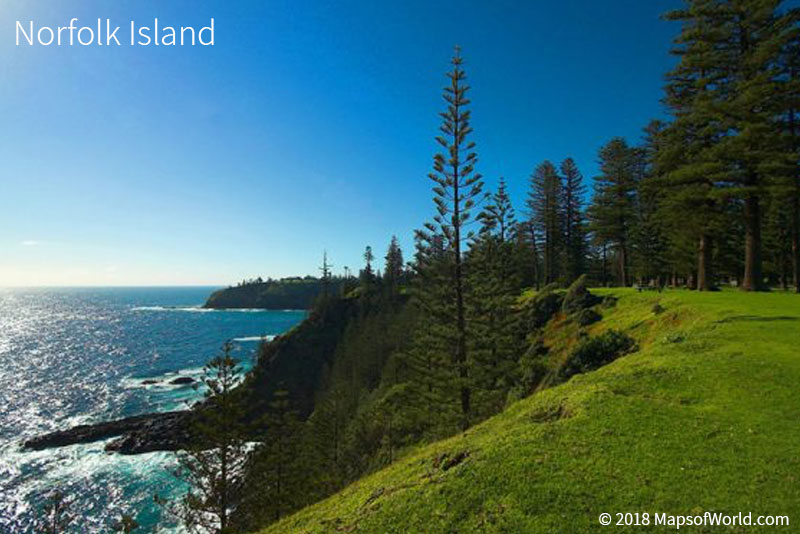 Norfolk Island is a beautiful tiny island located in the east of Australia. It is known for vistas of jagged cliffs and pine trees. The economy is predominantly driven by tourism. Kingston is the capital of Norfolk Island. It is the second-oldest town in Australia and is known for its great cultural heritage and historical significance. Christianity is the dominant religion in the Islands and the majority of the population adheres to Protestantism.

Places to Visit in Norfolk Island

One of the most important places to visit here, the Norfolk Island Museum is a treasure trove of the historical and the architectural heritage of the country. It is situated in Kingston, which is considered to be a chief archaeological site in Australia. This region in Australia houses some of the finest examples of early colonial architecture that are evident in the offices, cemeteries, stores, barracks and the museums.

Standing in humble testimony to the Polynesian settlements on the island, the Norfolk Island Museum exhibit antiques of archaeological importance that date back to the period of settlement. Further, evidence can also be found of the advent of the Europeans in the year 1788. A trail down the Norfolk Island Museum complex also provides evidence of the settlement of the Sydney Cove, which was established by a party of soldiers and convicts.

Some of the other Museums in the island are the Commissariat store, Pier Store and the House Museum situated in the No. 10 Quality row-all of which exhibit evidence of the earlier settlements on the island. Providing an insight into the history and the early culture of the island, the Norfolk Island Museums prove to be an intricate part of the Island’s cultural heritage.

Administered on the lines of Environment Protection and Biodiversity Conservation Act (1999) and the National Parks and Wildlife Conservation Act (1975), the Norfolk Island Botanic Gardens was set up by the joint efforts of the Norfolk Island and Commonwealth Governments in 1986. This particular step was taken to preserve the biodiversity in the flora and the fauna of the island. Having an expanse of 5.5 hectares as of in 1993, this garden is home to some of the unique plant life on the island that prove to be an important resource for research and botanical study.

Adorned with myriads of flowers and plants of different hue and color, the Norfolk Island Botanic Gardens attains a majestic grandeur. A stroll through the rich green regalia of plants and shrubs in the Norfolk Island Botanic Gardens could also provide an insight into the variety of birds that can be found here. The pandemonium of bird calls seems to have a soothing effect on the six senses.

Some of the birds that can be found in Norfolk Island Botanic Gardens are the fantail and the golden whistler. Norfolk Island Botanic Gardens Flora comprise the giant Norfolk island pine and creepers, lianas and shrubs. Some of the flowering plants that enhance the beauty of the botanical garden include different varieties of Acanthaceae, Aizoaceae, Apiaceae, Apocynaceae, Asteraceae, and Basellaceae.

One of the most important places to visit in Norfolk Island, the sight of the green resplendence in Norfolk Island Botanic Gardens is rather rejuvenating and proves to have a lasting effect on memory.

Historic walk in the island begins ideally from Burnt Pine and stretches to Country Road along Peter’s Highway, popularly called Ferny Lane. The road leads to Longridge House, a well-known eatery famous for its Devonshire tea. The Country Road also leads to Watermill Dam. Subsequently, the walk continues down Jemima Robinson Avenue which is lined with 100 pine trees to commemorate the years lived by Madam Robinson.

This avenue leads to the Commissariat Store and the Pier Street jetty where the first Pitcaimers arrived in 1856. Near the jetty is the Royal Engineers’ Office. It is located in Kingston town, which still boasts of 19th-century ambiance with masons, blacksmiths, bakers, tailors, and cloth makers.

Near the Royal Engineers’ Office is the Pier Store, pentagonal prison and the Crankmill. The Sirius Museum and Slaughter Bay are also very close. A tourist can walk down to the Salt Mill and Point Hunter tip around Emily Bay.

Comprising the only residential museum of its kind known as the House Museum, the Norfolk Island’s Quality Row is one of the most important places to visit in Norfolk Island. Significant because of its architectural value, the House Museum was built in the year 1844. Constructed along the lines of the second settlement of Georgian architecture, the museum is a splendid example of the ancient cultural heritage of the country. Thomas Seller was considered to be the first occupant of the house who also had the responsibility of overseeing the construction of the houses along No.10 Quality Row in Norfolk Island.

The Officers’ Bath is another remarkable contribution of the Second Settlement in Norfolk Island. The bath is an underground passage with a domed ceiling made of stone. Fresh water from a dammed creek located in the Soldiers’ Gully, flows through the conduit to the Officers’ Bath. The fresh water then passes below the Quality Row and cascades into the stream, which flows through the Common into the Emily Bay. Stone masons were brought from England to build this stone bath.

St Barnabas Chapel is one of the traditional buildings which is considered as an important place to visit in Norfolk Island. Dr. Robert Codrington laid the first stone for St Barnabas Chapel in the island in the year of 1875. The Chapel was designed and built by Sir Thomas Graham Jackson of London. The time taken for the completion of the construction was just five years.