What are the levels of English Proficiency around the world? - Answers 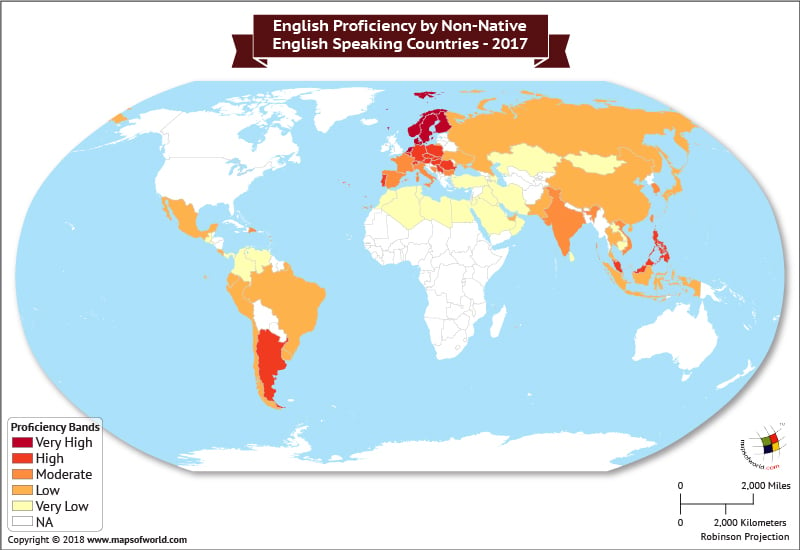 We all know that English is a widely spoken language, but the level of proficiency ranges around the world.

Millions of people have English as their first language, but over a billion people speak it as their second, third or fourth language. Australia, Canada, New Zealand, Ireland, United Kingdom and the US contribute to the large population of native speakers. Former British Crown colonies in Asia, Africa and the Caribbean add more English speakers to this pool. However, among countries where it is not the first language, the level of English proficiency can vary from country-to-country.

To analyze the average level of English language skills among non-English speaking nations, EF Education First publishes the EF English Proficiency Index, which is a ranking of English skills by country. The most recent was seventh index of EF English Proficiency Index, released in November 2017, and again, just like the Index of 2016, Netherlands topped the list. The nation had a score of 71.45 in 2016. Barring Singapore, the other countries with very high English proficiency were European nations, including; Denmark, Sweden, Norway, Finland, and Luxembourg.

Many countries on the list of English proficiency are listed as ‘low,’ or ‘very low.’ Some nations listed as ‘low,’ include; Russia, Japan, China, Brazil, Pakistan, for example. Thailand has jumped up on the proficiency level form ‘Very low,’ to ‘Low’. On the other hand, Morocco has ‘Very low’ proficiency, although it was ‘low’ last year. Other nations listed at ‘very low’ include; Turkey, Sri Lanka, Qatar, Iran, Oman, Kuwait, Mongolia, Saudi Arabia, and others.

The table below provides information on the levels of English proficiency around the world for the year 2017.