Is Italy the food capital of the World? - Answers 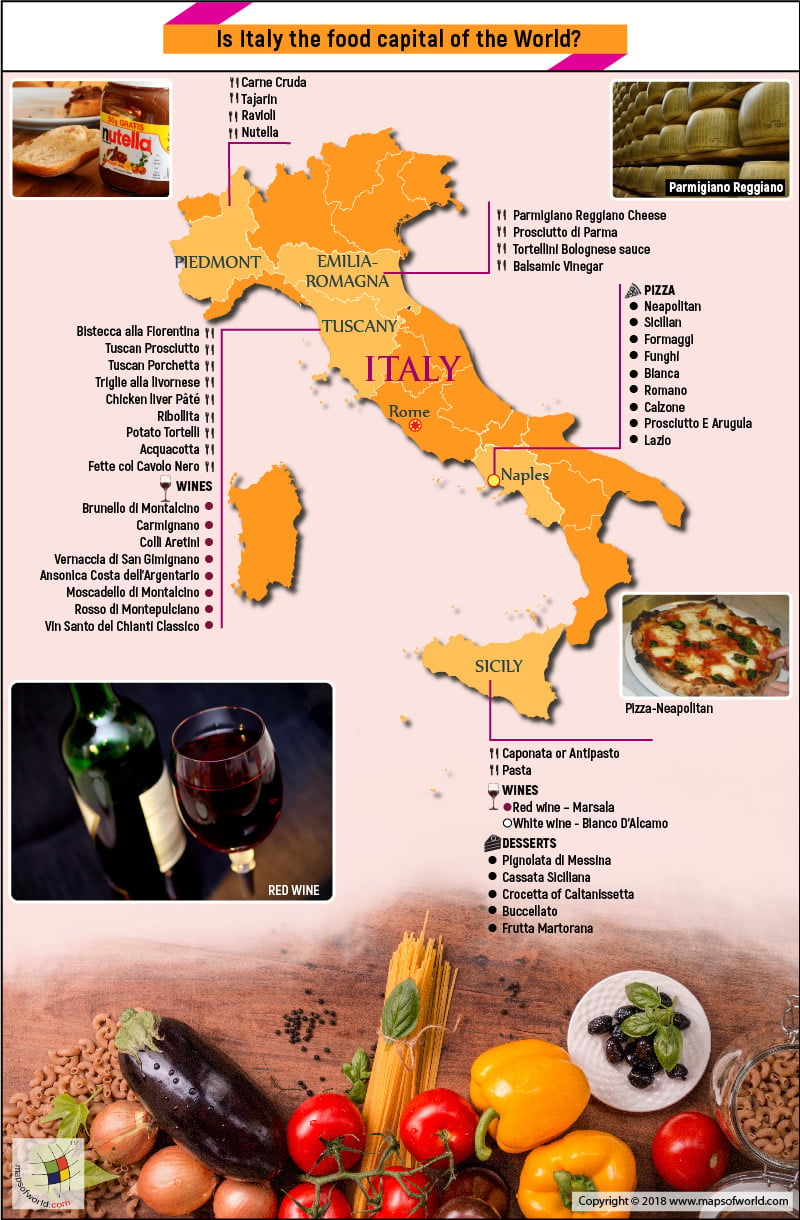 Yes, Italy can claim to be the food capital of the world. The country’s culinary tradition is as old and unique as its history and culture, and food and wine play an important part of that unique Italian experience.

Over time, all twenty regions of Italy have evolved their own special identity of foods with their versions of ingredients and toppings that identifies with the region. Italian food comprising of a range of salads, pasta, pizza, gelato, and wines, are now popular in many parts of the world. Each region of Italy has built a reputation for their special variety and stoutly defend their claim of being the best.

A good example of the most popular Italian food worldwide is Pizza. While the origins of the pizza trace back to the 3rd Century B.C., the port city of Naples stakes the claim for opening the first pizzeria in 1738 – Antica Pizzeria Port’Alba.
The most popular pizza is the Pizza Napoletana or Neapolitan pizza. It comes in two popular varieties – Marinara and Margherita. The Italians are extremely proud of their pizzas and differentiate between the two based on their ingredients and toppings. Marinara has tomatoes, garlic, and oregano toppings, while Margherita has fresh mozzarella (made from buffalo milk), tomato, basil, salt and topped with extra virgin olive oil. Other forms of the pizza are the Sicilian, Formaggi, Funghi, Bianca, Romano, Calzone, Proscuitto E Arugola, Lazio, among many other varieties.

The Emilia-Romagna region has built its culinary reputation over some very popular food specialties – the Parmigiano Reggiano cheese, prosciutto di Parma (a dry-cured ham), Tortellini Bolognese sauce and balsamic vinegar. People of this region love their meats and have evolved their traditional way of curing meats. While pizza originated from the south of Italy, Tortellini – a ring-shaped pasta with meat stuffing, came from Bologna and Modena.

This island in the Mediterranean has had people of many cultures arrive and settled over time and therefore, influences of various cultures – French, Greek, and Arab, can be seen in what has evolved as Sicilian food specialties. Thanks to it’s active volcano – Mount Etna, the volcanic soil is nutrient-rich, and so Sicily is blessed with a variety of fruits and vegetables.

The Caponata or antipasti, as the locals call it, makes an excellent starter. Eggplant, garnished with celery and topped out with sweet and sour sauce, is central to Caponata and comes in vegetarian varieties with loads of olives, green bell peppers, pine nuts, or with a range of seafood including lobsters, swordfish, shrimp and grated dried tuna.

Italian main course starts with Pasta, a dish that has Arab origins but became popular mainstream in Sicily before reaching the mainland and then further north. Pasta is served in over 300 shapes, most popular ones being spaghetti, rigatoni, cannelloni penne, fettuccini, fusilli, lasagna, among many others.

The Mediterranean diet is healthy and balances well with a variety of wines, another Sicilian pride. Sicilian red wine – Marsala, and white wine – Bianco D’Alcamo are among several local wines.

Among the most picturesque regions in Italy, Tuscany is popular for its farms that distinct varieties of food and wines. It is the third most planted region in Italy after Sicily and Apulia.

In Tuscany, meat dishes like Bistecca alla Fiorentina – a Tuscan beefsteak, Tuscan prosciutto-thin slices of dry-cured ham, and the Tuscan Porchetta – roasted pork, are all local favorites of meat lovers. Tuscany is also known for its bread. The main course served with a variety of different bread including – fettunta, focaccia, panzanella, crostini, bruschetta, ribollita, among other forms, with a dip of olive oil.

Try out some of these popular local dishes in Tuscany:

Vegetarians can check out:

The Super Tuscans, which include the Bolgheri brand, are DC and DOCG classified wines that give the Tuscan produce its recognition. The Chianti red wine from the Chianti region is famous, with eight million cases produced annually.

This North Italian region is well known for its special beef-based dishes with the most famous being the Carne Cruda – a raw beef dish of thinly sliced slivers with a topping of lemon juice, olive oil, fresh garlic, salt, and pepper. The black or white truffle fine topping makes the Crane Cruda a not-to-miss dish. Follow this up with Tajarin – thin ribbon pasta made with egg yolk and Alba white truffle topping. Piedmont grows the prized Alba white and black truffles that make their way to many of the regions prized dishes. Try the Ravioli stuffed with tender veal or vegetables. Finish your meals with Piedmonts finest and most popular dessert creation – Nutella. This unique hazelnut cocoa spread adds to a wide variety of Piedmont desserts. The range of desserts is amazing.