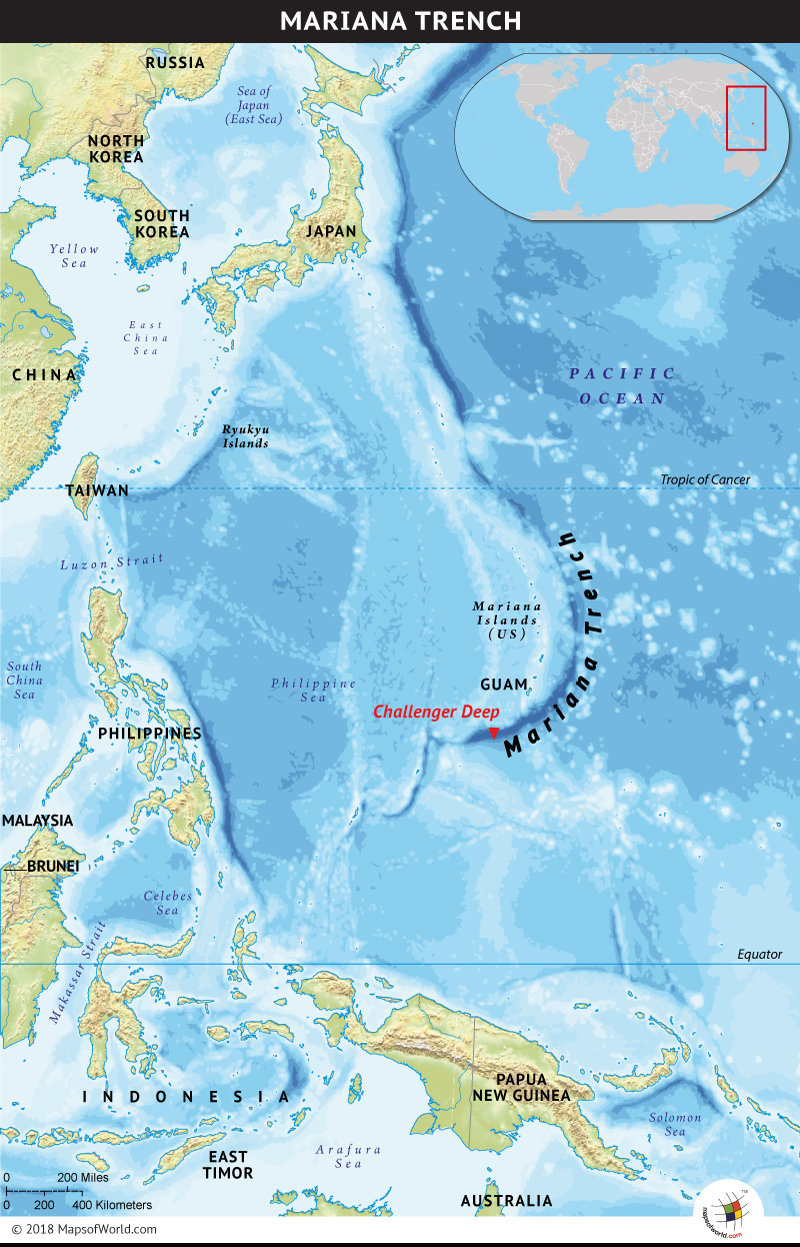 Located in the  Western Pacific Ocean, approximately  124 miles east of the  Mariana Islands,  the Mariana Trench features the deepest natural point in the world. An oceanic trench is a topographical depression in the seafloor, which is relatively narrower in width as compared to its length. The Mariana Trench, is a crescent-shaped trough in the Earth’s crust, averaging about  1,580 miles long and  43 miles wide.  The Trench, at its southern end, also projects a small steep-walled valley, called the  Challenger Deep. It is the deepest known point on the Earth’s seabed, measuring to be  35,814 feet. Situated within the territories of the U.S. dependencies of  Northern Mariana Islands and Guam, the Mariana Trench, was designated a  U.S. National Monument in 2009.

The Trench is a distinctive morphological feature of the ‘convergent plate boundaries,’ also known as the ‘destructive plate boundary,’ along with the lithospheric plate of the Earth. The movement of these plates towards each other leads to the flexing of the subducting slab and further descending beneath another lithospheric slab. The Mariana Trench is part of the  Izu-Bonin-Mariana subduction, which is divided by the two tectonic plates: the Pacific Plate and the  Mariana plate. The Western edge of the Pacific plate is subducted beneath the smaller Western Mariana plate. The Pacific plate is the oldest oceanic crust, possesses cooler and denser crust material. Hence, there exists a great height difference in comparison to the Mariana plate, which is much younger.

Due to its extreme depths, the Trench is cloaked in utter darkness accompanied by extremely low temperatures. The water column above the bottom of the trench, exerts a crushing pressure of almost eight tons per square inch, recording a thousand times more than the standard atmospheric pressure at sea level. Extending so far down, the trench is still not part of the seafloor closest to the center of the Earth. This is owing to the Earth’s spheroid shape. Rather, certain parts of the  Arctic Ocean seabed, are at least 8 miles closer to the Earth’s center, than the Challenger Deep seafloor.

The trench has been an area of curiosity for researchers over time. Yet, the first and the only time humans descended into the Challenger Deep was in 1960. Boarding a U.S. Navy submersible, a bathyscaphe named  Trieste, Jacques Picard, and Navy Lt. Don Walsh reached their goal of exploration. The onboard systems recorded a depth of  37,799 feet, which was later corrected to 35,814 feet. Consequently, attempts were made in similar ways but were unmanned. The ROVs Kaiko in 1996 and Nereus in 2009, recorded similar depths of 35,768 feet and 35, 814 feet respectively.

The most remarkable descent was made by the Canadian film director James Cameron in 2012. He reached the bottom of the Mariana Trench in the submersible vessel named Deepsea Challenger. In the process, he set a new world record depth for a solo descent.

Answering to some fundamental questions and addressing widespread curiosities, the expeditions have helped heed to some of them. The deep-ocean dredges and unmanned subs have given glimpses of large creatures living at the bottom of the Trench:  Flatfish and Shrimp.  According to Picard, “the bottom appeared light and clear, a waste of firm diatomaceous zone.” On the other hand, marine biologists reflected skeptical views on such sightings. Due to high and extreme pressure conditions, they firmly believe in the nonexistence of calcium, which would hence not sustain any vertebrates. The absence of calcium would imply that the bones of such creatures would simply dissolve. The collections from other explorations have also revealed some gigantic single-celled amoebas inhabiting the Trench. Featuring a size greater than four inches, they are found in abundance on the seafloor and are also hosts to numerous organisms. In 2014, a new species of snailfish was discovered at a depth of 26,772 feet and in 2017 at the depth of 26,800 feet.

Intriguing facts and discoveries of the Trench, have kept mankind hooked on research work. An understanding of the survival and existence of animals and organisms under such unfavorable conditions can lead to breakthroughs in medicines and biotechnology. Additionally, studying rocks and walls of the Trenches, aid in attaining better knowledge of the  Earth’s interiors and tectonic plates-related phenomenon.

The recommendation of making the Trench a site for nuclear waste disposal has faced large criticism across the world. The Trench is seen as a subducting zone, that holds the capacity to eventually push the nuclear waste deep into the Earth’s mantle. Internationally, this act is frowned upon and is prohibited by law, as it may result in unforeseen repercussions, with a long-term impact on mankind.