What countries are most vulnerable to climate risks? - Answers 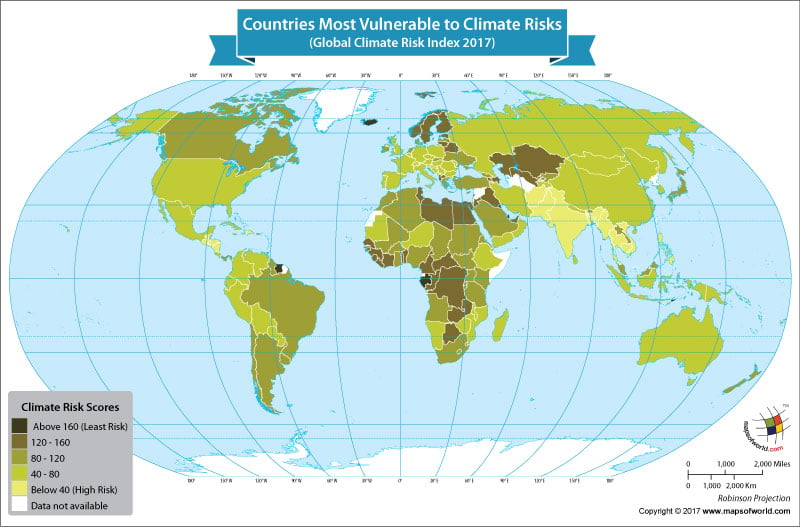 The climate around the globe continues to face grave risks. Continuous increase of temperature, extreme weather phenomenon, crop failure, polar cap melting, and spreading diseases are just a few instances of climate risk. To access to what extent have nations around the world been affected by the consequences of weather-related loss, Germanwatch, a Germany-based independent environmental organization, publishes the Global Climate Risk Index. The index has taken into account data from 2015 and 1996 – 2015.

It has been estimated that between the years 1996 and 2015, losses due to climate risks was rated to be around US$ 3.08 trillion in purchasing power parities. Meanwhile, around 11,000 extreme weather related events have claimed more than 528,000 lives. Among the 10 most affected countries, nine were developing nations. These were placed in the lower-middle income country group. Thailand was the only nation among these worst affected, that is classified as an upper-middle income country.

The Global Climate Risk Index 2017, which is the 12th  edition of the analysis, has rated Honduras, Myanmar and Haiti as the three most affected countries in the 20 year period. Scoring 11.33, 14.17, and 18.17 respectively. While Haiti experienced the devastating Hurricane Sandy in 2012, Hondurans was badly affected by Hurricane Mitch in 1998. Cyclone Nargis ravaged Mynamar in 2008, claiming thousands of lives. The other countries that were most affected and had scores of less than 40 were India, Thailand, Bangladesh, the Philippines, Pakistan, Vietnam and a few others. These nations have suffered huge damages economically and the deaths per 100,000 inhabitants vary from 0.22 to 14.71 from 1996 to 2015.

Countries that scored between 40 and 80 in the Global Climate Risk Index 2017 were Iran, Cuba, Czech Republic, Belgium, Namibia, the United Kingdom, Russia, the United States, Italy and other nations. Countries that are the least affected and rank above 160 on the Global Climate Risk Index 2017 are Timor-Leste, Qatar, Iceland, Singapore, Kuwait, Brunei, Gabon, and Suriname.

To get a better understanding on how the nations stand on the Global Climate Risk Index 2017, refer to the table below.