What are the Places Where Sun Never Sets? - Answers 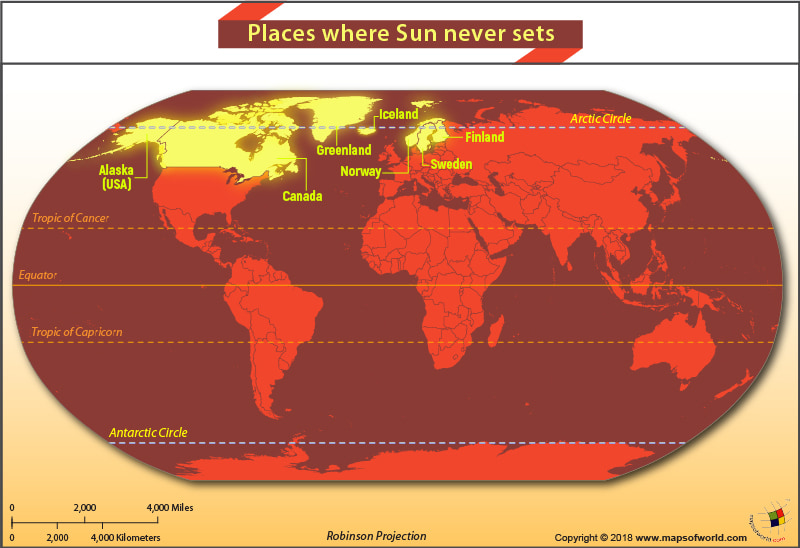 In locations above the Arctic Circle and below the Antarctic Circle a natural phenomenon occurs called polar day and polar night. Polar day occurs due to the earth’s unique tilt at approximately 23 degrees on its axis towards the Sun. During the summer solstice on June 21st, the Sun reaches its highest point in the Northern Hemisphere. The same takes place in the Southern Hemisphere on December 22nd.

On both days, the Sun shines for the maximum period in a day and never fully sets. The extended days of sunlight can last anywhere between 20 to 24 hours for several days or months, based on location. The phenomenon is commonly referred as the Midnight Sun and is visible from places on or north of the Arctic Circle.

The reverse occurs during winter months in both the zones, resulting in extended nights. These are called polar nights.

“Norway, Land of the Midnight Sun” describes Norway’s unique feature due to its location. Part of the Scandinavian Peninsula, parts of Norway lie in the Northern and Eastern Hemispheres. Norway is a country with several lakes, fjords, and rivers. Hammerfest, the northernmost town in Norway, is the best place to watch the Midnight Sun. Visitors to the town can experience extended days in summers where the sun never sets. From fishing to sailing or simply taking extended walks through the night, makes Norway attractive to visitors.

North Atlantic’s second largest island and country, Iceland comprises glaciers, geysers, volcanoes, hot springs, and mountains. Along with Norway, Iceland too is known as the Land of the Midnight Sun. A popular place to see the Midnight Sun is the island of Grimsey. The best times to experience sunlight through an entire 24 hours is between mid-May and mid-August as it remains visible in all parts of Iceland.

Between May to August, the northern parts of Finland have 24 hours of daylight. The low hills and mountains of Lapland are a place where 24-hour daylight adds to activities through the night for visitors. For the Finns, extended days offer opportunities to enjoy the midnight sun and visitors have plenty of options to choose from entertainment to adventure during the summer months.

Greenland is officially part of Denmark but does not share its borders with any country. Located between North America and Europe, Greenland is a large continent-sized island with 80% of its land covered in ice. Large areas above the Arctic Circle experience the Midnight Sun for extended periods but are lesser in areas below the Arctic Circle. Greenland offers a wide variety of guided tours with all kinds of activities including trekking, angling, dog-sled rides, etc.

Sweden is the land of the Northern Lights and the most beautiful place to experience it is the Abisko National Park, where the sun remains clear at midnight for 56 days in a year. Watching the Midnight Sun and the magic of the Northern Lights unfold at different times, is a photographer’s delight. The Aurora Sky Station is set up for catching the Northern Lights. Late May to mid-July is the best time to be there. Jokkmokk is another great place to watch the midnight phenomena. Great times to catch the lights are from early June to early July – 32 days of great viewing.

Inuvik, part of Northwest Territories, lies along the Mackenzie River in the northernmost side of Canada. The town may be small, but it’s the best place to watch the Midnight Sun that remains for 56 days in a year. In the summer months, Inuvik places host to some great festivals that run through the night or day, since its daylight all 24 hours.

During the summer solstice, Fairbanks in Alaska is the best place to be to catch the Midnight Sun. Be it baseball, a round of golf, or joining the fun run, it’s never night during that period, and both locals and visitors make the best of it. The Sun stays up from May 10th to August 2nd.