Where are the Most Colorful Festivals held? - Answers 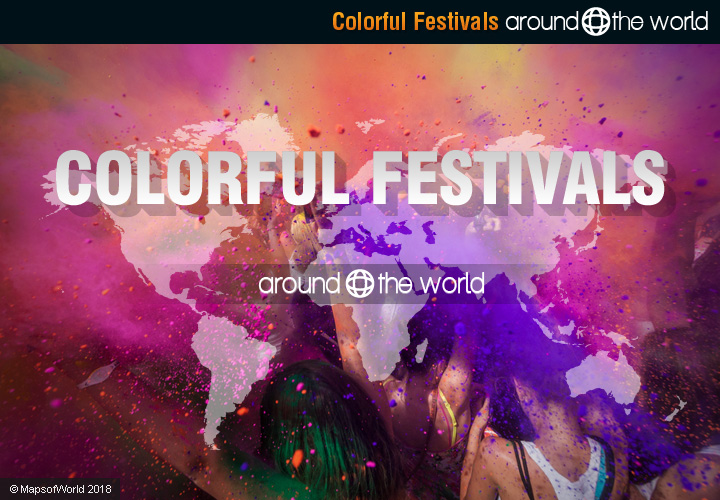 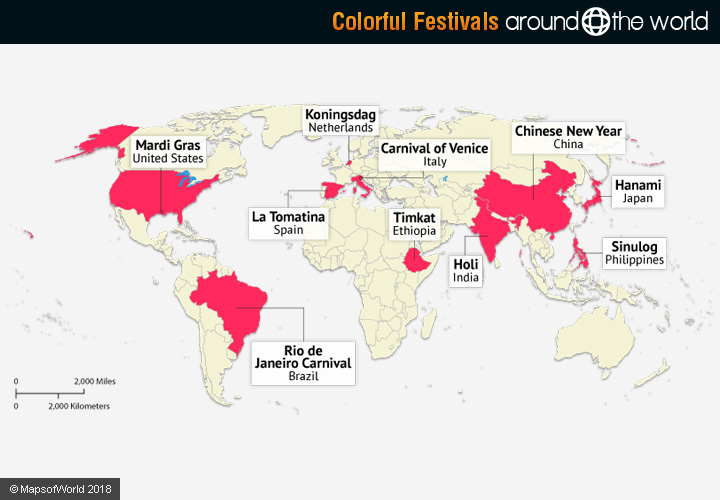 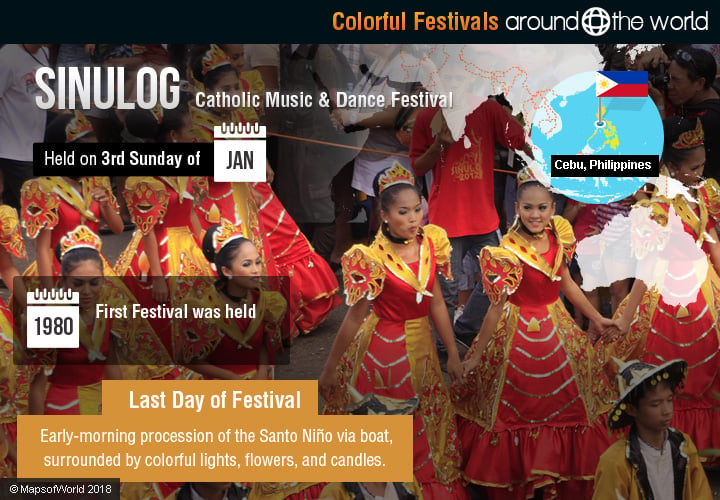 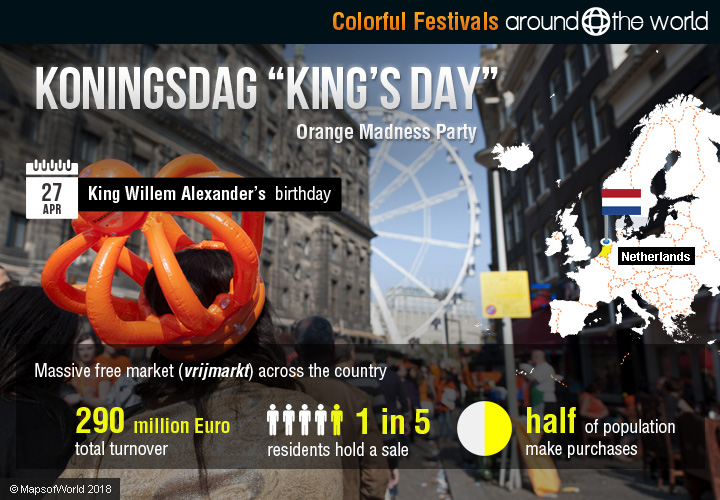 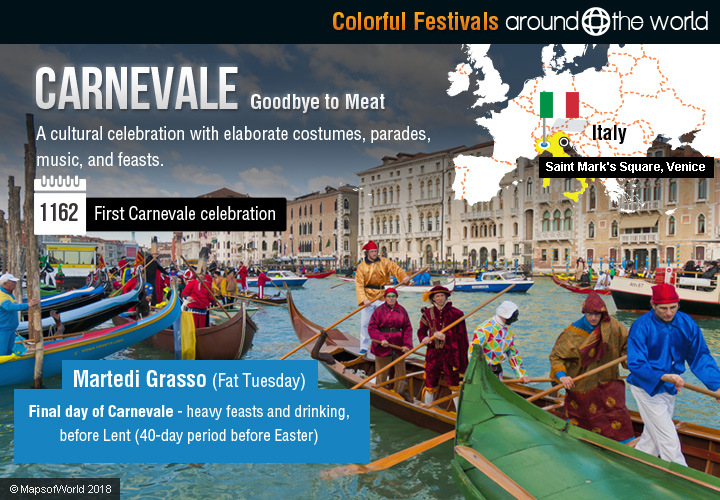 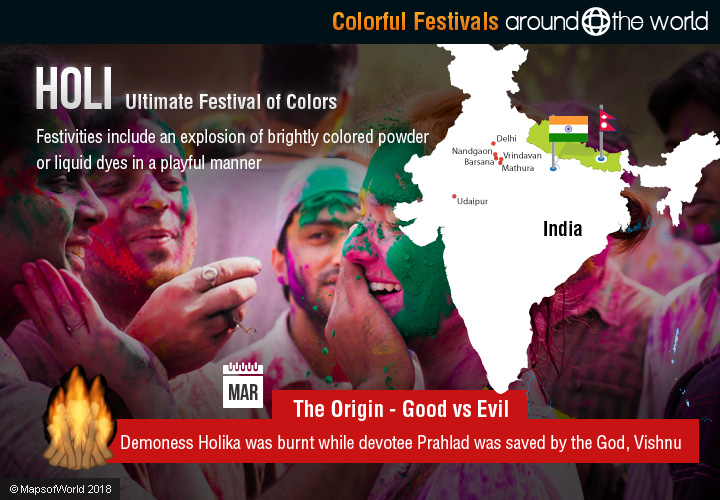 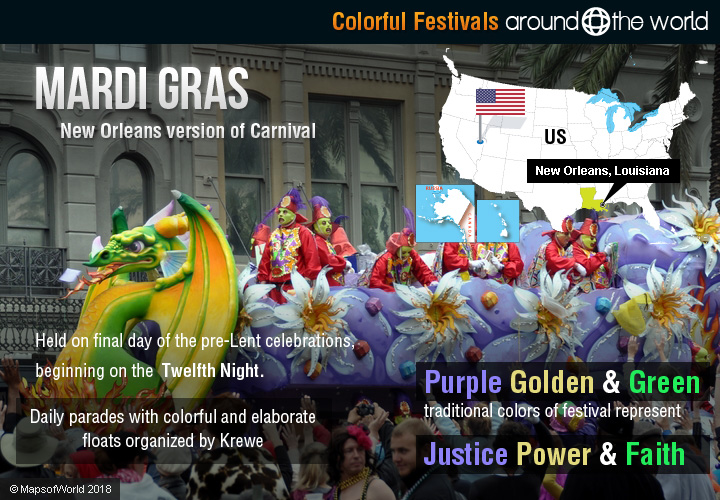 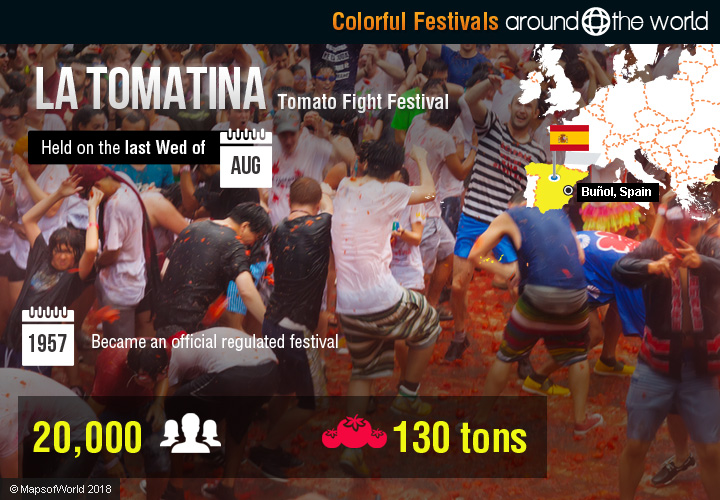 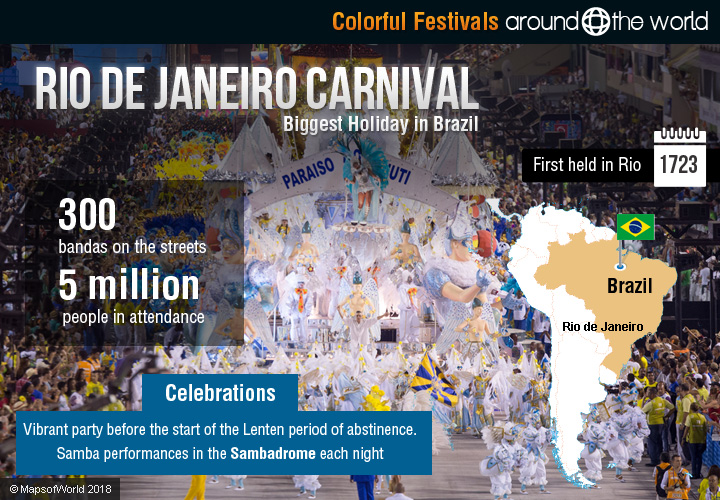 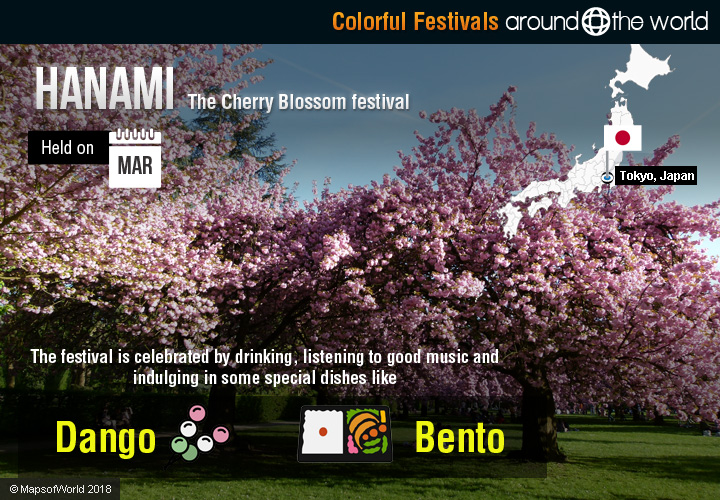 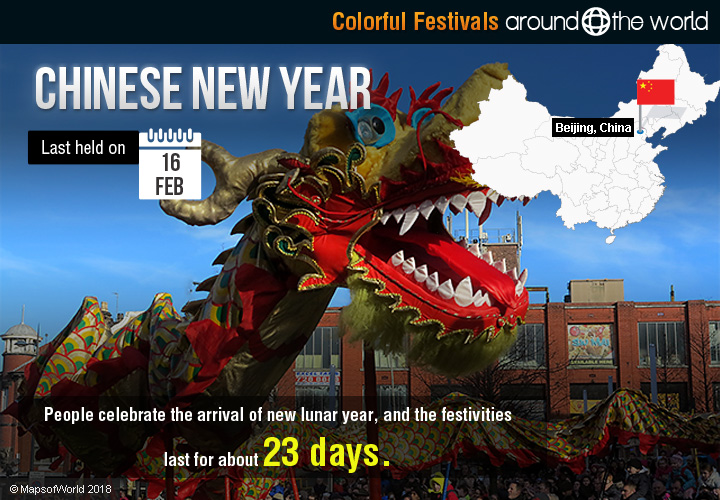 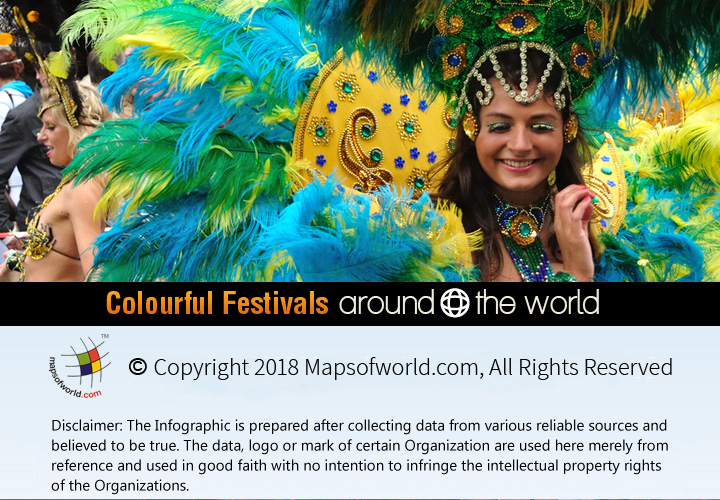 Timkat is an Epiphany festival taking place every year in the country of Ethiopia on January 19. It commemorates the baptism of Christ by John, the Baptist in the River Jordan. In a country that has about 80% Orthodox Christian population, the Timkat, or baptismal ceremony is one of its most important. The festivities last for three days. The best ceremony is in the city of Gonder’s Fasiladas Bath. The festival features ritual ceremonies, including a reenactment of the baptism. In the baptismal ceremony, Christian pilgrims jump into the waters, which have been blessed by the priest.
Following the ceremony, a procession of models of the Ark of the Covenant are colorfully wrapped and set atop the priests’ head, and paraded back to the church. Those involved in the procession are clergymen, who wear colorful and ornately embroidered robes, carry vibrant umbrellas, shining crosses, and images of Mary and Jesus as they dance and sing through the streets from the river to the church. Most of the onlookers wear all white, but the ceremonies are frequently decorated in the Ethiopian colors of red, yellow, and green.

Held on the third Sunday in January in Philippines – Sinulog is a vibrant pagan and Catholic celebration featuring costumes, music, dancing, and a fluvial procession. As a strongly Catholic nation, the ceremony is a nod to the pagan history of the Philippines, and symbolizes their conversion to Catholicism after Spanish colonization. The Sinulog festival is held in Cebu City, and lasts nine days. The main events of the festival takes place on the last days, with an early-morning procession of the Santo Niño via boat, surrounded by colorful lights, flowers, and candles. The statue is brought to the town basilica, where ceremonies take place, after which the procession takes to the streets. The first of these Sinulog festivals was held in 1980, and over the years has become very popular in the country.

Carnival of Venice – Goodbye to Meat

Also known as ‘ Carnevale di Venezia’, the festival was first held in Venice, Italy, in 1162. It emerged as a cultural celebration with elaborate costumes, parades, music, and feasts. The final day of Carnevale takes place on Shrove Tuesday each year. This is a day of feasts and drinking. It is the last day before Lent, a somber 40-day period before Easter in which there are no celebrations or decadent foods, as Christians reflect upon the death and resurrection of Christ. The name Carnevale means “goodbye to meat,” as the celebration ushers in the Lenten season. Carnevale in Venice lasted throughout the Renaissance period but began to die out until it was revitalized in the 1930s as part of the local culture.
Celebrations take place in Saint Mark’s Square, at the heart of Venice, and include a beauty and costume pageant, and a competition for the most beautiful mask. Masks are an important part of Venice’s history and the celebration, and the colorful works of art are decorated in feathers and jewels, and can represent several characters.

French for “Fat Tuesday,” Mardi Gras is the New Orleans version of Carnival, which incorporates the French influences of the city into the pre-Lent celebrations, beginning on the Twelfth Night, January 6th, and especially focused on the two weeks before Ash Wednesday. Traditions of the New Orleans Mardi Gras include daily parades organized by Krewe – who design colorful and elaborate parade floats with various themes. The Krewe ride atop the floats as they travel through the streets and throw plastic beaded necklaces, doubloons, or various other small toys and fun prizes to the people along the route. Celebrations in the French Quarter, particularly on Bourbon Street involve wild parties and more raucous crowds.
Other events of the Mardi Gras celebrations in New Orleans are masquerade balls and king cake parties. Purple, gold, and green are the traditional colors of this festival, which stand for justice, power, and faith respectively, derived from the Catholic tradition.

The ultimate festival of colors, Holi is a Hindu religious celebration marking the arrival of spring. Holi celebrations typically take place in March each year, near the vernal equinox. The festival is celebrated across India (especially the north) and Nepal. Festivities include an explosion of brightly colored powder or liquid dyes in a playful no-holds-barred public fight, resulting in crowds coated in rainbows of color. The origins of the celebration lie in the Hindu legend of Holika, a story of good versus evil, in which the demoness Holika is burned, while devotee Prahlad is saved by the God, Vishnu. Holi celebrations include bonfires to ward off evil.
Major Holi celebrations take place in the City Palace in Udaipur, Delhi, and especially towns in Uttar Pradesh, which is known for being home to Krishna. Here festivities are held in Mathura, Nandgaon, Vrindavan, and Barsana.

Koningsdag, or King’s Day, is the national holiday of the Netherlands, commemorating the birthday of the King Willem Alexander on April 27. The celebration was formerly known as Queen’s Day from 1885 to 2013, until it ended with the abdication of Queen Beatrix. It is held in cities across the country and is known for its massive free market (vrijmarkt), in which anyone can sell used items, and children frequently sell their toys. The average turnover in free market goes about 290 million Euro.
King’s Day and Night feature the country’s biggest celebrations, in which the partygoers are decked out in orange, representing the Royal House of Orange, in what is known as “orange madness” (oranjegekte). People are dressed in orange outfits, have orange dyed hair and relish on plenty of orange food and drinks. Amsterdam’s celebrations are the country’s largest, with close to 2 million attendees, and feature parties and family fun along the canals.

One of the most famous colorful festivals is La Tomatina. It is a unique celebration, held on the last Wednesday of August each year, in the town of Buñol, Valencia, Spain. The festival likely got its start in 1945, at a parade in which those watching the parade began to throw tomatoes at the procession. Though police officers at the parade attempted to stop tomato throwers, however the people persisted and La Tomatina became an officially regulated festival in 1957. The festival begins with a competition to climb the palo jabón, a greased pole topped with ham. Once the ham is knocked off the pole, a massive tomato fight begins. On an average, the event witnesses about 20,000 people, and use of about 130 tons of tomatoes.

Rio de Janeiro Carnival – The biggest show in on Earth

The month of February or March, witnesses one of the biggest carnivals in the world. Rio de Janiero Carnival is a celebration held in Brazil each year, and lasts for 6 days. It receives an average attendance of about 2 million people per day. Entailing the culture of both Portugal and Africa, the event observes diverse food and music. The festival dates back to 1723, and in 1920s it attained a new look with the introduction of samba schools. Now the colorful and fun parades with the samba schools is the limelight of Rio de Carnival. Street parties running parallel to the parades add the charm to the festival.

The Japanese traditional custom – Hanami held during springs to enjoy the beauty of flowers of the plum or cherry trees. The people of Japan gather around the blossomed cherry trees and through parties with friends, coworkers or family. It is often also held in the night, especially in cities like Tokyo. Only in the beginning of each year, a forecast of ‘cherry blossom front’ is announced, and people patiently wait for the days. The festival is celebrated by drinking, listening to good music and indulging in some special dishes like dango and bento. The festival is often celebrated in other countries like USA, Finland, and Italy.

Rainbow-hued dragon dances, illuminated homes and strings of red paper lanterns are a common observance of Chinese New Year. People celebrate the arrival of new lunar year, and the festivities last for about 23 days. The festival is a major holiday in Greater China, and witnesses large annual mass gathering of people from around the world. The festival however originated to pray for successful plantations and good harvest. Colorful firecrackers are set off in the midnight all around the country.