Why Radcliffe Line Is called the bloody line - Partition of India 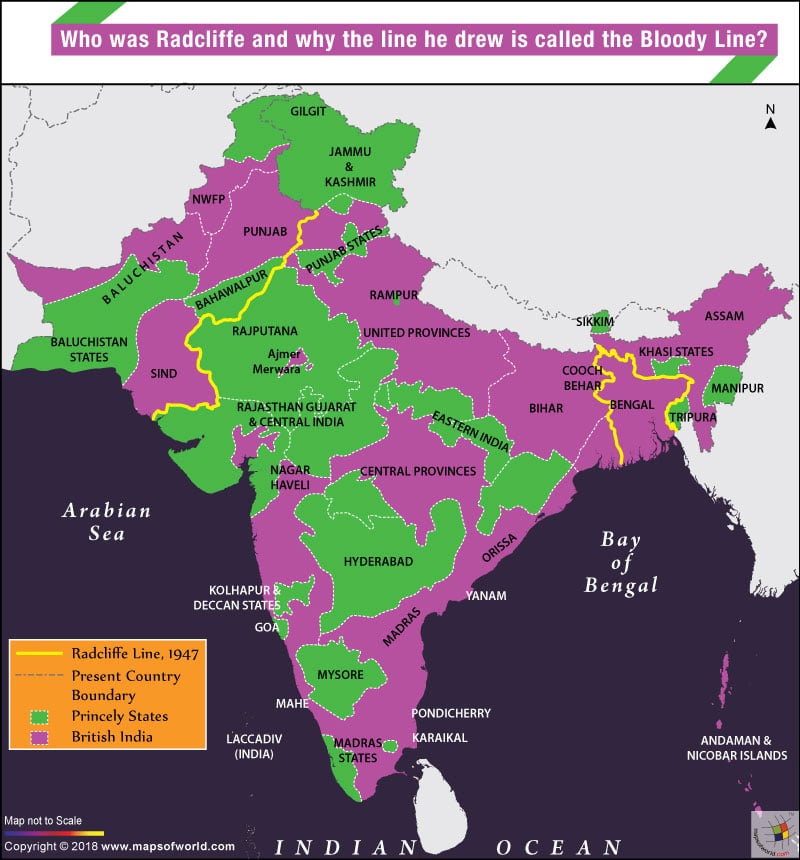 The British Government, to demarcate Provinces of British India that were to form part of the Union of India and those that were to go to the newly formed Dominion of Pakistan, appointed Sir Cyril Radcliffe, a Barrister, Chairman of Boundary Commission of undivided India in 1947. It was Radcliffe who drew the border between West Pakistan (now Pakistan) and India on the western side and between India and East Pakistan (now Bangladesh) on the eastern side of the subcontinent. The line came to be referred as the Radcliffe Line. What followed made many call it the Bloody Line.

India and Pakistan have since fought two major wars, in 1965 and 1971, and have clashed in Kargil, Jammu, and Kashmir (J&K), in 1999. Both countries remain hostile along the border in J&K with bloody clashes occurring frequently.

The aftermath of the Bloody Line
One million died as a result of communal clashes that broke out between the Muslims, and mostly Sikhs and Hindus, on India’s western border, and between Muslims and mostly Hindus on the east. Rape, mass murder, arson, and disease were widespread, as over 12 million displaced people tried to make it to safety on the other side. Muslims living in India made their way into the newly formed country of Pakistan, while non-Muslims, which included Hindus, Sikhs, Christians and other communities living in Pakistan, headed for safety in India.

The desperate refugees used any means to escape. They clambered on to whatever means of transport that was available to them at the time – trains, ox-drawn carts, bicycles. Trains, stuffed to capacity including rooftops, chugged across the border in both directions. Those without access to any transport simply walked.

Several trains were stopped en route and people slaughtered. Trains soaked in blood with just dead bodies began arriving on either side of the border on the west, communal clashes spread across cities, towns, and villages across the subcontinent. The areas of Punjab and Bengal were the worst affected. It was the most brutal period in the subcontinent’s history.

Revisiting 1947
The Indian Independence Act 1947 was passed on July 15th, 1947 by the Parliament of the United Kingdom to end British rule in India with effect August 15th, 1947.

Radcliffe arrived in India for the first time on July 15th,1947, just five weeks before India and Pakistan were to become sovereign nations. He had never visited India, had no knowledge of India’s political, socio-economic or geographical conditions. He was neither an administrator nor a cartographer, the maps at his command were outdated and not detailed enough, and he lacked the latest Census data to give him a better understanding of the social demographics.

With all these limitations and just five weeks to decide the fate of over 88 million people, Radcliffe had to proceed with the task of drawing a boundary that was doomed to fail and resulted in bloody chaos.

The Boundary Commission
Radcliffe arrived in India at a time when the political atmosphere in India was communally polarized with the Muslim League (ML) led by Muhammad Ali Jinnah and the Indian National Congress (INC) led by Jawaharlal Nehru. The Muslim League was adamant in their demand for an independent Pakistan and the INC had reconciled itself to a divided India.

Animosity and suspicion between the two leaders and political parties were at its peak. Communal tension had already resulted in clashes, and the British were eager to leave as soon as possible.

Bengal Boundary Commission comprising Justices B.K. Mukherji and C.C. Biswas representing INC’s interests, and Justices S.A. Rahman and Abu Saleh Mohamed representing ML’s interests.
Cyril Radcliffe was Chairman of both Commissions. None of the members of either Commission had any experience or knowledge of cartography, and none had exposure to the ground conditions prevailing along the line they were mandated to draw.

The entire process was executed in just five weeks, as Radcliffe was to leave India on August 15th, 1947, the day of India’s independence, never to return to see the outcome of his decisions.

Why did the British rush to exit India in 1947?
World War II had drained the British economy, and by 1944 the military was in no shape to handle the civil unrest beginning to take root in India.

The British government was nervous that the large number of returning Indian soldiers who had fought for the Allies under British Command were sympathetic to the Indian National Army (INA) led by Subhash Chandra Bose.

The INA was supported by the Japanese Army and had fought its way to Nagaland in the North East before being stopped by the British Army. The movement for India’s freedom had gained momentum and the British Government took a decision to exit India at the earliest.

Lord Mountbatten was appointed as India’s last Viceroy and mandated with overseeing the British withdrawal from the subcontinent before June 1948. He arrived on March 22nd, 1947, a time when people of the subcontinent were polarized along communal lines.

On March 27th, 1947, Muslim League observed Pakistan Day and this resulted in communal clashes breaking out between Muslims and non-Muslims. Mountbatten tried to mediate for an amicable settlement of the boundary between Indian and Pakistan but consensus could not be achieved as both sides had hardened their respective positions.

Mountbatten left it to Radcliffe to resolve the boundary question when the latter arrived in India on July 15th, just four months after Mountbatten’s arrival. Both were criticized for rushing a withdrawal and leaving it to the two newly formed nations to handle the aftermath.
The secrecy around the final border lines drew criticism. Radcliffe left India on the day it became independent – August 15th, 1947, and the territory allocation to the newly formed countries was disclosed only on August 17th, 1947. By then, the brutal clashes had begun.
In the end, the callous approach, poor timing, bad execution and hasty withdrawal by the British led to the poorly drawn Radcliffe Line turning bloody.

Visit the following to learn more about Indian Subcontinent: