What are the most Water Stressed Countries? - Answers 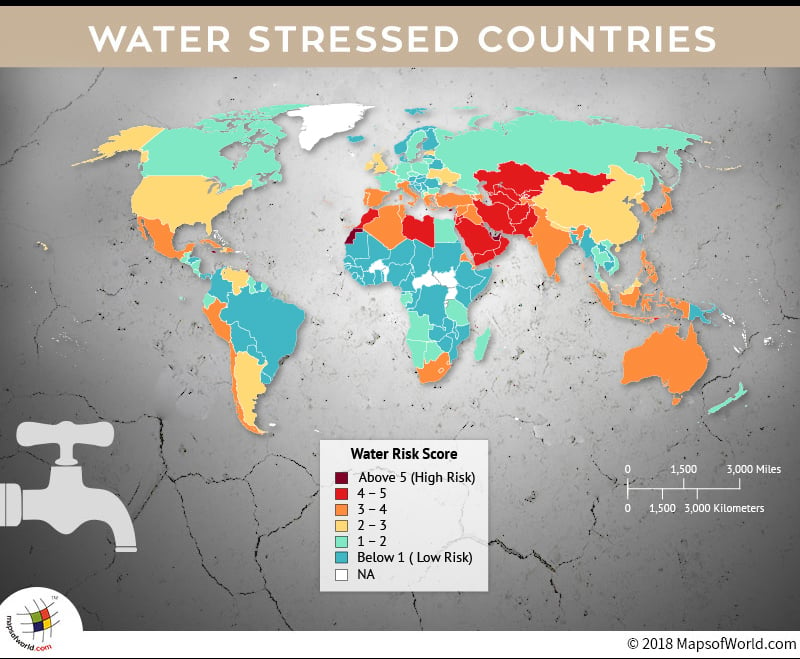 ‘Water Water everywhere, nor any drop to drink.’
The lines from the poem – The Rime of the Ancient Mariner, could soon be appropriate to describe the world’s condition.

The increasing population is a threat to mankind, as it may double by the year 2040. Along with it, the clean and drinkable water supply is already dwindling in various regions around the world. Some industrialized areas may have a plentiful supply, with water being available at an inexpensive price, but for many in under developed areas, water is almost a luxury.
Do you know that a data sourced by World Business Council for Sustainable Development, declares that half of the world’s freshwater supply is limited to only nine countries? These countries are the United States, Brazil, Colombia, China, India, Democratic Republic of the Congo, Canada, Indonesia and Russia.

Conserving water is the best plan if we want to secure the future of our planet. Currently, as one would have expected, it’s the Middle Eastern countries that are facing a high risk of water depreciation. To assess the water situation in 167 nations by 2040, the World Resources Institute (WRI) ranked and scored the future water-stress in these countries. WRI gave the nations a score between 0 and 5. With 5 being the greatest level of water risk, 0 was the least.
There are around 33 countries, with a score of 4 or 5, suggesting that they are in dire need of water conservation and face a high risk of being the most water-stressed in the future. Countries having the highest risk are; Bahrain, Kuwait, Qatar, San Marino, Singapore, the United Arab Emirates, Palestine, and Israel.

Yet, water conservation needs to be a top priority worldwide if we want to avoid it becoming scarce on our planet.

The table below provides information on the nations which would be the most water-stressed by 2040.